The old me would've said that picking one word to focus on for a year is stupid and pointless and not going to change anything.

The old me would've also had a very hard time picking just one word.  (Three cheers for indecisiveness!)

But then that me decided to do it, anyway, a couple of years ago basically because I was desperate for help from God and this was as good of an idea as any that I had, and my whole world got flipped upside down.  My mind was completely blown at the end of 2011 and 2012 as I looked back and realized that the word I had chosen for that year actually reflected the year's events.

My word for 2011 was peace, and my end of the year recap describes pretty well just how that changed my perspective and my life.  In complete (and totally unintentional) contrast to that, my word for 2012 was warrior, and with my baptism and the evidence on this blog of how much I grew in my faith during that year, I'd say that was just as effective as peace was.

So with that knowledge in mind, of course I wasn't going to miss out on the chance to see what one word could do for 2013.  However, to be quite honest, I completely forgot about it until New Year's Eve, and I spent the next 24 hours wondering what my word would be.  Then, I sat down and wrote last night's blog post, and this line came out:

"God, whatever You've got planned for me, I want it.  All of it.  The good and the bad, because You make beauty out of all of it."

I didn't start out writing that post expecting to say that, but I've learned that sometimes the best things are the ones you just stumble upon.  And with that line, I finally realized that I am to the point where I am ready and willing to do something that God has been trying to get me to do for pretty much my entire life.  I am letting go.

I'm releasing all of the stress, fear, burdens, everything that God wants to take from me that I've been too scared to let go of.  I know He is ultimately in control, so it's long past time I put myself second and let Him work without interference.  He's got me, I know that much.

I'm releasing myself from the problems of this world that seek to tie me down and keep me from living my life.  This world is not my home.  The people I love, even the ones who have hurt me, still matter, but they are not everything to me anymore.  They are not where my security or my self-worth lies.  I know where my home is and where my heart lies; all of this is just biding time until I get there.

I'm releasing myself from expectations, the ones I've put on myself as well as the ones others have put on me,  on being a Christian, a daughter, a sister, a friend, all of it.  All that matters to me now, or at least all that I want to matter to me, is the knowledge that God knows my heart and knows that I'm doing my best.  It reminds me of when Chris told me to just stop trying.

I'm releasing the grip I've had on the people that I love and was scared absolutely terrified to lose, people like my best friend Ryann who is moving back to California as soon as she graduates in May, because none of them were mine to keep in the first place. 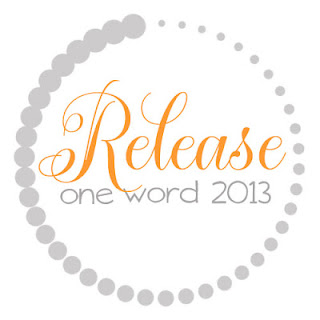 I can't wait to see what God is going to do with me this year.  I hope you'll stick around for the ride, because I just know it's going to be worth it.  I'm excited to have another year to document what I'm learning about God and about pursuing a relationship with Christ here on this blog.