The pain in my foot had been slowly improving over the course of the last week, you know, as it's supposed to, and it was honestly going better and faster than I expected.

Then, yesterday afternoon, I started feeling super intense spasms in the muscles and tendons right where my doc operated. And they just. wouldn't. stop.

So I started taking Tylenol and Ibuprofen on top of my Oxycodone, hoping that that would help, and nope, it didn't make a bit of difference.

By this afternoon, I was starting to get a little concerned, that maybe the couple of times I've stumbled and/or fallen had hurt my foot and messed up the recovery. Thankfully, my doc turned out to be the one on call this weekend (instead of his partner), and it took his office's call service about 60 seconds to get up with him and call me back.

Turns out, this is actually completely normal for what he did. I didn't know this because he didn't have to operate on tendons last time, but yeah. He said this is completely expected because he basically had to take the tendon apart to even get to the joint he needed to access. So this was a fun surprise.

This first week in recovery, however, has been much more difficult than I expected it to.

They did a nerve block for the surgery - which, as an aside, the only other time I've had a nerve block, they started it when I was already unconscious, but this time they started the nerve block while I was awake and HOLY CRAP, that hurt so freaking bad for them to do and it was also one of the weirdest freaking feelings in the world to have your lower leg go completely numb in a matter of seconds - and when the block wore off Saturday morning, I was in so much pain that the Oxycodone (straight Oxycodone, not Percocet) didn't do a thing for the pain for the next 36 hours, even though I'd started taking it while the block was still working like they'd told me to. 27 surgeries in, I have a pretty good grasp on how to handle recovery pain, and this was intense, even for me.

By Sunday night, though, that started to get better, and then the stomach pain from the painkillers set in, which took another three days to really get straightened out.

Plus, there's the whole issue of dealing with this scooter and the fact that I have the balance skills of a baby giraffe. A few mornings ago, I slipped off of it, tipped forward, and fell to the ground, landing directly on top of the metal steering bar. So now my entire shin, the same shin that has to bear all the pressure as I push myself around, is one giant bruise. 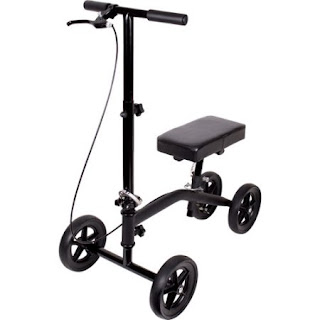 (This isn't my exact one, but it's very similar. My right shin landed straight on the vertical bar.)

The rest of this week has pretty much solely consisted of sleeping. Next week, I actually have to leave the house, so that'll be interesting.

Five weeks ago tonight, I was a nervous wreck, honestly. I was so scared heading into surgery because all I could think about were the words "cardiac arrest."

Tonight, though? I'm really just ready for tomorrow. I want to get on with things. Sure, I have a bit of anxiety, but I do before every surgery, which is largely because I've been through several with complications. The anxiety is minimal, though, which is a huge answered prayer.

Maybe it's because I've had so much going on the past few weeks once I got through the last recovery, or maybe it's just because God really is that awesome, but I have really been looking forward to this surgery this whole time and not dreading it, despite the fact that this recovery is going to be rough. This is definitely a huge answered prayer.

Now, I'm just praying that Mom is feeling well enough to take me. Partially because I have to be at the hospital at 5:30 am and I really don't want to drag my 79-year-old grandmother out of the house at 4 am (the hospital is that far away), but mostly because I just really want her there with me. (So far it seems like she's going, but that could change at the last second.)

This is all I have in me tonight..

This world is a sad and scary place sometimes.

I can't wait for the freedom of heaven.

Posted by Mallory at 3:30 AM No comments: