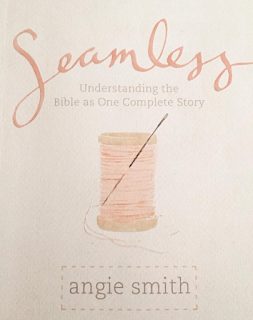 Oh man. This study right here, Seamless, this is one of the best decisions I've ever made. It's 165 pages of teaching, but also laughter and love and excitement and everything I knew I was missing but was too scared to go look for.  Because here's the truth, y'all: as much as I love the Lord, and as important as people know my faith is to me, reading my Bible has been almost non-existent. And it makes me feel like a complete fraud. It wasn't necessarily because I didn't want to, more because I didn't know where to begin and procrastination is the best way to protect a perfectionist from the pain of rejection and failure.

But I spent the month of June doing this study after it had been sitting on my shelf for years (and I only missed/had to play catch up on 3 days, which is amazing because I lack discipline), and now I can't wait to read more. I feel like I have the tools to begin without feeling overwhelmed, like it will make more sense to me and less like I'm reading gibberish. I love that I have this study and my notes from it to go back to to help keep people and details straight. I think that was one of my biggest issues before, and why it all seemed so confusing.

Starting out, I didn't know how Angie was going to fit 66 books into 6 weeks of study, but she did, and she did it so beautifully, and I couldn't be more excited. Now, it really does feel more like a love letter than anything. All the glory to God. 😊❤️

I have no idea what I'm going to do with my life next.

I was so set on applying to PhD programs, convinced that that was my next step, that I started telling everyone who asked that I wanted to be a college professor, which I really did (do?), but now that I didn't get into any programs two years in a row, and you need a PhD to do that (you can be an adjunct with a Master's, but they don't make enough to live on as a full-time income), I really don't know what I want to do or be now.

I know I'm going to start job hunting now, but what am I even supposed to look for? How do you apply for jobs when you have no idea what you want to do? I suppose I'm just going to apply for anything and everything, mostly because I'm desperate to get the hell out of this house and this town as quickly as possible, but it's really rather depressing because it feels like everyone around me either already knows what they're doing or has a specific goal in mind, and I'm in this weird fog in which I don't have the slightest clue what direction I'm headed.

You know what really doesn't help, though? The only people that are physically right here with me, the only people I spend time with, my family, don't seem to believe in me or that I can do it. My mom accused me of sabotaging myself from getting into Montreal because I "either can't or don't want to handle the anxiety of growing up," which is absolutely insane because all I want to do is be on my own. She wonders why I don't talk to her anymore about anything personal; it's because she says crap like that. My grandma has given me three separate lectures on finding a job close to home because she doesn't think I'll make it if I move far away on my own. And while I do enjoy proving people wrong, it's really exhausting. I know that I'm lucky to have friends all over the place who believe in me; I just wish I had someone right here who did.

Is the thought of growing up and moving out on my own? Yeah, of course it is. But my life has been filled with scary things that I've not shied away from and done anyway. I don't know why they're expecting this to be different.

But you know what? I was texting Jay last night (thank you, WhatsApp), and he reminded me that while ideally, everyone would have a supportive family, sometimes it just doesn't work out like that, and I can't let their disbelief affect my self-esteem. My worth isn't dependent on what they, or anyone, say I'm capable of. I just have to focus on who I am, the gifts that I know I have, and what I know I want and am capable of.

God's going to lead me in the right direction. I just have to have faith. Everything and everybody else is just background noise.

Posted by Mallory at 9:55 PM No comments:

Happy birthday to me. I guess?

I like other people's birthdays much more than I like my own. At least when I'm in this town with literally nothing to do and no one to see.

And Mom is in Chapel Hill for the night because she has big medical tests first thing in the morning, so it's just me and the dogs, TV, and a glass of honey whiskey.

The one upside to the day is that I have gotten a lot of texts and messages from wonderful people and FaceTimes with my two favorite soccer boys, so the day could be a lot worse. I'm definitely very loved.

Truth be told, I don't mind having the house to myself. I get to blast my music as loudly as I want to. :)

Here's to another year. Let's get it!

Posted by Mallory at 9:25 PM No comments:

The Story of Life

I was leaving the doctor office yesterday, and the lady checking me out asked me how I was. I responded, "Good in some ways, bad in others, but isn't that the story of life?" She chuckled and said, "Yes, yes it is." So shall I get to the good and the bad?

Good: My foot is doing really well. The two bad falls I had last week didn't do any damage to my foot. I got all my bandages off and the incision looked great. I was told I could get off the scooter and start walking on it (in a boot, of course), but here's what I was really looking forward to ---> He told me I can finally get it wet! I could shave my whole leg and wash my foot after 46 days of not being able to. The first thing I wanted to do when I got home was get in the shower and scrub the disgusting amount of dead skin off, but of course, I was inexplicably super lightheaded as soon as I got out of the car, so I had to wait a few hours. But still, once I did it? Once I got to shave my legs nice and smooth and wash my foot until it looked and felt like a real foot again? I was practically in heaven.

Bad: Montreal lost my application. Yeah. I know. I don't know how, but when I emailed the head of the political science department to ask why I hadn't gotten a response yet, he said they had no record of me ever submitting an application (even though I have a dossier # from the email I got confirming that my application was submitted successfully). So he told me to send the dossier number to this lady and she would look into it. I did that, and she told me today that that dossier number does not open any folders for them so all she can tell me to do is contact the registrar. Now, the registrar's website is so confusing I'm not even sure that I emailed the right place because there were like 12 to choose from, and even if I did it will take up to a week for them to answer, so I'm probably going to have to call them tomorrow and awkwardly use my French for the first real time in three years on the phone with an actual French-Canadian. THIS SHOULD GO WELL. And to boot, I have until June 15 to tell the Residence Department if I'm not coming if I want to get a refund on the $389 Mommom put down for my first month of rent. So I emailed THEM asking if there was any way to get an extension on that deadline because I don't have an answer because the freakin' university lost my application and I'm trying to get it straightened out but I don't know how long it will take. But who knows what they'll say to that. So basically, I've been waiting and waiting on this school thinking for once I was being patient and that's a good thing (yay maturity!), only to find out that no, I'm being screwed over and didn't know it and am now running out of time to fix it.

All of that Montreal stuff happened today and yesterday. By the time I got the email from the lady today telling me they had no folder on me and to contact the registrar, I had to wake Mom up because I was having a panic attack and she's the best at talking me out of one. Then, she gave me Ativan because, as she put it, "You are NOT having another seizure tonight!"

Now, I'm going to do my Bible Study for the night (I finally started a real study!), maybe watch a Netflix documentary (I made a list of all the ones I want to see on my phone - because I'm weird), and then go to bed. Stress is draining.