The past two weeks haven't exactly been blog-worthy.

Not that anything in my life really is lately, yet here I am, eight years in, still rambling about the pointless happenings of my life, but I guess that's a discussion for another day.

But surgery recovery is especially mundane. I didn't put on any clothes other than pajamas or leave the house for a solid week after the surgery, and I've only left a couple times since that day.

The good news is that recovery is going well. My foot is healing well and feeling better by the day. This is the minor surgery of the two I have to have, so it's good that this one is out of the way and that it seems to be successful and proceeding well. Fingers crossed it stays that way.

Speaking of two surgeries, I did get the other surgery scheduled this week. It will be April 21. A lady canceled her surgery the same day the scheduler called me, so they were able to get me in way sooner than I expected. I am thrilled about it. It's going to be a much more complicated surgery and a much longer and more difficult recovery, so I just want it done and over with.

The fact that I should be fully recovered by my birthday is just icing on the cake.

Can you tell I'm bored out of my mind?

One down, one to go.

Had my surgery this morning. #26. I know. Try to contain your jealousy.

It was successful. No more steel in my left foot.

Doing about as well as can be expected.

Aside from the time I was under anesthesia, I've been awake since 11 am yesterday, so that sucks. Hopefully I will sleep soon.

I'm glad this is over.

Now that it's over, I can heal.

The sooner I heal, the sooner we can get on to the right foot surgery, the much more complicated surgery.

The sooner I get to that surgery, the sooner I can start to heal and maybe get back to my normal and be able to walk semi-reasonable distances.

I want to start walking around the neighborhood for exercise, but I have to have working feet for that.

One step at a time, I guess.

Hopefully by my birthday in June, this will be over.

Post-op appointment is in ten days, so we'll see.

One step at a time.

My brain can hardly comprehend it.

I would move mountains to keep this boy safe and happy.

He is wild and exhausting and stubborn and sometimes frustrating, but he's also sweet and snuggly, fearless and free, smarter than most people think he is, and the silliest, funniest little boy I know.

I could not be more proud to be his Auntie Mal.

Keep dancing, Blake man. I love you to the moon and back. 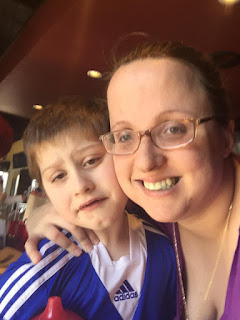 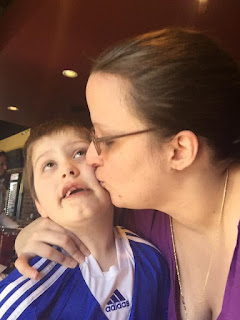 These are so awkward, but hey, you try taking pictures with a sugared-up seven-year-old. ;)

At War With Myself

I should be going to bed right about now, but I need to get this out. (Also, I'm listening to Ed Sheeran's new album for the first time, and I don't want to stop.)

Okay, so remember how I mentioned that video I got from one of my soccer boys for Valentine's Day?

Truth time: I still have that video saved to my phone and have played it I-don't-even-know-how-many times in the past two and a half weeks.

Every single time, it makes me smile as wide as my mouth can stretch and gives me this warm feeling of being loved that is like wrapping up in a blanket on a cold day, but there's also been this recurring thought that I really, really wish would get out of my head.

I see my brother's face in the video, and I hear him saying the words "I love you," and as though it's out of my control, I think, I don't know how I got this lucky. It's not supposed to happen like this for me.

Three and a half years of knowing him and the rest of my brothers, and a large portion of the time, my brain still cannot wrap itself around the idea that I actually deserve their love. It still searches for answers as to how a "girl like me" got chosen by "guys like them," why the good-looking and popular athletes who could have the attention of anyone on campus decided to love the semi-outcast, not conventionally gorgeous girl with health issues. Why did they pick me? I keep asking myself, as if that's something that really makes a difference after all this time.

Besides, I already know why they "picked me." I already know what they love about me. It's not like they've kept it a secret. They've told me time and again why they're grateful to know me and why they love me. They've never once made me feel like I was their "charity project," like a lot of people in high school treated me," yet I somehow still have trouble just accepting what they have told me, even though, in my heart, I know it's true. It's not like I don't believe they're telling me the truth. It's just that part of me still doesn't understand why it's true.

The good-looking, popular guys used to always be the ones who made my life hell. That's exactly why I was scared of these soccer boys in the beginning, and I've told them as such. I didn't think they could actually care about someone who was so completely different from them and anyone they usually hung out with. But when I learned they really were different from all of the others, when I learned they actually were who they appeared to be, the question became why are they wasting their time? That was the same semester my seizures came back; it would've been a hell of a lot easier for them not to bother with me than to invest in me and my life on top of everything they had going on.

Instead, Chirag and Justin sat at the ER with me for hours one day.

Justin and Bryce picked me up from the ER another day then spent close to 90 minutes taking care of me.

Bryce - how many seizures did he take care of me through between soccer and Reformation??

Isaiah brought me drinks when I was too sick to even leave my room.

Reafe, Tunji, Ricky, and Isaiah showed up to be my bodyguards.

So many of them carved time out of their schedules to spend time with me, whether it be lunch or dinner.

They were always there.

Some of them are still always here.

And they've never even wanted a thank you for any of it.

I have a soccer ball sitting on my shelf signed by almost every boy from that year, a daily reminder of the memories that we share. I haven't forgotten any of it. So why is it that I still sit around wondering why I'm even in this position? It's been almost three and a half years. Will I ever accept this love, whether or not I think I deserve it? They believe I deserve it; isn't that enough?

One of them has reminded me many times that they all love me to death. He knows my insecurities, a lot of them do, and they've never judged me for them or been put off by them, so it's not that I'm afraid that I'm going to ruin things. It's just frustrating. I'm tired of spending time wondering why instead of just enjoying what I have.

It's been three and a half years. Is this ever going to make sense? Will I ever believe that I'm enough, that I deserve to be loved, that there doesn't have to be some crazy explanation for "guys like them" to love a "girl like me?"

"We accept the love we think we deserve." - from The Perks of Being a Wallflower...if this is true, Lord, please let me believe I deserve this, because I'm tired of my head being at war with itself.

I am crazy loved by some amazing guys who are the best friends a girl could ask for.

And that's more than enough.

Posted by Mallory at 1:19 AM No comments: