Well, so much for the whole not ignoring my blog thing. Oops. What can you do? I'm here now. But last night was a wonderful night that I want to remember. 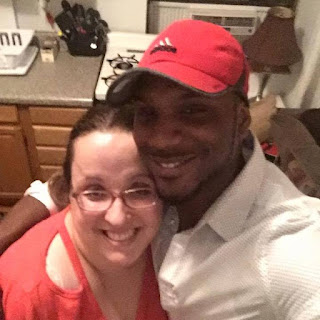 This is Al. I met him through my buddy August because they're both bouncers at a bar down the block. We've only known each other for a couple of months, but it feels like from the very beginning we've just clicked. He's made me feel so completely safe in a way that most people don't realize is really hard for me to find. Even though until last night we'd only ever spent time in person together standing outside his bar, we've had this connection in talking to each other that can't be manufactured.

He's someone that just shines light. No matter what kind of day I'm having, if I go and see him, as soon as I look at him, and he smiles, I can't help but smile, too. Anyone who knows me knows that a great smile is my favorite physical feature on a guy, but it's so much more than that with him. He shines because of how much he loves people. It's just who he is.

Last night, we just met up for a drink and sat and talked for a little over an hour. I felt like time crawled in the best possible way because it did not feel like it had only been an hour when he had to leave. We talked about everything, our stories, our pasts, politics and my thesis, history, our friendship, more than you could possibly think one could fit in an hour. I think I must have been beaming the entire time. He just has that effect on me. And when we instinctively reached out and grab each other's hands multiple times while we talked, or when he insisted on holding my hand on the way back to my apartment, everything just felt so right and normal and safe.

The craziest thing to me is that he is one of the people I am going to miss the most from this city, yet of all the people I'm really going to miss, he's the one I've known the shortest amount of time. Some people just make sense in your life from the very beginning; it certainly doesn't feel like I've only known him for two months. I'm closer to him than 90% of the people I've met in the past two years. He has done so much good for me in such a short amount of time.

I firmly believe that only God could orchestrate a friendship that has formed and strengthened as quickly as this one has. And while I don't know what the future holds and if or when I'll come back to New York, I know for sure that I am so, so lucky to have found him.

And the best part is that while things are going to change not being able to see each other every week, I know that no matter where we are, this isn't going away any time soon. We've already promised that much, and he's a friend whose promises I can actually trust.