And it's only Wednesday.

Sunday was the first seizure I've had since February 2nd. That was the longest streak I'd had since this whole mess started back in September 2013. And this seizure was a bad one - my mom said it was top 5 of the worst she's ever seen me have. And it was in the shower, one of the worst possible places to have one. Especially because it means that my still recovering foot was unprotected, save for the waterproof cover I put over it in the shower, and slammed directly into the wall of the tub when I slipped out of my shower chair. So that was bad enough.

Then, Monday morning, I got up out of my recliner to go let my barking dogs out, I was adjusting my knee on my scooter, my scooter went backward, I went forward, and I fell forward to the ground directly on top of the metal bars of my scooter. That left my leg looking like this. 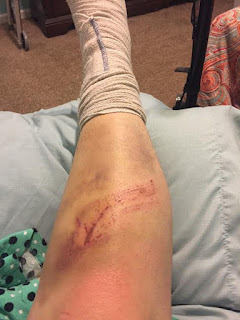 Actually, that's what my leg looks like tonight, after it's had about 60 hours of icing and elevation. Monday morning, it was even bigger and looked like it had Jello in it. Yeah. I actually went to Urgent Care yesterday evening because I couldn't get into an orthopedic doctor anywhere (my primary care doesn't have an x-ray machine) and was seriously afraid that I had fractured something. As it turns out, I just have the world's worst bone bruise on both of my leg bones. And I also have to get an ultrasound because the doc is slightly concerned about a blood clot in my leg for a few different reasons, so that's fun.

This coming Monday is supposed to be the "get the bandages off, yay I can start walking and getting it wet again" post-op appointment for my foot. I am just praying that neither of these nasty falls did any damage to my foot that would prolong my recovery. I don't think they did, but you never know with me. I can't do anything simply. It's like my body waited until the final week to start self-destructing.

It's been a rough week. I'm tired.

Posted by Mallory at 7:36 PM No comments: 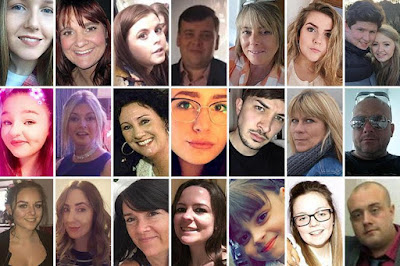 These are the 22 beautiful souls who died Monday night. Children and teenagers and young adults went to a concert and never came home. Parents went to pick up their kids after a fun night out and instead left them parentless. It's just not fair. My heart has felt so broken all week for their families, loved ones, and communities, the city of Manchester, those at the concert left unharmed but traumatized by the events, and Ariana Grande and her team. I can only hope and pray that they feel the love and support of the world behind them.

My heart is broken that a terrorist attacked again, even more so that he targeted a concert mostly full of children, teens, and young adults. No child should go to a concert of a singer they love and idolize and not make it home safely. This is not what music is. But once again, humankind proved that love is louder than hate, and I'm thankful that people across the city worked together to help the victims, their families, and those stranded in the city. England is a place that is very special to me, and all my prayers and love are with those in Manchester recovering from this tragedy, and with those across the UK whose loved ones were lost in this horror.

Rest easy, brothers and sisters. May you be welcomed into heaven by the King of Kings Himself. We'll see you soon.

So, I had a panic attack because I thought I was getting another MRSA infection yesterday.

I ended up having Chelsea (who thankfully was in a good-for-her mood) take me to the ER because Mom wouldn't because I was not willing to mess around and was in unbearable pain and hadn't slept for more than 24 hours. But Mom was convinced from the start I was overreacting so she refused to do anything. Of course. Including go and pick up the antibiotic my doctor called in.

They took my cast off at the ER (and put me in a hard splint when I left) and couldn't see any obvious signs of infection, just major skin irritation, so all they could do was get my pain down to a more manageable level and help the nausea I was having (because of the pain) and send me home. My doctor's office will be calling me tomorrow to get me in for a much sooner appointment than the one I originally had set up for two weeks from now.

Then, my uncle so graciously came and picked me up because Chelsea had no gas and my grandma was still incommunicado (I later learned she was at an all-day Bingo thing, so it all made way more sense). And we picked up the antibiotic on the way home, so I have that.

I feel like an idiot for going through all that for no real results, but damn, can you really blame me? My mom's ego trip was not worth more than my desire to make sure my health was okay. We'll see what my doc says whenever he gets to see my foot in person.

Monday, I had my first post-op appointment. The doc said everything looked great. He took the original cast off, took x-rays, removed the stitches, and then re-wrapped and re-casted it. Look what color I got! 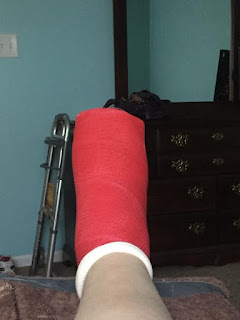 It dried and ended up being the perfect shade of Wolfpack red, which makes me unreasonably happy. It's a silly, small thing, yes, but if I have to have this thing on my foot for another four weeks, I might as well have a reason to smile when I look at it, right?

Yesterday, I must have caught Mom in a really good mood or something, because she agreed to get me two early birthday presents that I really want. First, it was this. 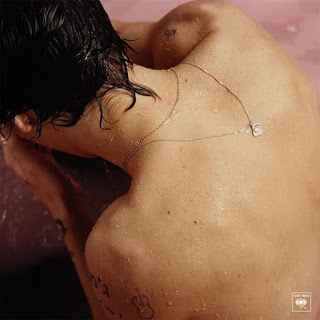 Yes, that is Harry Styles' new album. I am ridiculously excited about it. A couple songs from it have been released already, and they are SO GOOD. I can't wait for the full album to be released on Friday.

Then, there were these. 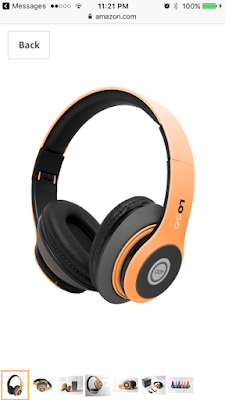 Orange bluetooth wireless headphones. I need them because my headphone jack is broken and I can't get an upgrade/new phone until December. They're a really nice brand, too; they were on sale on Amazon for $20 when they were originally $90. They'll be here next week, and I can't wait to try them out.

Gotta find happiness wherever you can get it, right?