Ah, sweet Revenge.  It's been a long time coming.

My Wolfpack.  My sweet, sweet Wolfpack.  I didn't know if this season could get any better than when we beat the Blue Devils two weeks ago.  Turns out, IT TOTALLY CAN.

The only team NC State fans dislike more than the Duke Blue Devils would be the UNC Tarheels.  We had 13 straight losses against them going into tonight, so UNC fans had their egos in high form despite the fact that for the first time in I don't even know how long, we're ranked and they are not.

NC State fans have been waiting a loooooooooong time to see this. 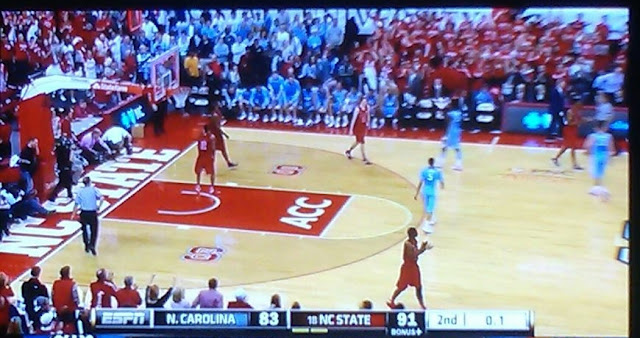 And that's not even the most accurate portrayal of how this game went.  We were up the entire time, at one point as much as 28 points!  It was ridiculous.  And while it may not be the most Christian thing for me to do, I am thoroughly enjoying celebrating this because on top of all the UNC fans, I had to deal with just about all of my friends who are Duke fans cheering on the Heels, their "only real rival" because "NC State doesn't matter".   Right.  That's why every Duke and UNC fan I know keeps up with our record obsessively and celebrates our losses.  Mmhmm.

So yes, I am especially stoked right now.  Last year, we made it to the Sweet Sixteen, and if we keep this kind of play up, this year is going to be even better.  I love my Wolfpack!!!! :)

I'm sorry, but that was totally the highlight of my day.  NC State hasn't beaten both Duke and UNC in the same season in 10 years, so this was beyond epic for a lifelong Wolfpack fan.  Wolfpack pride, it runs deep. :)

Aside from that, I have had a very productive day.  I got all of my homework done aside from the Public Policy stuff.  I'm going to read the two chapters I need to read for Paper #2 before I go to bed tonight, and then hopefully I'll be able to write the paper while I'm at the Tutoring Center tomorrow since, from what I've been told from other tutors who have done this before, basically no one ever comes in on Sundays.  Thankfully, the paper is only two pages.

I better get started, though.  This new med plan is definitely doing the trick in helping me sleep longer and more soundly, as well as slowly improving my head pain, so I want to make sure I can get this done tonight.