Today...agh.  I felt like I was about to bust out in tears from the minute I woke up knowing that Paddy was leaving today.  Never has a weekend flown by so quickly.

But y'all know me, I can't stay focused on the bad stuff or my brain kind of goes into overdrive, so I decided to put a positive spin on it.  I was getting time with Paddy, Matt, my mom, and Holly all at the same time.  I finally got to introduce Matt and Paddy after spending the past 4 years telling them about each other; the verdict is in, I wasn't just imagining it in my head, they really are the American and British versions of each other.  Which I suppose is only fitting because they're the only two guys that consider me their little sister. :)

So yeah.  We basically just got ready and hung out until Mom got here about 12:30.  Holly and Matt, both habitually late people, actually beat us there, but that was probably due to the fact that we got stuck behind a tobacco truck going 10 mph for a bit and then Mom missed a turn.  But anyway, we got to Ruby Tuesday about 1:30 and I got a huge hug from Matt.  The interesting thing about him when he's not in a relationship is he's much more vocal about stuff like, for example, how excited he is to see me.  So he was stoked.  And that made me grin like a fool.  Man, I love that kid. 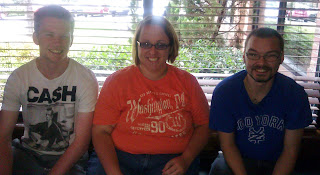 :)  I got this while we were waiting to be seated.  My boys.  I know they're not "mine," but that's just what I think every time I look at this picture.  It was honestly a little surreal to be with both of them at the same time.    Then, we got seated, I got an awesome steak, and we spent over an hour just laughing and talking.  Matt barely ate because he couldn't stop acting like a goofball.  He and Paddy got along great, though.  We left there just before 3:00, but of course, I had to get some pictures. 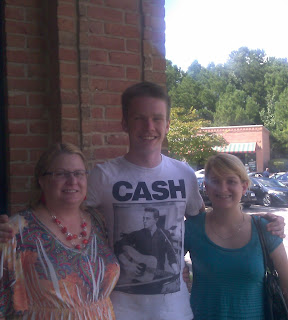 He looks like a giant next to them, hahaha. 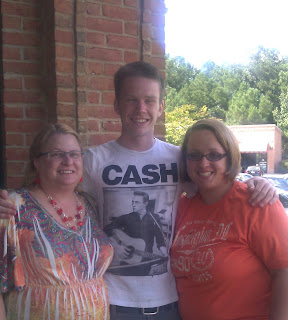 I think it's safe to say he's Mom's second "adopted" son. :)  It was adorable, he was genuinely excited to see Mom. 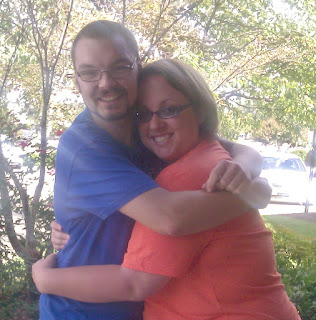 And this is because, well, I get a picture with Matt every time we get together. :)

Seriously, that lunch with everyone was so much fun, I really forgot that Paddy was leaving.  Well, I don't know that I forgot he was leaving, but I forgot to be sad about it.  I mean, Matt and I, our relationship just keeps getting better and better.  I'm so proud of seeing how far he's come, finally breaking up with Simone (for good!), realizing he'd gotten himself in a cycle of drama and leaving.  We literally have grown up together.  Ten years later, and this kid still knows me better than anyone on the planet.  It's so beautiful.  I realize again and again just how blessed I am to have him in my life after everything we've been through.

After that, we found a grocery store because Paddy promised some buddies of his that he'd bring them back some American chocolate, and he wanted to get this seasoning salt that some guy he stayed with cooked on his chicken and he said it was amazing.  Luckily there was a Harris Teeter fairly close to the restaurant.  I don't think I've ever been in a Harris Teeter before today, random fact.

Then, we drove by the house of one lady he stayed with because he left a jacket there and it had a present he brought for me attached to it.  It was a button for his band Orange Pulp.  :)  It's now attached to the front of my purse, where everyone can see it.  What can I say?  I'm a proud sister.

Then, we took him to the airport.  He gave me like five hugs and a kiss on the cheek before he went inside.  I really thought that was when I'd start crying, because I HATE HATE HATE goodbyes, especially when they're with someone that I barely ever get to see, but I didn't.  I guess I was just overwhelmed by realizing how blessed I was that I even got to see him period.  A plane ticket from England to NC is really, really, really not cheap, but he did it.  I got to see my British brother whom I haven't seen in 4+ years, and until he made these plans official, I honestly didn't think I'd get to see him anytime soon.  I know it was his birthday present (his parents paid for half the ticket), but this weekend felt like it was a present for me, too.

Then, Mom just drove me back to school.  I did laundry, and showered and shaved, and finally did a little bit of French homework!  Haha, I don't know that I've ever gone an entire weekend during school without doing any homework before, but I think this time was a pretty good excuse.  I wasn't going to miss time with Paddy to have my head stuck in a book.  Priorities, right?

And to top off this absolutely amazing weekend, The Vespers debuted their newest music video for "Lawdy."  And I finally cried.  I know I don't exactly have an unbiased opinion when it comes to these kids (haha!), but this video is truly one of the most amazing things I've ever seen.  It's pure, raw, unadulterated artistry, in both picture and sound.  I couldn't be more proud to know them.  They inspire me every day.  Watch it and let me know what you think. :)