I got up at 6:30 and got ready and went down to the hotel restaurant to eat breakfast...not knowing the convention was providing breakfast upstairs for free.  Of course.  At least the food was good.

At 8:00, the LGBT Caucus started, and I was SO excited to get to hear Zach Wahls speak.  You may or may not know who he is.  He's a now 21-year-old guy from Iowa who got Internet-famous at the beginning of last year when this video of him went viral.

One week he's a 19-year-old college kid in Iowa talking to the State House about why the marriage of his two lesbian moms is just as valid as heterosexual marriages, the next week the dude is on Ellen Degeneres.   Ah, the power of the 21st century.  This video now has over 17 million views; I watched it again tonight since I got to see him in person today, and it still makes me cry.

Anyway, I have been a huge fan of Zach since I first saw this video not long after it hit the web.  So getting up that early was more than worth it for me.  There were a couple of other speakers before him, and it was just a really powerful and moving and still funny meeting.  Zach, though...that kid seems like he was born for public speaking.  It's a good thing he put his environmental engineering degree on hold for public speaking and a book deal.  Can you imagine getting all of that from one Youtube video?!

I haven't seen very many speakers who could blend humor and seriousness as seamlessly as he can.  I was nearly in tears at one point and laughing loudly at others.  The best part, though, was getting to talk to him afterwards.  To most of us, it felt like we were meeting a celebrity at first (because, well, we kind of were), but he's just real, down-to-earth and so funny, he put us all right at ease.  I had actually met him last night at the reception, and when I asked him if I could get a picture there, he responded, "Well, uh, can we do it tomorrow when I'm not holding a glass of whiskey?"  That's just who he is.  So when he was standing around talking to about 10 of us adoring girls, Jillian asked for a picture first, and I was standing right next to her.  After I took one for her, Zach asked me if I wanted one, too.  I responded, "Yes, of course.  After all, you promised me one last night."  And he laughed and replied, "Yes, yes, I did! You remembered!" 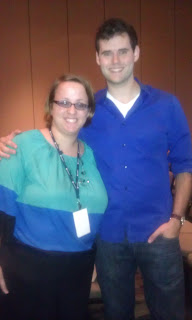 After pictures, I mentioned something from his speech, where he talked about some Conservatives that his family with two moms isn't a "real" family, and I said, "I come at that from a different perspective.  My dad died when I was 7."  He immediately responded, "Well, I guess you don't have a real family then.  Too bad for you!"  And all of us cracked up.  Jillian and I got to talk to him for about 15 minutes after the rest of the crowd trickled out before he had to go start digging through his ginormous email inbox.

Okay, that's all the Zach stories.  I promise.  It was just such an honor to meet and talk to him, I can't help but ramble on a bit about it.  He and Duke were hands down the highlights of the convention for me. :)

After that, I wasn't really interested in any of the caucuses that were going on, so I went back up to my room and took a nap until Louis texted me to bring my suitcase to the boys' room so they could take it down to the car.  Then, I went to this training session on using digital media, but Chris interrupted before it started and said we were leaving.

Yeah, I was disappointed.  Apparently Louis and Chris were unhappy with the planning of the weekend and they weren't interested in staying, which basically meant I had no choice in the matter.  But oh well, at least I had some good memories from the time I was actually there.

We left about 12:15, stopped at Cookout for lunch (my first time there, delicious!), and got back to Campbell about 3:45.  I spent the rest of the day dealing with drama (not important for now, please don't ask), unpacking, and generally just trying to wind down.  Thank God this is Labor Day weekend because I'm gonna need the next two days to get caught up on all the homework I have from missing classes Friday and getting the reading done for this coming week.  I gave myself tonight off, though, because it was a really long day.  I did do laundry, though, so at least I did something productive.

Now, I'm off to bed.  My first political convention is done.  I'm really happy.  This field is definitely where I belong.  :)