So today, in between all the reading I had on my to-do list, I went to see Ryann and the Campbell Women's soccer team play Marshall (yes, as in "We Are Marshall").  I left about 3:25 because it takes me about 15 minutes or so to walk to the soccer field, which is literally about as far on the other side of campus as you can get from my dorm and still be on campus, and the game was due to start at 4:00.  Well, about 5 minutes after I got there, a guy got on the microphone and said "Ladies and gentlemen, the start of today's game has been temporarily delayed."

Uh, what?  The sun was shining and the clouds were white as cotton, so it wasn't the weather.  What else could it be?

Did I mention the sun was shining bright?  Because it totally was.  Thank the Lord there was a good breeze and I brought water with me because I don't think I could've sat there even longer than necessary without it.  It was hot, as it usually is in NC in September.  It's a good thing I kind of like Ryann a little bit because I wouldn't have sat there in the heat for an extra hour for just anyone. ;)

So yeah.  There was my humor for the day.  The game started just after 5:00, and it was amazing.  We were up 3-0 after 14 minutes.  I don't remember the last time I saw something like that.  We ended up winning 4-2, so yay for that.  And there was a feast afterward for everyone to enjoy, which means I got to hug this lovely girl. 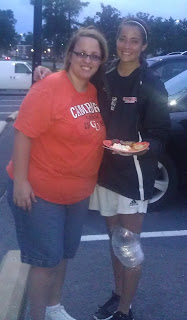 85 minutes of soccer (she sat out the last 5 because her knee was killing her) and an icing knee and she still looks gorgeous.  Totally not fair. :p  I love this girl to pieces.  Mom's pretty much adopted her as her 4th daughter, too.

After that, it was a shower more reading.  I only got through one of my two chapters for Comparative Foreign Government, so I'll have to read the other one tomorrow.  It'll probably take me a good three and a half hours. Boo.  Then, all I'll have is a two-page paper to write on Wednesday.  I won't be able to do any work on Thursday because of the DNC trip (which is going to make me be awake for close to 24 hours), and then Friday Paddy arrives.  YAY.  This week is going to be so, so amazing, even if I am dead tired by the end of it.

I live a blessed life.  No question about it.