It's 2:30 am, and this is literally the first chance I've had to blog all day.  I've never been so happy to be this exhausted.  Today was really, really great, but I'M SO TIRED.

So, uh, yeah, Paddy and I went canoeing this morning.  We were in the back lobby last night playing pool and Kristen, the 3rd floor RA, came in and I introduced her to Paddy, and then she asked if we were doing anything today, and we didn't really have anything planned, so she invited us to the event she was hosting for the dorm: kayaking and canoeing.  Paddy said it sounded fun, and I readily agreed without thinking about how physically hard it would be.

But anyway, we got up this morning, ate breakfast, and I packed my lunch while Paddy went to go buy one from Subway down the street.  (YAY! There's now a Subway within walking distance.) We met the group at 10:30, and headed to a 400-acre "pond" in a nearby town.  Kristen said she was really happy Paddy would come because there was only one other guy there because he was driving one of the vans, and they were so nice and unloaded all ten canoes and four kayaks off this giant rack thing down by the pond.  They saved us so much work! :) 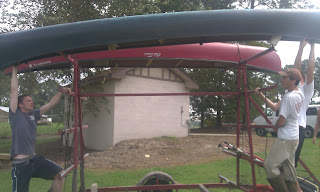 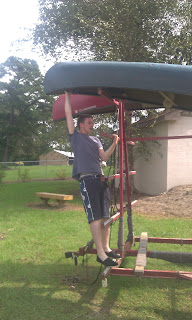 The boy comes all the way from England to visit me, and I put him to work. :p  Anyway, then we all went all over the water.  It was really pretty and SO big!  Paddy was nice and shared a canoe with me even though he wanted a kayak because I didn't want to embarrass myself in front of anyone else.  Haha!  I don't know  why I didn't realize until I was actually doing it just how hard rowing a canoe actually is!  We only did it for about an hour before lunch and my arms felt like jelly at the end.  I also managed to peel a layer of skin off part of my thumb simply from sweating so much and rubbing it against the oar.  But surprisingly, it was actually really fun!  And we didn't capsize, so there's another plus. ;) 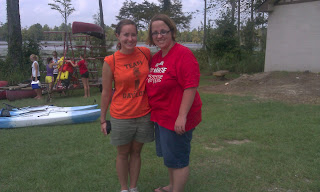 This is me with Kristen.  This is our 3rd year in the same dorm and we've never taken a picture together before! 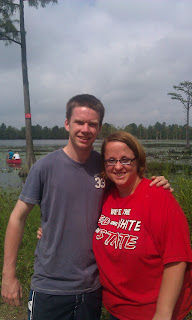 Anyway, after we all ate, no one really felt like going out again because we'd all pretty much gone over the whole pond, so we came back to campus and got here around 2:00.  Paddy and I both took showers; he because he was so sweaty, me because I was soaked with dirty water.  After that, I just went down to Louis's apartment and hung out with them as Paddy got some stuff sorted out about where he'll be living while he goes to school this year.  Then, I took him to Chick-Fil-A because he loves it and we needed dinner.  I also took him to the bookstore and he got a Campbell t-shirt to go with the other university t-shirts he's gotten during his travels the past couple of weeks.

Well, he also needed a t-shirt because I took him to Campbell's football game! 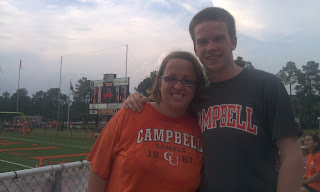 He's gotten quite the fascination with American football the past couple of weeks.  They don't have cheerleading for sports in the UK, so he and the other British boy (who's a student here for sports) thoroughly enjoyed a front row shot of the cute and super talented cheerleaders. 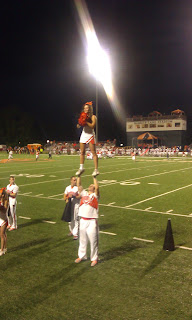 This is actually my friend Drew (the one I met at the Anniversary Ball last October) and his stunt partner.  Our cheerleaders are so good.  I have immense respect for the physical strength they must have.  Then Gaylord showed up, and since Paddy rode a giant camel yesterday, he had to get a picture with the "live" Gaylord (though we actually do have real live camels come to some of the games). 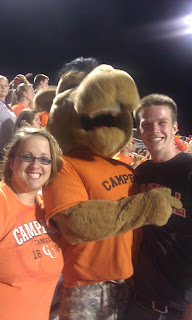 I didn't realize until afterwards that Gaylord was pretending to twist Paddy's nipple.  Ha.  Of course.  Now he can say he's been felt up by a giant camel. :p

We came back to my dorm for a minute so I could show him some pictures.  As I was walking from "checking him in" with the lobby attendant (told you, strict rules on the opposite sex in dorm rooms), he noticed all the whiteboards hanging next to people's doors, so he asked if he could write on one of them.  I said sure because, hey, why not?  It erases. 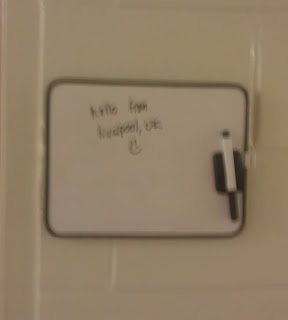 I know it's really blurry, but it just says "hello from liverpool, uk :)"  haha, silly boy.  Whoever lives in that room is going to be confused.  This is what he wrote on mine when I wasn't looking. :) 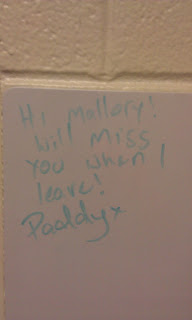 Then, he went to a bar with that same girl he stayed with on Thursday, so I stayed in my dorm.  I hung out for a few minutes getting caught up on Twitter and whatnot before I saw that sweetheart Alex was coming down to the Creek for the night.  So yay!  I got to see him, too.  That boy...agh, I am crushing on him bad, I have since last semester, but I'm okay with the way things are.  I really have no expectations because he was clear from the beginning where his head is.  He's so sweet and genuine and was there for me time and time again this summer.  He really is one of my best friends, which is crazy to me because I didn't meet him until March, and we didn't really start hanging out until April, and then by May when I was home he was totally there for me through all of the family drama.  And of course, since he did TFAS last summer, we ended up talking at least once a week during that.  Things just click with him, even just in terms of our friendship.  I wanted to get a picture with him, but he only had a few minutes to talk before he had to go meet his friends and there was no one around to take it, so oh well.  I did get four hugs in a five minute conversation, though. :) 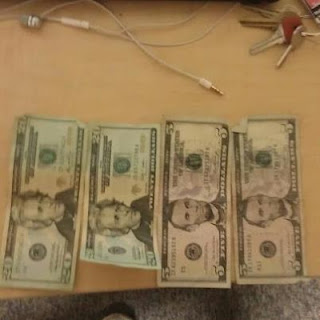 Oh yes.  Since this was the first time I've seen him since May, I finally got the money he owed me from that bet back in June.  So yay money.  I needed it.

Then, I was seriously planning on coming back in and taking a shower, but as soon as I posted the picture of the money on Twitter (he knew I was gonna brag a little bit :p), my friend Summer messaged me and she ended up inviting me over to her apartment for pizza and so I could tell her about Alex.  That turned into an hour and a half of girl talk.  Haha!  What can I say?  She and I get along really well.  So I didn't even get back to my room until just after 1 am, and then I took a shower and blowdried my hair and answered a few messages, and then yeah, I blogged.

And that is the end of today's recap.  It's now 3 am, and I need sleep.  I have to get up early (for me on a weekend) tomorrow to help Paddy finish packing (haha, of course. boys.) before Mom gets here.  Then, we're going to Cary and meeting Holly (and probably Michael) and Matt for lunch.  Ah, I get to spend time with Matt and Paddy together.  That's going to be interesting.  The only two guys who openly call me their little sister. :)