My brother is here!

I've gained a few readers over the past few months, so here's a little explanation as to who my "brother" is for those who need it.  If you remember me talking about Paddy, feel free to skip this bit.  Okay, so this? 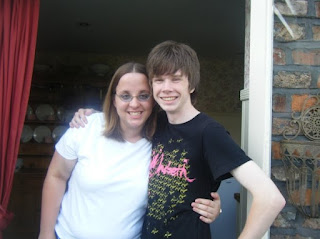 Is me and Paddy back in July 2008.  We were both 16 there, me a month after my 16th birthday and he a month before his 17th.  This was taken one of the first days of the exchange trip that some students at my mom's high school took to Liverpool, England.  My mom was helping her best friend chaperone it, and she somehow got me permission to go along, too.  Mom and I stayed with Paddy and his family. 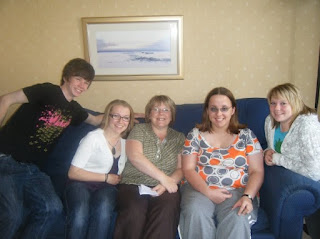 (His dad was taking the photo.)  Search Liverpool on this old blog and I'm sure you can some of me reminiscing about this trip.

Well, anyway, from pretty much the beginning of that trip, I fit right in with this family.  Eleanor and Sara (second from left and far right, respectively) felt like what sisters were supposed to be.  I called Marie (middle) Mum from the start.  And seeing as I was crazy about Matt at this point, he didn't quite feel like my brother back then, so Paddy was my first experience at feeling like what it meant to have a brother.  Everything just fit.

This is when I thank the good Lord for Facebook and Skype because aside from Jay, these beautiful people are the only ones I talk to from that trip anymore.  Mum told me multiple times this year how proud of me she was for doing my internship in DC.  She still calls me her "American daughter."  We are family in every way that counts.

Well, Paddy actually went on the exchange trip the year before and came to America, so he has a bunch of friends over here that he missed.  He's in college and has a full-time job, so he's been trying to save up money for quite a while.  His 21st birthday was a couple weeks ago, and his oh-so-generous parents agreed to pay for half a plane ticket for him to come to America for two weeks. :)

I've been busy with school and the College Democrats convention, and Mom was just getting back to work and could only come up to see him on a weekend, so since he had so many people he wanted to see, he was traveling all over North Carolina from the day he got in until now seeing people, and then a girl who was on the exchange trip the year he came to America and actually goes to Campbell hosted him last night, and she drove him over to my dorm about 12:30.  :)

Louis and his roommates are being incredibly kind and letting him crash at their apartment since Campbell has very strict rules about the opposite sex in dorm rooms.  Luckily, their apartment is right down the street from me.

Anyway, as soon as he arrived, I dropped his bags in my room and we headed off to my two afternoon classes.  I had Comparative Foreign Government first, and the funny thing was that our "case study" for the week is Great Britain.  Paddy said that he actually learned a lot he didn't know about Britain's government!  Then I had Municipal Government, and Paddy said Dr. Mero made him laugh and he was fascinated to see what "American uni" classes are like.

After that, I had to go run and check my mailbox, and then we took his stuff down to Louis's apartment so they could meet.  We hung out there for a bit, then Paddy said he was hungry, so I took him to Jole Mole for some good, greasy, Americanized Mexican food.  Crazy boy thought I was going to let him spend money when I could put it on my meal card!  He said the chicken quesadilla he ate was the best thing he'd eaten the whole trip.  Hahaha, boys are so easy to please when it comes to food.

Then we walked down to the Convocation Center (which is basically a really fancy phrase for the sports arena) because he wanted to see it and it was locked last night when he tried.  This may be the best picture I've ever taken of him. 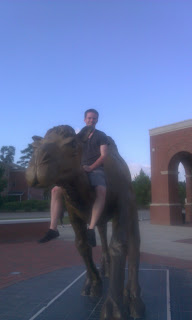 That would be Paddy, sitting atop the giant bronze camel that stands outside the Convocation Center.  He was so funny, he thought he was going to get yelled at despite the fact that I told him people take pictures on it ALL the time.  And he made it his new profile picture on Facebook just for me. :D  I'm sorry, I see that camel all the time but I find watching my British brother climb on it and grin so proudly hilarious. 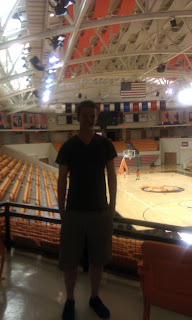 Then I actually took him inside the arena (which is actually named for my Uncle Ed and Aunt Dinah's son that died when he was 4) and I believe his exact words were "I've never seen anything like this before, not at a college!"  Sorry you can't see him well, the lighting is really weird in there when there isn't a game and it looked like this with and without a flash.

Then, we came back and played pool for like two hours, and laughed pretty much the entire time.  Yes, he beat me every single time.  Small tip: If you know you have horrible coordination and motor skills, don't play pool against a guy who plays it after work and on break almost every day at the pub where he works.  But hey, most of the games he only beat me by 2 or 3 balls, and one time it was only by 1 ball.  Luckily he's nice and didn't laugh at me. :p

We talked about all sorts of stuff while we ate and played pool, but after a couple hours of that, I was starting to get a headache, so we went down to Louis's apartment.  He and Deagan were hanging out, watching Risky Business (Deagan has an obsession with the '80s), and eating Freeze Pops.  Ha.  (Side note: I had NO clue Risky Business was about a high school kid that started a brothel in his parents' house.)  After that, we watched Catch Me If You Can with Leonardo DiCaprio, and I haven't seen that movie in so long it was like I was watching it for the first time.  It was a lot of fun.

Then, we went to go get Paddy another quesadilla, but Jole Mole changed their hours this year (lame!) so they were closed, so we each got a slice of pizza instead.  By this point it was close to 11:00, so I came in to  take a shower and he went to Louis's apartment.  We're getting up early tomorrow (for a Saturday, anyway), so we need sleep!

If you wanna know what we do tomorrow, well, I guess you'll just have to read the blog. It wouldn't be fun if I ruined the surprise! ;)

Oh, yeah, this is us today. 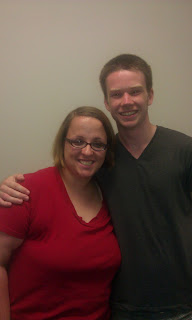 Love my brother.  So, so much. :) <3  I don't know how I could be any happier, but I'm fairly sure my heart is going to explode when I get to have him AND Matt at the same time on Sunday.