The good kind of crazy.

Well, because of my much-later-than-expected night last night, I slept in until it was time to get up for lunch.  They were actually serving us lunch, so yay for not having to spend money on that meal.  The lunch break was two hours, so I went back to my room and hung out until the training sessions started back at 2:00.

Then, I went to a training session about campaign invasions.  It sounds way cooler than it actually is; invasion just means a whole group of people go into a town or a part of a city and start knocking on doors.  It was pretty cool, though.

At 3:00, there was a "Meet the Candidates" session, in which we were able to ask questions of the people running for positions on the National Board, but since all the candidates were running unopposed, it was more like "Meet the New Officers."  Haha.

At 5:00, we broke for dinner.  There were extra sandwich bags (with chips, an apple, and a cookie) left over from lunch, so I got one of those for dinner.  The turkey was really good.  I just hung out in my room until the dinner break was over because I seriously was exhausted.  Thursday night was really rough.

At 7:00, I went down to the hotel bar where CDA was having a reception.  They had chips and this really good cheese dip. This girl came up and introduced herself because she heard me say I was from North Carolina when I asked a question at the "Meet the Candidates" session.  Her name is Jillian; she was really nice, and we spent most of the night hanging out and talking.  While we were sitting there, she noticed Rob, the Youth Vote director for Obama for America, talking to some guy we had never seen before, and she wanted to know who he was.  And seeing as I'm not shy, like, ever, I basically just got up, walked over, and when there was a break in the conversation, I asked who he was.  He said his name was Duke, and Rob said he was a surrogate for Obama.  We talked for a few minutes about what it's like to work for the President and actually get to meet him and talk to him and shake his hand (seeing as Obama is one of my heroes, I was enthralled by the conversation), but then he had to give his big speech.

Rob introduced him, and one of the first lines out of his mouth was "This is James Duke Mason.  He's the son of Belinda Carlisle of the Go-Go's."

Turns out "Duke" is actually a quite famous LGBT activist.  He gave a really beautiful speech about why this election is so key for the Democratic Party, and it's about a lot more than gay rights.  Afterwards, we talked off and on, because he had lots of people to meet, and when I wasn't talking to him, I was mingling with the crowd and meeting lots of great people.  At one point, he and I were both talking to a couple of guys, and Duke looked over at me and said "This is Mallory" not knowing I'd already met the guys before.  One guy just randomly came up and introduced himself to me; I still have no idea how he knew who I was.  Then all three of them started talking about how "inspiring" I am because I'd ended up talking to all of them about how passionate I am about fight for rights for the LGBT community.  Which I personally find ridiculous knowing what Duke has done all by himself, but it was very flattering.  I had a great conversation with Duke about how this issue is important to me, even as a heterosexual woman.  But everyone there was just great.  I had a lot of fun.  I stayed down there until about 9:30 when I was just really tired.

The coolest part?  Before Duke left to go get a late dinner with Rob and some other OFA staff, we traded cell phone numbers and email addresses.  He's hoping to get back to NC before Election Day, and he said he'd love to come speak at Campbell.

I have the contact info of a celebrity and the son of one of the most famous female singer-songwriters of all time.  That guy might come to Campbell.

Seriously, y'all.  How is this my life?!

The ending to the night was absolutely unexpected and so, so crazy, but it's the kind of crazy I like.  The good kind of crazy.  The kind of crazy that makes your jaw drop and makes you lose the ability to think of any words other than "God, You are so awesome." 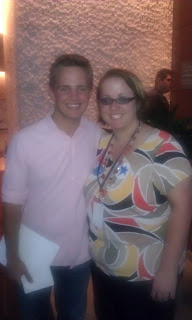