Reunited! And it feels so good.

Yay Vespers night.  I've pretty much been counting down to this night since I found out it was the day they'd be back in my area.  I love them, what can I say?  They're like my family now.  How could they not be?  After all we've been through together in the past year and a half, after everything that's happened in 2012 alone, I'd say it's pretty understandable that I consider these 4 kids my brothers and sisters.

To make it even better, my lovely friend Morgan drove me, so we got to hang out, too.  I don't get to see her enough, so it was nice to get some girl time in.  It's about a 45 minute drive from Campbell to the cafe where the show was, so there was plenty of time to talk.  We didn't get there until about 6:40, and it was like God decided to give me a special blessing because even though there was already a nice sized crowd in there, there was one table right on the front row still open.

The band was getting ready in a back room, so Morgan and I just sat there talking.  They started playing about 7:30, and right as they started I got a notification on my phone from Twitter.  This is what I found. 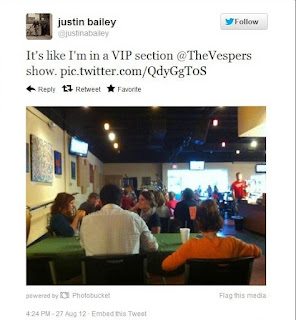 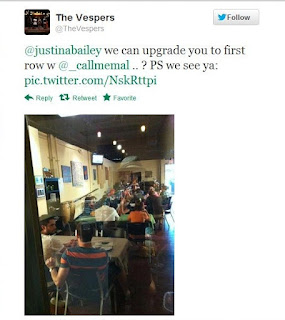 At first I was really confused as to what the band was referring to, until I found Justin's tweet.  Then, I saw his picture and realized he was making a joke about the seats he and his friend had, at the back, to the side of the stage.  That guy in the striped shirt in the second picture is Justin, next to him is his friend Johno.  Bruno took that pic through the window in the door of the room where they were getting ready.

Well, being me and not shy about talking to pretty much anyone, once I figured out where he was, I basically just walked up to their table and was like, "Hi. Is one of you Justin?"  He said yes, and I invited them to come sit at the table with me and Morgan.  They said, "Oh no, we're fine." And then I said "It's fine, come on."  And he said, "....well, do you have space?"  So Morgan and I got to sit with two cute guys for the whole show. :)  They were excited.  It seemed like I made their night, which always feels good.  I mean, that's all it took? :)  They're Seminary students at Wake Forest, which is RIDICULOUSLY hard to get into and very impressive.  I might have new people to hang with when the band comes back around, which is always awesome.  Sorry, no pictures of them, though.  I didn't want to be THAT weird. ;)  They were kinda freaked out when I just walked up and knew one of their names at first, and then Justin looked at his phone and saw the reply from Bruno.  Haha, I may be odd, but I'm not a stalker.  Or a psychic. :p

Johno took this picture of me and Morgan.  You know me.  I love pictures with my friends. :) 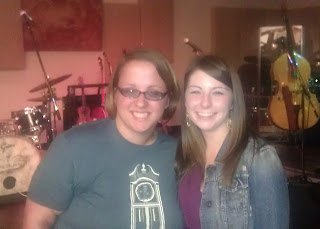 After the show, we basically just waited for a bunch of the people to get their merchandise and then get it signed and leave.  Once we got near them, I, of course, got hugs, and a picture. 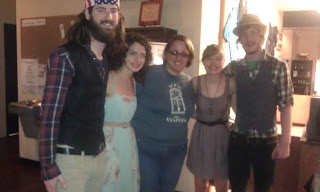 Yeah, I know Taylor's head is cut off.  Blame Morgan and the fact that he's ridiculously tall. :p

I also got to meet "Intern Caitie" and it was nice to put a face to the name I'd been hearing for a while.  She's their manager now, pretty much.  She knew who I was, too, which was kind of funny and also humbling. :)  I spent a good bit mostly talking to Taylor and got another t-shirt to add to my collection.  Because 3 just wasn't enough! 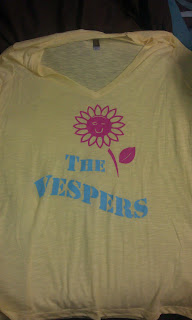 I think it's my favorite one so far. :D  Looks like I know what I'll be wearing to class tomorrow!

Hi, my name is Mal, and I have a problem.

A problem I'm totally okay with having, by the way.

We left about 9:15 because Morgan has class early tomorrow, and then got kind of lost on the way back but it ended up only taking us about 15 extra minutes, which was good because her GPS wouldn't cooperate and both our phones were dead.

And what would a good Vespers night recap be without a video of some of the most talented people I know performing?  I actually took this to make a couple special people who couldn't be here smile.  Might as well pay forward the blessings these four have given me over the time we've known each other. :)