I barely slept last night.  I didn't even get in bed until 1 am, and for some reason, it's now impossible for me to fall asleep without laying there for at least half an hour first, and then I got up at 6:30.

I'm fairly sure I've said this about a thousand times, but I don't do well on less than five hours of sleep.  Truth be told, I can partially thank the medications I take for that one.

But it is what it is, and I got up and went to class.  And then both Ryann and the other guy in our French history class were sick, so it was me talking to Dr. Steegar in French for 50 minutes by myself.  I've never had a one-on-one session with him like that before.  Immediately after that, I had French lit in which I had to translate pieces of a work from the 12th century (and that's just when the first written account is from, the original story is from the 9th century).  Luckily the French was modernized, but the story was SO BORING.  It was like Beowulf minus the crazy sci-fi monsters and stuff.

Then, I came back to my room and took a nap from 10:30 to 12:00.  I got up, went and ate lunch, and then went to Comparative Foreign Government and Municipal Government.  Luckily both of those professors are lively enough that they kept me from falling asleep.

Knowing that if I took another nap, there would be no chance of me sleeping at a reasonable hour, I forced myself to stay awake by doing lots of random things for a couple hours.

At 5:30, I went and had dinner with Louis, my friend Summer who has magically become a Democrat, and Deagan.  It was so much fun.  We spent two hours just talking politics.  I have a great group of friends.  It's nice to be around people who love to talk about the same stuff you do.

Then, I came back and rewrote some notes because the original copy was really messy.  After that, I started doing laundry and packing and whatnot because YAY, we leave for the College Democrats of America Convention in Charlotte tomorrow afternoon.  I'm so excited!  I plan on taking my computer with me in case I have time to blog at the end of each night, but if not, don't freak out, we'll be back late Saturday night, and I'll update as soon as I can.

Okay, I'm tired.  (Gee, I wonder why.)  My laundry is done and I've packed all that I could, so I am going to bed.  These pictures are just some more from the cookout, but they were taken by a girl from the school paper who obviously had a really nice camera.  I'm posting them because I like them better than my crappy cell phone pics, and because a couple of them make me laugh. 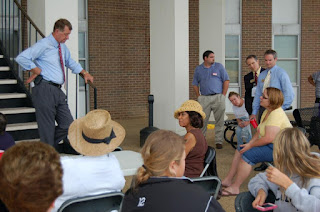 Oh yes.  I asked questions.  And yes, that's plural.  What can I say?  No one else was talking and it's a US Congressman!  I love how Brad and Steve and that other lady are watching me so intently. 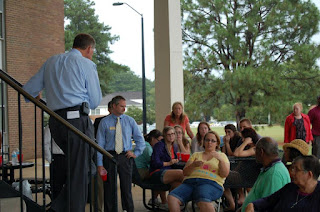 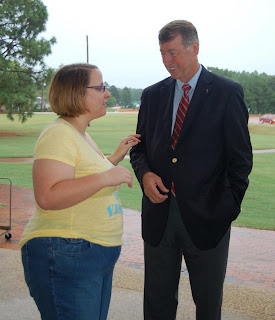 Louis said I'm in like half of the pictures that have Mr. Etheridge in them.  I find that awesome, and totally plausible.  I love him, Mom LOVES him, and it's a US CONGRESSMAN! 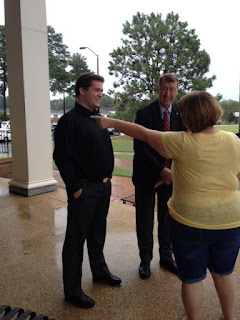 This one cracks me up because I have absolutely no memory of pointing so awkwardly like that. 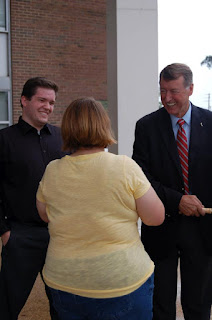 Louis posted on Twitter that this picture is "perfect on so many levels."  They are totally cheesing, so I must've been saying something hilarious.  Which is funny, because I don't remember what I said that could've been that funny, either. 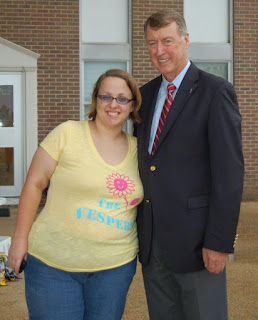 I love this picture.  It's my new profile picture on Facebook. :) 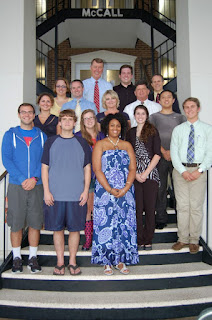 At the end, the people who were still there got to take a group shot with all the candidates and Mr. Etheridge. 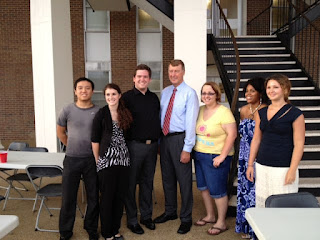 A brighter shot of the officers. 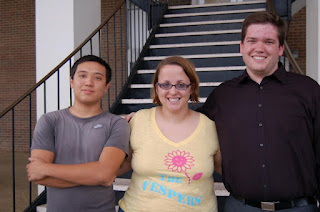 Chris, me, and Louis.  The invincible trio. :D  I kept calling them "my boys" and I have no idea why.

Convention tomorrow! But first, Human Diversity and a meeting with Dr. Thornton, and a 3 hour car ride.