Today could not have gone any better for the Campbell Democrats.

Street Fair was a huge success.  The Harnett County Democrats totally showed up and provided a tent and tons of desserts for us to give out.  Plus, Steve Wilkins (running for US House in the district Campbell is in), Brad Salmon (running for this district's State Senate seat), and Joe Langley (running for this district's State House seat) all came and talked to people hanging around our area.  AND the county field organizerrs for Obama for America came and helped register people.  We registered 50 non-Republican voters (no, we didn't intentionally leave out Republicans, that's illegal, we just never dealt with any) and 85 people signed up for the club.  That is hands down the biggest turnout Campbell Democrats has ever had at Street Fair.  The Chair of the Harnett County Democrats kept talking about how thrilled they are that a Democratic party is actually doing something useful on campus.

I was manning the table the entire time because of my feet issues, and that was not easy by myself because there were that many people around.  At one point, I had five people trying to talk to me at the same time.  But it was SO MUCH FUN.  I am definitely in my element here.  We met some great freshmen, too, who seem to be really enthusiastic, this one kid in particular, which gives us great hope for the future of the club.

I got some pictures with the candidates, but then I was an idiot and deleted them when I was trying to email them to myself off my phone.  I did steal this one from Facebook, though. 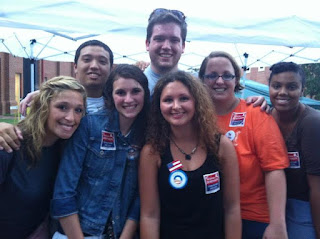 From left, that's Courtney (Communications Director), Chris (Vice President), Jordan (Treasurer), Louis (President), Scarlet (Chief of Staff), me (Secretary), and Bria (Historian).  We really work well together.  I am so honored to be a part of this team.  Until us, Campbell appeared to be a one-party campus.  We've done more together so far than I think the Campbell Democrats have done in the past 4 years combined, and it's only the second day we've all been on campus.  More than that, though, we're not just a team of officers in a club; we really are friends.

It's amazing how tired I am right now when the fair was only two hours and all I did before going to help set up at 5 was get my new ID and my books (and I actually like my new ID picture! first time for everything).  So I'm going to go to sleep now.  I'm SUPER grateful for the fact that I don't have to be anywhere until 11:30 tomorrow, and that's to have lunch with Ryann.  I can't wait to see her!!! :D  Then, I have Human Diversity (my one required Sociology class) at 12:30.  Then, who knows what.

I'm going to do my best not to get into political topics on this blog, but I will be talking a lot about what I do with this club.  It's going to be a huge part of my life from now until November 6th, and I couldn't be happier about it.

It's a really good feeling when you get to go to bed with a huge smile on your face.