It's past 3 in the morning, and because I'm insane and decided to do my laundry after getting back in the middle of the night instead of, oh, I don't know, going to bed, I have to wait for my laundry to dry, so I need to recap how amazing this night was.

Carter-Finley Stadium will always have a piece of my heart.  I always feel so much closer to my dad when I am there, and there's just something about being surrounded by 58,000 fans screaming at the top of their lungs for a team I've loved all my life that gets me so excited I was literally jumping up and down on the way into the stadium tonight.  And it was perfect football weather: low 60s, slight breeze, a night game so no sun.

On the way into the stadium, we were stopping by the T-shirt stands so we could each get a new T-shirt, and the most random thing happened: I ran into my cousin, Melissa, who I seriously have not seen in about a decade and met her husband Stephen for the first time (they got married in 2007 and have since had 2 boys).  How does that even happen?!

Since we got our tickets only two weeks ago, the seats we had were up in the rafters in the visitor section, so we decided to try and snag some of the handicap seats on the main level.  We've done it before because there's almost always someone who doesn't show up.  Well, this time, the guys who actually had tickets for our seats did show up, but they were such gentlemen that they let me and Mommom stay in the comfortable stadium seats and sat in these foldout white chairs next to us.  We had good fun talking to them throughout the beginning of the game.

I always love seeing the Marching Band perform, aka the Power Sound of the South.  And let me tell you, they live up to the name.  They are ridiculous. 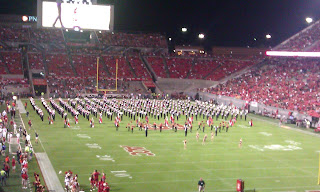 Then, the game....well, uh, the first half was just painful.  Our offense got nothing done, and our defense could not hold off Florida State's incredibly fast offense.  At halftime, we were down 16-0 and I seriously felt like I was at a Campbell game.  Ha!  The second half was a totally different story, and the score was 16-10 in the middle of the 4th quarter.  People slowly started pouring out, giving up (remember how people did that at the Maryland game last year???).Then, a miracle happened, and we got an interception with about two and a half minutes left.  We got a touchdown with 16 seconds left on the clock.

The stadium was ROARING.  I may very well have no voice tomorrow after screaming so hard in the 4th quarter.  It was so worth it, though.  It was worth screaming my head off to irritate the FSU fans who stood behind us talking crap the entire first half. :)  I LOVE MY WOLFPACK.

And to make it even better, I literally ran into Richard Howell and Lorenzo Brown on the way to the bathroom.  As much as I love Wolfpack football, I think I love Wolfpack basketball more, especially after us making it to the Sweet 16 in the NCAA this past spring.  And Richard has always been one of my most favorite players on the team, so to meet him was kind of a dream come true.  He was so nice, too, and so very humble when listening to me talk about how much I love him and the team!  (Yes, Lorenzo is on the phone.  College boys. :p) 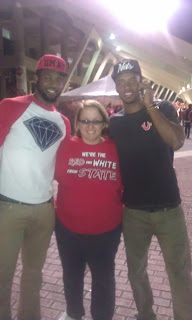 Needless to say, with the game starting at 8, we didn't even get out of the handicap parking lot until about 12:45, which meant we didn't get to Campbell until 1:45.  I SHOULD have gone to bed, but I decided to do my laundry because tomorrow is going to be busy.  I know I'm crazy, you don't have to tell me.

And to put the icing on the cake of this amazing day, I went and picked up a new poster frame, so my newest Vespers poster from the best week of my life is now framed in its rightful place on the wall in my room. 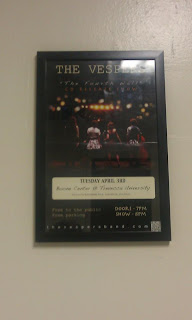 Now I have to go fold laundry.  It's no wonder I can't sleep.  I'm so happy I feel like I'm still on an adrenaline rush!