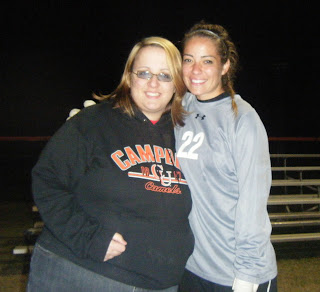 The wicked talented athlete, the girl with model-worthy looks, the fiercely protective friend, the girl with a crazy sense of humor and wit that not everyone gets?  Yes, her. 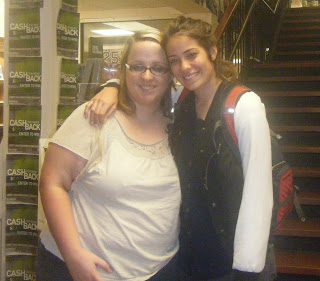 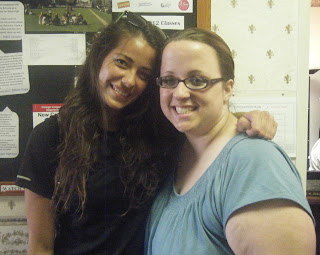 I am SO lucky to have her in my life.  It's still so new to me, having a girl friend like this.  It is such a good feeling to know that there is a girl that is so protective of me she gets mad at a guy she's never met just for hurting me.  We are different in a lot of ways, that's for sure.  The biggest one is something I've realized just in the past few days in that we process things very differently.  She's a thinker - she sees things as very black and white and logic-based - and I'm a feeler - I react to things happening in my life based on my emotions.  So it's good that I have someone who's always there to give me a reality check and force me to look at the logical side of things, but who is also willing to understand me to the point that she understands why I act and react the way that I do.

We both have taken all the crap we've dealt with in the past and allowed it to transform us into better, stronger, more independent women.  And for every way that we are different, there are five ways that we are alike.  We laugh at things other people wouldn't understand.  We finish each other's sentences.  We aren't afraid to act like complete goofballs with each other because we are who we are and we're not afraid of it.  We will do absolutely anything to protect each other.

She is, hands down, one of the strongest, most capable, most athletically talented people that I have ever met.  But she's also got one of the biggest hearts.  She is willing to go to bat for the people that she loves and never forgets the people who push her down the path anyone who knows her knows she is destined to be on.  I'm honored to be one of those people because I know she is meant to do great things.  And if there's anyone who could achieve the goals she has for herself, it's her because she also has an extreme determination and knows how to fight for what she wants.

We both have had issues of letting people past walls we've built up, especially girls, and I think it's because of that that our friendship just clicked right from the very start.  Once I realized that I could trust her, I let her in where no other girl in my life has ever been.  She was the first person I ever knew besides Matt who forgave me when I failed her.  She loved me through all the screw-ups.

We spent a couple hours doing French homework tonight to get ready for our test Monday, and during that we were able to talk about the Brennan thing.  It was exactly what I thought - she doesn't trust him after everything that happened because she's protective.  She said I was being stupid because she thinks it's dangerous.  She was never angry with me, but once I explained my heart, she understood why I reacted to everything the way I did because she knows I can't give up on anyone.  I was able to tell her things I've felt about that situation, and she just got it.  She knows I will fight for anyone that I care about because I've fought for her.

Beyond all the serious stuff, though, we know how to have FUN.  We know how to make fun out of really simple things, like playing pool with a warped table and bad sticks.  We laughed until she literally fell over on the floor and cried "My abs! My abs!"  Our senses of humor are so similar that we can be complete dorks with each other and know that the other person will think we're hilarious.

She is the kind of friend that you keep for the rest of your life.  We've already promised to be bridesmaids at each other's weddings, and I just know that we are going to be walking through this life together, cheering each other on, picking each other up, and pushing each other forward when we're so tired we feel like quitting.

And I, for one, can't wait to see what's in store for the both of us.  I am so proud to be her best friend, and I am so grateful to have a girl who believes in me when I don't believe in myself.

Even if she is a girl who smacks herself in the face with a pool stick. ;)