Today was a day that was six years in the making.

Today was the day I returned to church for the first time since September 2006, when my hometown church essentially kicked me out.  When that happened, I was already in such a downward spiral of depression that I didn't really need another reason to not want to believe in God, but that just sort of solidified it.  I figured there was no point in trusting churches because people were just mean, and at first, I thought that I could still be a Christian without going to church.  You know the saying, "Going to church doesn't make you a Christian any more than standing in a garage makes you a car."  Well, then with all of the subsequent medical trauma that happened over the next few years, I lost my faith entirely (as you well know), so needless to say, years went by without me stepping foot in a church really quickly.

When I had to go to that church service for my Intro to Christianity class, I didn't pay attention to anything other than what I had to take notes on, so I just don't really count that.  So aside from going to Christmas Eve service last year (which I'm pretty sure I fell asleep in the middle of), and when that same church who treated me so badly asked me to speak in January (which wasn't even a real service), I have not gone to church in 6+ years.

Truth be told, I've known this day was coming for a while, I just didn't know when.  It started that night at Sanctuary, when I realized that there were actually still churches out there full of people who would lift me up.  That was the first time I remember thinking that maybe I could open myself up to a church community again.  Well, the end of school was crazy, and the summer in DC was crazier, so I just didn't think about even maybe going to church much at all.  During that time, Brennan told me over and over about how I needed to lock myself in with a body of believers, and I was in such a weird/bad place at the time that I couldn't even ponder what good that would actually do.  The thought stayed in the back of my mind, though, (good thing Brennan is just as persistent as I am) and I had this deep-down feeling that soon enough I would be going back to church.

Then, I came back to school, and from the first time I met up with my friend Elizabeth, she started asking me to come to church with her.  I wanted to, but I just couldn't let go of that fear.  I didn't see it as fear at the time - things just kept getting in the way, too much homework, sick, out of town - but looking back, I know that those were all just excuses for the fact that I couldn't let go of how afraid I was of churches.

Then, one day, one of my favorite bloggers, Linny, posted a link to a recording of a talk that her husband, a former pastor, gave at their new church (they're just members there).  I love her blog, and I know a bit about her husband, so I was curious to watch it.


Let "It" Go from Phoenix First on Vimeo.

It's long, so don't worry about watching it if you don't want to.  The important part is that when Dwight got to the point in his talk where he spoke about "laying it down" and how God asks us to lay certain things down because He has something so much greater waiting for us, I felt God speak to me four simple words:

Lay down that fear.

Well, as soon as that video was over, I knew what I had to do.  So I called my friend Elizabeth and asked her to take me to church with her this Sunday (today).  And then I texted a few of my friends to keep myself accountable (because the people pleaser in me knew that if they were expecting me to go to church on Sunday, that would keep me from backing out).

I'm fairly certain that satan was trying to get to me last night, because I was trying to get up with Elizabeth while at the game last night and her phone was off and I had no idea what time she was picking me up today.  I knew the service starts at 11:11, but I also knew she gets there early to work the coffee bar, so I just had no idea what time to expect her, or if she'd even remember to pick me up!  I ALMOST freaked out, but then just decided that if I couldn't get up with her this morning, I'd go to the church right off campus by myself.  Nothing and no one was getting in the way of me.

I didn't get to sleep until 5 am this morning, but I still managed to get up at 8:00 and call Elizabeth.  She didn't answer, but thankfully, she called me right back.  She had forgotten to turn her phone back on after going to the movies yesterday, hence the no answer last night.  Once I knew what time she was coming, I figured I'd just stay up and get ready.  Of course, seeing as she is Elizabeth, she was 15 minutes late, but she picked me up at 10:00.  This is where the day got cool.

The church?  An old theater. 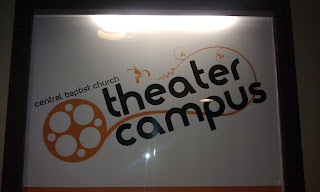 Hence the name Theater Campus.  Elizabeth quite literally called it "Theater Church."  So, awesome.  It felt way less informal.  I walk into the main room, and next to the coffee bar is the candy bar.  Seriously, there were M&M's, Skittles, Twizzlers, and Starburst sitting on a table.  IN CHURCH.  As soon as I looked up from that, I saw the band on stage, and they started playing. 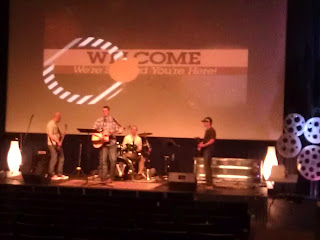 God Moment #1?  The song they started playing was "Cannons," a song I heard for the first time at Sanctuary.

I basically just hung out, Elizabeth introduced me to a bunch of people, and waited for the service to start.  I love that they start at 11:11.  As Elizabeth said, no one ever forgets it!  There was music from the band (modern worship songs instead of old hymns) and a baby dedication.  Then, Pastor Sean spoke.

God Moment #2?  His sermon was the introduction to their new series called "Represent," and it was all about what it means to be a disciple of Jesus Christ.  He talked about something that I've struggled with my entire life: feeling like I'm not as good of a Christian as some of my friends who have had a strong faith their entire lives.  I spent so much of my life feeling like no matter how hard I tried, I just wasn't doing it right.  But Sean used one of the most, if not THE most, quoted verses of the Bible to show me that I am good enough just as me.  "For God so loved the world that He gave his only Son, that whoever believes in Him shall not perish  but have eternal life." John 3:16  Whoever.  As long as you believe in the saving power of Jesus Christ, you are taken in as God's child.  It doesn't matter who you are, whether you've been a Christian for a day or all your life, where you come from, what you've done, the sins you've committed, the life you live, anything at all; if you believe, you will not perish.  God's timing is so good - I'm so grateful that God made my first week back to church coincide with a sermon that I needed to hear so badly.

After church, I waited for Elizabeth to help clean up.  Then, about a dozen of us went to this Mexican restaurant that I didn't even know existed, and it was DELICIOUS.  I asked to get a picture with Sean, just because.  And yes, that is what he wore to the service.  You know you go to a laidback church when the pastor wears a button-down and jeans.  I won't be dressing quite so nicely next week as I did today. 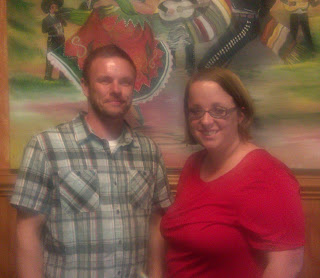 God Moment #3:  I spent a few minutes talking to Sean throughout the afternoon, and we are meeting sometime this week so I can tell him about my story.  He said they're always looking for people to share their testimonies, and God has given me such a passion for telling my story lately that I pretty much jumped at the chance.  So I may be speaking at this church in a few weeks. :)

Suffice it to say, I have found my church.  From the second I walked in the doors of that church today, I felt like I was home.  I haven't had a feeling like that since the night of my baptism.  I can't wait to go back.  I can't wait to be back with that crowd.  Any remaining wall I had still up about trusting a Christian community or trusting a church is gone.

With that, I have found yet another way in which God has redeemed and is redeeming the pain of my past.  I used to think that I wouldn't see or understand my redemption until I got to heaven.  Now, I realize that it's everywhere, every day, in every choice I make that brings me that much closer to Him.

There will never be adequate praises of gratitude.  All glory goes to God.  Only He could pull off something like this.