I barely have the words to write right now.  Partially because I just stopped crying about five minutes ago, and partially because I am in awe of how God can make miracles out of the most unlikely occurrences.

Holly and I just had may what be the most healing and helpful conversation we've ever had.  The details of what happened and why this conversation happened are not for public consumption because I'm just not comfortable putting it on the internet, and I know my sister well enough to know she wouldn't want that.

The important part is that I was able to voice some issues and resentment that I've been holding onto for years.  And she didn't get mad.  She didn't yell at me, she didn't call me names.  She listened, and understood, and I finally learned the truth about how much she respects me.

I feel like tonight was the first step in us having a real, close, sister-like relationship.  I love my sisters dearly.  I always have; there's nothing they could say or do to change the fact that, at the end of the day, I would die to protect either one of them.  Chelsea's got a lot of work to do by herself before she can ever be ready for real, loving relationships, but the only thing that was holding Holly and me back was selfish pride (on both our parts) and the inability to voice what was really on our hearts.  I think that this was the first step in getting past that.

I love my sister.   Not many people would get up at 3 in the morning and drive to a hospital to sit with me, but she did.  Multiple times.  We're both growing up and figuring ourselves out.  When she told me how much she respects me, I realized how wrong we've both been about each other for so long.  I had absolutely no clue she saw me the way that she does.  She just has a hard time showing it, I guess, which is pretty much the exact opposite problem than mine.

It's time to let go of all the hurt we've caused each other in the past.  My sister is beautiful, and funny, and talented, and smart, and has an ability to make friends with anyone that I've always been jealous of.  But at the end of the day, we are sisters, and no fight is going to change that.  I've always said that I love nothing more than seeing the people that I love happy, and she is absolutely included in that.

So I have to keep praying for her.  I have to, no matter how much she may irritate me at the same time.  I have to keep praying for her salvation, for her to come back to the God that loves her more than anyone in this world ever could.  I truly believe she (and Chelsea, too, for that matter) is never going to find the happiness she's been searching for for years until she finds Jesus.  I want her to experience this overwhelming sense of peace and love that I've been feeling in a whole new way over the past six months.  I remember when Taylor first told me that God could have put me on this spiritual journey in a family full of non-Christians specifically so I could bring them back to him.  I remember how much that shocked me, how amazed I was that God could think I was up to that task.  I have to keep praying I can be Jesus to her.  If I love her, I don't have any other choice.

And I do love her.  If I didn't, I wouldn't have just spent 30 minutes crying over our relationship.  I love her so much, my heart hurts right now.  I wish I could take back every mistake I ever made with her, but since I can't do that, the only thing I can do is try harder to be the woman God needs me to be in her life.  It's no secret that I don't give up on anything or anyone without a fight.  My family is absolutely included in that.  I see that now.  I'm never giving up on the chance of having the relationship I always wanted with her.

This day has been a long, long time coming.  This is exactly what I meant when I said that God makes beauty out of ashes. 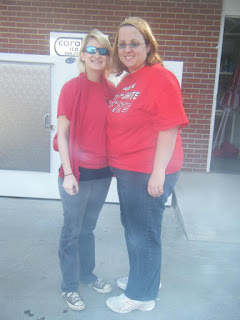