Holly and Michael actually picked me up at 8:30 instead of 9:00, that way Michael could help Holly get home through airport traffic that she hates and he could still get to work on time.  Hey, I'll always pick being early over risking being late, so I was totally fine with that.  I was so excited that getting up at 7:00 was no big deal at all.  I'm surprised I slept as much as I did the night before.

The airport was SO easy to navigate.  As soon as I walked in, there were the check in desks.  I wasn't checking a bag (why pay a $25 fee when I can fit all the necessities in a carry on?), so I got to use this nifty little "kiosk" that was for people who weren't checking  bags so they didn't have to wait in lines.  So that took no time at all, and I got my two boarding passes right there from the machine.  The security lines moved surprisingly fast, too, and I was through all of that by 10:00.  Incredible.  I headed for my gate and just chilled for a while with my iPod and some junk magazines I wasted money on.  Well, chock it up to being tired, or that I'm just an oblivious idiot, but I didn't realize that there was a flight leaving from my gate before my flight.  So I actually got in line to board the 11:00 flight to Atlanta, instead of the 12:15.  Smooth, Mal.  Smooth.  Luckily I realized it before I got all the way to the boarding check-in attendants.  So basically I sat back down for another hour and waited to board my flight, MY being the operative word.  The Atlanta flight was really nice.  I got an aisle seat, and I was sitting with this Mom and her little boy who was just adorable.  Lucky for me, all four of my flights were really, really short, so it was over before I knew it.

I had basically an hour and a half for my layover, and some lady named Donna was really nice and helped me find my way to my gate.  Delta lied to me; they said that the terminal I landed in and the terminal I left from were the same, and they weren't.  Donna told me they always lie about that, whether or not it's intentional.  I got forced to sign up for a FREE DELTA SKYMILES CARD!!! by some employee when all I wanted was directions, but whatever.  It's easy to click unsubscribe from those emails. :)

The Atlanta-Nashville flight wasn't as nice.  I was stuck in the middle seat between a businessman and a businesswoman.  I did get this cool shot out the window, though. 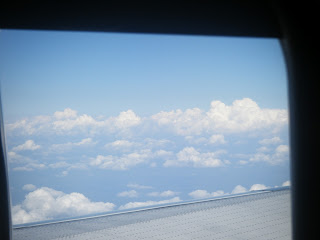 After dealing with a cranky old man who was supposed to be there to help people and instead seemed to find it annoying that I didn't know where I was going, I finally found my way outside.  I called Taylor at 3:23, the exact minute I told him my plane was landing, haha, but he didn't answer, so I left a message and waited.  Ten minutes later, I got a text from Bruno saying he and Phoebe were there to pick me up, so I told them where I was and they came a few minutes later. As it turns out, Taylor and Callie were both asleep back at the boys' house because they all got up at the crack of dawn for a TV appearance.  We went back to the house, and Bruno showed me around.  The coolest part to me was seeing their practice studio behind the house. 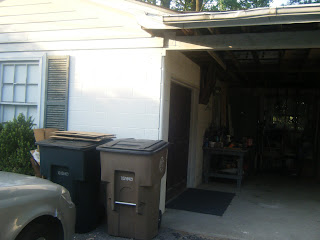 That's where all the magic happens! :)

Taylor woke up shortly after, and we hung out and talked for a bit.  I met their dad who was really cool and nice.  Taylor went to get in the shower, and Callie woke up, and once everyone was ready, we went to Bruno and Taylor's family's restaurant, The Dairy King.  I was happy to get to see it.  It's a cute little place with a definite "family" feel to it.  The food was really good, too, and they have amazing ice cream!  That was perfect because it was really hot outside.  I forgot to take a picture of the restaurant, sorry.

Then, we went back to the boys' house because they were hosting a livestream online listening party for "The Fourth Wall".  Three hours of playing the record, laughing, joking, answering questions, telling stories, and other general fun. 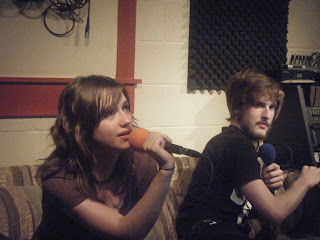 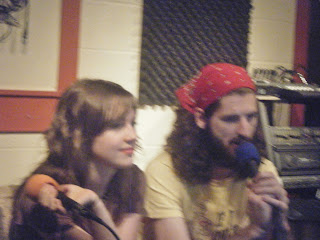 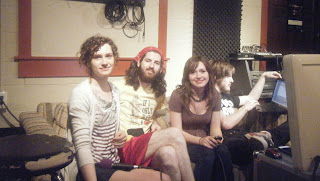 Those are just some of the pictures I took.  I also got to meet their good friends Erika Chambers and Gabe, both of whom I'd chatted with on Twitter over the past few months and heard a lot about from the band, so it was awesome to finally meet them.  Gabe literally left his house in the middle of listening to the podcast and went and bought everyone pizza because he heard Bruno talking about it.  That's a good friend, haha!  The livestream went from about 7 to 10, and we all hung out for a while.  Somewhere around 11, I think, Callie, Phoebe, and I went to their house where I basically proceeded to collapse in exhaustion.  Callie was sweet and gave me her bed for the week.

It was a really good and fun first day in Nashville.  Little did I know, it was only going to get exponentially better from there.