The big day.  It finally arrived!  I knew I'd been praying about this day for months, so I could only imagine how those four were feeling.  While I was downstairs eating breakfast, Callie said she was so jittery she could hardly eat, but she knew she had to.

On the way...I've never seen a street named Mallory until now! 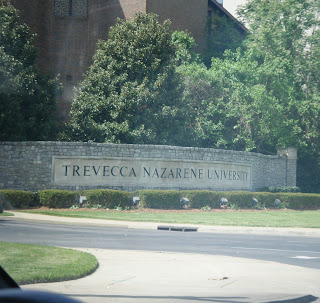 Trevecca Nazarene University, the venue.  They gave the band this HUGE conference room for free, allowing them to hold a free show for all of their friends.  So nice of them. 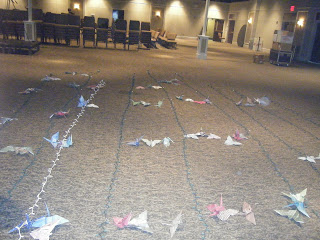 Part of Callie and Phoebe's vision for the stage included Christmas lights with origami cranes that Phoebe made tied to them strung from these giant tubes above the stage that I'm assuming held lighting wires and other electrical stuff (gotta love my technical terminology haha).  So Sydney and Janine, two girls from Trevecca's Concert Team who came to help, got the fun job of tying the cranes on.  I was glad I was physically able to do SOMETHING. 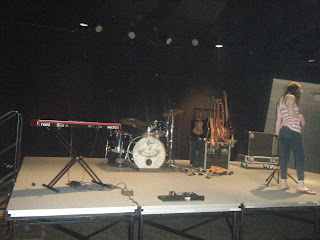 The stage as they were unloading the instruments and gear.  I quickly learned that it's best just to stay out of their way when they unload because they pretty much have it down to a science and I just end up getting in the way. 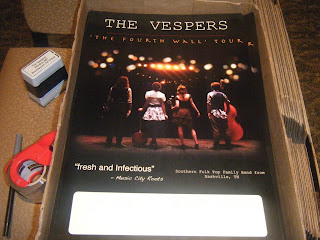 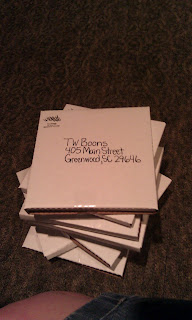 As Callie, Phoebe, and Erika, who came with some backdrops she uses in her photography, worked to decorate everything with the help of the guy on the machine that raised him up high enough to tie the lights up, Bruno worked with the sound guys to get all that stuff straightened out, and I have no idea what Taylor was doing.  Bruno me if I would label and package posters to send out to the venues they'll be hitting over the next couple of weeks.  It was easy, and made sense for me to do it seeing as I am the General of the Vesper Army, the Street Team/Fan Club. :)  This is basically what I'll be doing once we can get everything straightened out logistics wise.  It was easy, and believe it or not, I actually enjoy doing that kind of stuff.

Bruno and Taylor's dad brought more food from The Dairy King, so none of us had to leave to eat.  Before I knew it, the stage was done. 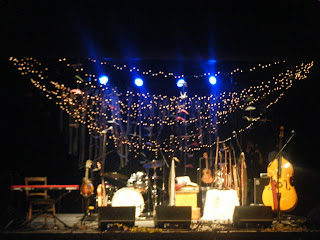 I finished the posters at 4:00, and I looked up and that is what I saw.  It was incredible, and totally set the tone for the night once all the lights were turned off. 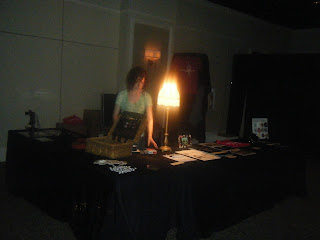 Phoebe started setting up the whole merch table, which seems to just be her job.  After this picture, Erika helped her string some extra white lights we had behind the sheer black tablecloths, which added even more glow. 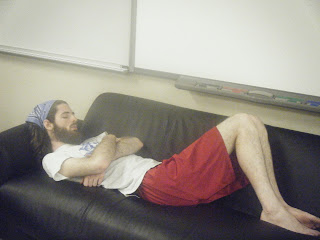 And Taylor took a nap.  Haha!  That boy can sleep anywhere. 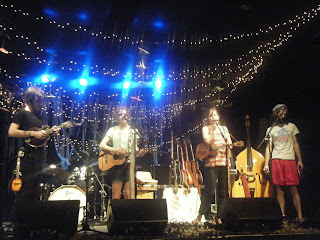 Just after 5:00, they started sound check.  I was eating and talking to Erika and one of the guys who was there to help do the livestream of the show, Wally, through most of it, but I managed to catch the end. 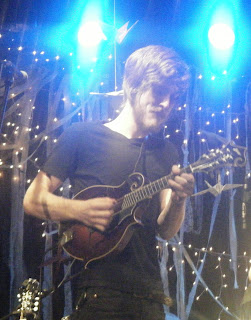 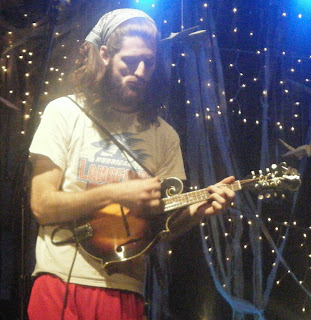 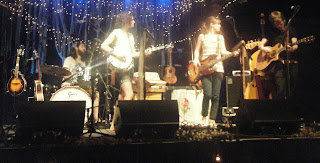 After sound check, I basically just hung out waiting for people to show up while the band got dressed and everything.  About 7:00, Bruno asked me to go over to the merch table because the girl who was going to work it for them was running a little bit late.  She showed up a few minutes later, but I stayed and helped her and her friend with it all till the show started just so I had something to do. 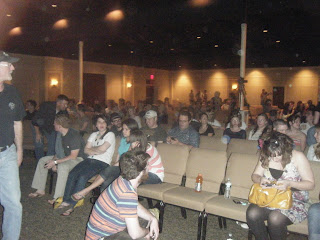 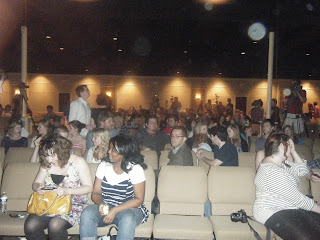 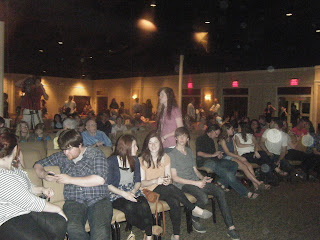 Three shots of different parts of the crowd.  Bruno said about 550 people showed up.  Trevecca only put out 500 seats.  Incredible!  I don't think they'd want me broadcasting exactly how much it was, but Bruno said they had their best night merch sales-wise that they've ever had.  I worked merch until the show started, because I was not going to miss this. :)

The band came out to the tune that wrestlers walk into a ring to, which I found hilarious.  It's so Bruno and Taylor (big wrestling fans) and such a joke for Callie and Phoebe (who can't stand wrestling).

They said they were only going to play about an hour set.  They ended up playing about an hour and 40 minutes.  The three encores they did probably had something to do with it. ;)  Here's just some of the shots I got.  I don't want to overwhelm you! 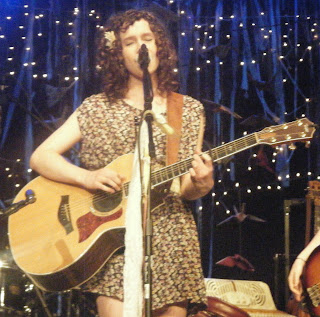 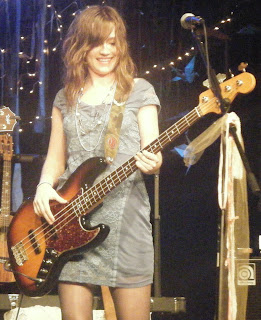 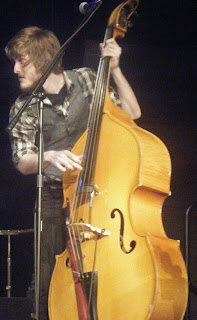 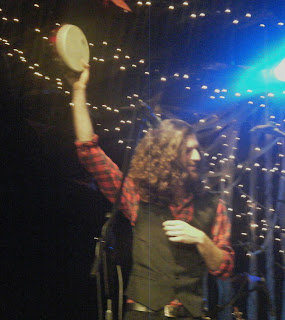 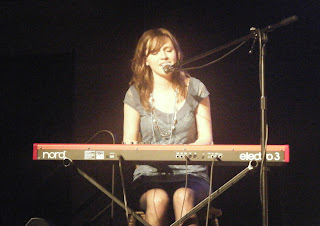 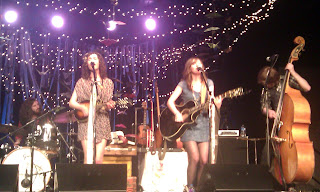 Afterwards, I went back to help with selling merch because those 550 people wanted it bad!  It was crazy for a bit, and that way the band was just able to go around and mingle and sign stuff.

I got to meet so many people that I've talked to on Twitter.  It was grand.  You know me, I love pictures, so here you go. :) 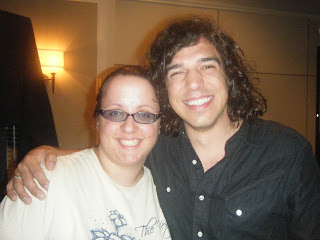 Robert Kelly, a musician that I only heard about because he was a guest on the band's podcast.  He's hilarious.  He wasn't even supposed to be there, but his flight to Dallas got canceled because of the tornadoes. (Prayers for Dallas!)  I'm so happy I got to meet him! 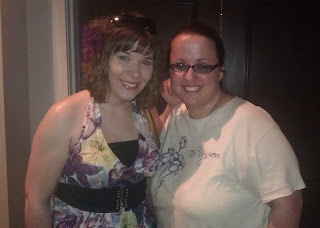 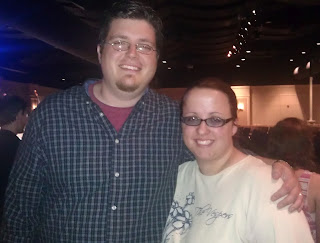 This is Clint, the band's booking manager.  I've talked to him for months now.  He started following me on Twitter because apparently the band told him about me during the Kickstarter campaign.  For some reason, whenever I look at this picture, he reminds me of Dr. Rankin, my orthodontist.  Haha, random! 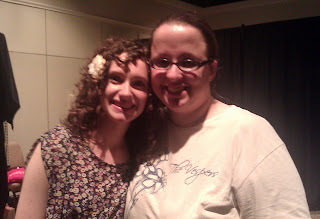 Phoebe.  Yeah, the pic is all shadowy, but I didn't want to make her wait and take another just because I was dumb and didn't know what the flash was set on.  It's still nice. 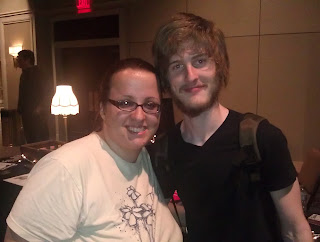 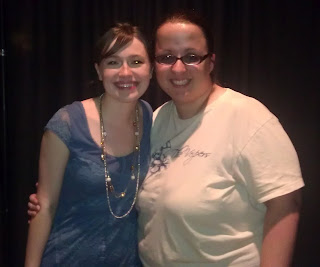 Yes, Callie and Phoebe's mom and sisters are just as pretty as they are.  Three cheers for good genes. 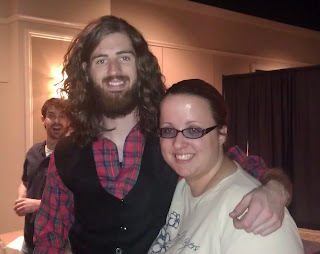 We got photo bombed.  I think it's a nice picture, but Aaron in the background is hilarious! 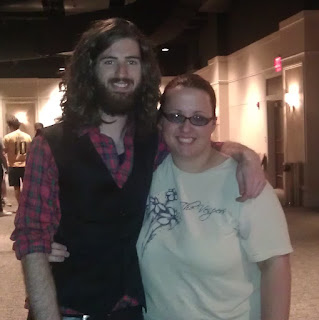 So I got a redo.  Taylor was sweet and appeased me.

After almost everybody left, they took down the decorations which took a surprisingly short amount of time. The band started loading back all the gear and stuff up, and Bruno let me sit in the van and count the money.

Then, a big group of us went to Waffle House.  I got to meet even more awesome people.  (I'm done with pictures for this post!  I didn't take a single picture at Waffle House.)  I met Danny, a guy who knew me from Twitter and whose Twitter handle I recognized once he told me haha.  And Bryan Simpson, Clint's brother and a relatively famous songwriter who helped write a song on The Fourth Wall; he'd heard about me from the band, too, which I thought was pretty cool.  I sat at a booth meant for four with Taylor, Gabe, Bryan, and Joel, someone totally new to me, with me and Bruno sitting at the end.  Soon after, this guy name Joe and his wife Anna came in and sat at the bar (they went to the show, too), I was kind of smashed up against Joe's bar stool haha.  Joe and I spent a lot of time laughing together.  The cooks kept overcooking waffles, and when they saw that we were giving Joe our unwanted bacon (not because there was something wrong with it, we just didn't want to eat it) and the first waffles they gave Taylor and Bryan that were too cooked, the cook proceeded to give Joe three more waffles for free.  So I told him his new nickname is Waffles.  He loves it.  (You'll see Joe's picture on the Thursday post.)

Then, we all left, and I once again proceeded to collapse from exhaustion on Callie's bed.  I thought her mattress was kind of hard at first on the first night, but man, I got some AMAZING sleep in that bed.

Oh, and the quote from the title?  That was a running joke all day Tuesday; the band finally "gave birth to their baby" now that the CD was finally released.  :)

It was an epic night.  I had a blast.  I felt so at ease with everyone, the people I knew well, the people I sort of knew from Twitter, the people I met that night.  Everyone just took me into their group.  I loved it, it's something I'm still not used to.  I didn't think anything could top Tuesday night...but boy, I was excited to see what Wednesday and Thursday had in store.