Ugh.  Saying goodbye this morning was so hard.  I'm not kidding - if I didn't have this free college education waiting for me in North Carolina that I basically have to finish, I would move to Nashville right now.

Callie drove me to the airport, as she was headed to Erika's house afterwards, and Phoebe stayed in bed.  The drive was really easy, there was no traffic and she knew the exact directions even though she said she wasn't 100% sure.  The airport was simple to navigate, and getting through security took basically no time.  The check-in kiosk said that my flight from Cincinnati to Raleigh was delayed fifteen minutes, but I figured that wasn't that big of a deal.  Sounds pretty sweet, right?

This is where it got complicated.

After I got through security, I went by Wendy's to get a biscuit, and this is when I started getting emails from Delta about my flights.  As I ate, and then made my way to my gate, I kept getting emails saying it was more, and more, and more delayed.  I kept texting and calling Sarah to keep her updated, and to make sure she could still pick me up because I knew she was heading home after she dropped me off.  She said it was fine, though.

By the time the email said my Cincinnati to Raleigh flight was two hours behind schedule, I went up to the desk at the gate and the lady found me a reroute through Atlanta.  And this is where God's sense of humor kicked in.  Literally the SECOND she finished getting me my new flight, I got an email saying the flights were back on schedule, haha!  Luckily, she managed to get me back on the same flights.

Once we made it through that little, uh, bump, everything was fine.  The flights were great.  I slept from Nashville to Cincinnati.  The flight attendants were nice.  Everything went basically on time, and I made it outside and called Sarah just a few minutes after the time I told her my flight would be landing. 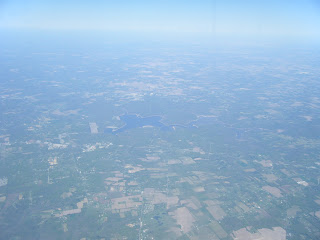 This is just a cool picture I took somewhere between Cincinnati and Raleigh.  Nothing makes me feel smaller than being thousands of feet in the air, looking down and being able to see miles and miles of land.

Sarah dropped me off a little before 5:00, and I called people to let them know I got back safe.  Then, I called my friend Elizabeth, and she agreed to take me to Walmart because the stock of food in my room was extremely low.  Other than that, all I really did was crop and edit pictures and upload them to Facebook.  I took over 100, so it was a lot to get through! :)

Coolest. Week. EVER.  This may very well beat out Liverpool for best experience of my life, mostly due to Thursday.  I am SO SO THANKFUL that I got to do all of that, that my mom was sweet enough to buy me the plane ticket, that God had His hand over the whole trip and everything worked out so perfectly.  I'm surprised I didn't cry, that's how badly I didn't want to leave.