I got up at 9:00 again because I wasn't sure what time we were leaving and I wanted to get a shower early enough that I left the girls time to shower, as well.  That was definitely the case, as we didn't leave the house until 12:30.  The band decided not to decorate the stage like they had for the CD release show, one because it was a lot of effort, and two, there were other bands playing at the show and they didn't want to get in their way.  So yeah, we left about 12:30 to get to the venue about 1:00. 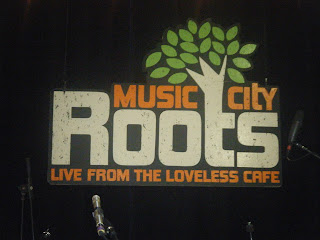 Music City Roots is the venue.  It was pretty cool, and it's a popular place in Nashville.  It's an old, renovated barn.  It says "Live from the Loveless Cafe" because they stream every show online and on the radio.  As soon as we got there, there was food for us to eat.  I've never eaten jalapenos in pasta before; it was really hot, but good enough for me to eat. 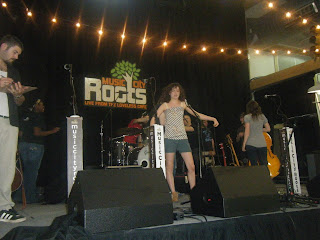 Sound check.  Because there was no real work other than unloading gear, I basically got to just sit around and listen to them and all of the other performers.  We had a bit of time to kill.  They were done with sound check by about 2:30 and the show didn't start until 7:00.  Immediately afterwards, I hung out in the green room for a bit. 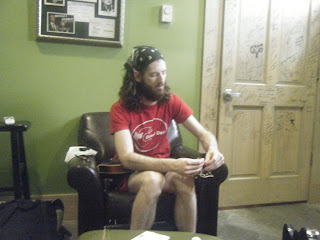 This is Taylor restringing a mandolin while in the green room.  (Yes, the green room is actually green, haha!) This is actually Bryan Simpson's mandolin; he had let them borrow it for the show on Tuesday because they needed two, and someone put the two mandolins in the wrong cases.  According to Taylor, they got the better end of the deal because Bryan's mandolin is way nicer.  (Go figure.) 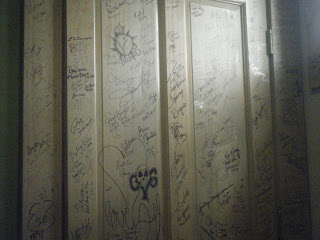 I just think this door is cool.  It's to the bathroom in the green room, and acts that have performed at MCR signed it.  I fell asleep in the green room from 3:00-4:00.  It felt good, too.  There was a comfortable chair in the chair, and with the door shut the green room misses almost all of the noise going on on the stage. 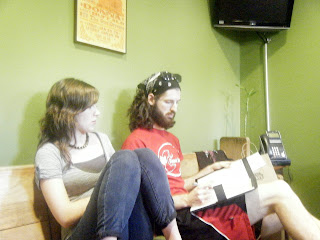 When I woke up, Callie and Taylor were in there coming up with the set list for the night.  I like seeing how they (all four of them) work together.  Then, I basically just hung out and listened to my iPod some more, wandered around and introduced myself to people, and ate once the food arrived.  It was grand - I got all of the band privileges (i.e. free dinner) with basically none of the work (aside from merch, there was NO work for me), and I got to listen to a bunch of really good musicians all day for free when it costs $10 to get in the door.  That's pretty darn close to heaven on earth for a music freak like me. 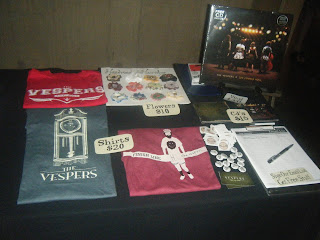 The merch table.  It was tiny because it was set up next to all of the other artists' merch.  I love selling merch, though.  It's a lot of fun to me, aside from the fact that the credit card swipe thing seems to hate me! Haha. :)

The best part about being back by the merch table all night was that I got to meet all of the other acts as they finished their sets.  (The Vespers were the last ones to go on.)  This is Gareth Dunlop.  He's from Belfast, Ireland, and I pretty much adore his accent.  He was super nice, too.  He gave me his two EPs for free!  I couldn't see him when he was on stage because there was a crowd blocking my vision, but I fell in love with his singing voice!  Check him out. 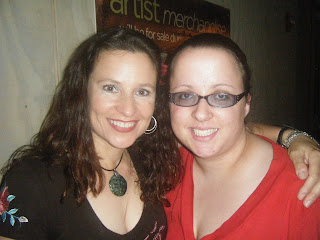 This is Audrey Auld.  She's from Australia, so she has an awesome accent, too.  She lives in Nashville now, though.  She was really nice and gave me codes to download her music for free, too.  Apparently that's just what people do in Nashville, according to the band. 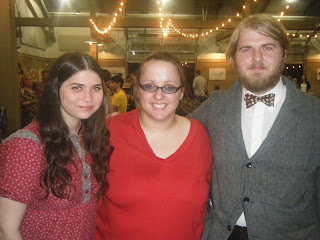 Pearl and Chris, The Driftwood Singers.  They were very friendly. :)  There was one other guy there that I didn't get a picture with.

A picture of the band during their set.  It's sort of a miracle that I got a picture of all four of them without anyone blocking each other. 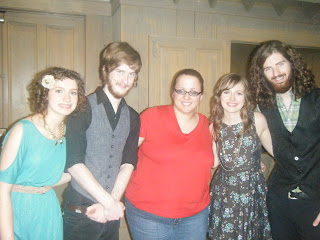 I'm fairly sure I was starting to annoy them with my need for pictures, but I just wanted one group shot.  I like this one.  They're all really smiling, which is also a rare occurrence. 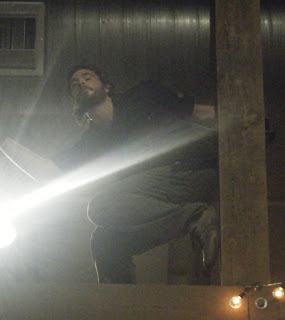 This is just funny to me.  This is a guy named Conrad who works with Music City Roots.  He was up on the rafters doing all sorts of funny "modeling" poses, so I told him I had to get a picture of it.

After everything was packed up, a whole group of us went to this place called The Brewhouse.  They were having an open jam session, and this is the band that was up there when we arrived.  I got some really good potato skins, but I was relieved when Callie and Phoebe decided they didn't want to stay a long time because the music was so loud my eardrums were hurting.

The day wasn't nearly as much fun as Tuesday, but it was still pretty awesome.  My feet, ears, and head hurt pretty bad when we got back to the house, so I was relieved to get some sleep.