I got Christmas today.

It was out of sheer necessity, mind you.  My mom does not usually give out Christmas presents this far in advance unless it was like, tickets to an event that just so happened to take place before Christmas Day.

But anyway.  What I got was something that I completely did NOT expect to get it.  Because us "kids" are older now, there's usually no real surprise to Christmas presents anymore.  What we normally just get is cash, unless there's a specific gift that we request.  It's much simpler this way.

Back in the beginning of July, I told my mom that I wanted a new cell phone for Christmas.  The only real issue with mine (at the time) was that the screen was all scratched up.  Plus, to be honest, I was just tired of it.  My mom told me I was crazy to want a new one when this one worked fine, but I told her it wasn't like it was going to be expensive considering I'd had it for two years so there was a $150 upgrade credit given by Sprint.  She just said "We'll see" which is Mom-code for "Ehhh, probably not going to happen."

Over the course of the next few months, things started going wrong with my phone. (I promise I didn't sabotage it!)  It wouldn't hold a charge for very long.  If I tried to make a phone call without it plugged into the charger, which was basically the only way I COULD make a phone call seeing as how reception indoors sucks at Campbell, it would completely turn off randomly.  Just all sorts of random, not-good-for-a-phone-to-do things.  So I kept reminding my mom that I'd suck it up till December 25th, but I really wanted, and now sort of needed, a new cell phone for Christmas.

Well my mom walked into my room about 2:00 this afternoon with a bag and said, "Are you ready for Christmas?"  She pulled out EXACTLY what I asked for...except way better. 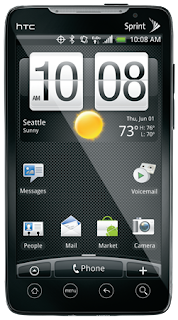 A smartphone. To be specific, an HTC Evo 4G.﻿
See, when my mom first got us all our own cell phones, we had internet on our phones.  But it wasn't unlimited, and the very first month, Chelsea blew. up. her phone and made my mom's phone bill skyrocket for going so far above the limit.  So that was the end of that.  And through all the years since then, she said she was never going to get internet on her phone plan just so that could never happen again.

Heh.  Now Chelsea's getting married.  That means that her mommy isn't going to be paying her bills anymore.  Her phone has crapped out completely, so she desperately needed a new phone, too.  But because she will be moving onto Shane's Verizon plan in just a few months, Mom didn't want to buy her a new phone and have to commit to a contract which she would then have to break.  And apparently, Holly will soon be taking over her own phone bill, as well.

My mom found a Christmas special on Sprint's website, and with the previously mentioned $150 upgrade that I had, and that she had, as well, all she had to pay for two new Sprint smartphones for her and me was the $36 activation fee and the increase in cost for the new data plan.  Not too shabby considering these phones are $300-$400 each, eh?

I love this thing.  I haven't stopped playing with it all day.  I am so stoked that she thought of this. :D

Merry Christmas to me!