Today was nice.  Thankfully, it started off well because Mom didn't take a sweet forever to actually get up this morning.  Granted, she got up at the time she told me yesterday she wanted to leave, but that's actually good for her.  Ha!

The appointment was fine.  I only have to go see them once a year now, unless I have a new problem, because this migraine medicine is working so well.  Like I'm having them once a week, IF that, twice in a week if it's really bad.  It's pretty awesome.

Then, we went and picked up Holly.  We went to the mall to kill some time, and to pick up some shirts Mom bought for Shane as his Christmas present.  The boy has like NO nice clothes.  I bought myself a really really cute Liz Claiborne purse and a (different brand) matching wallet on sale.  The perks of going shopping the week after Christmas. 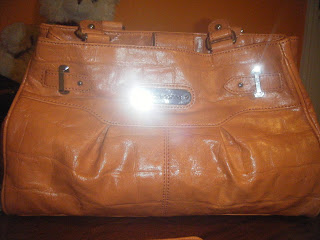 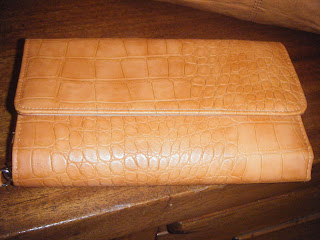 I was surprised they had orange!  It's usually pretty hard to find in accessories.  Plus Mom surprised me with a super nice phone case. 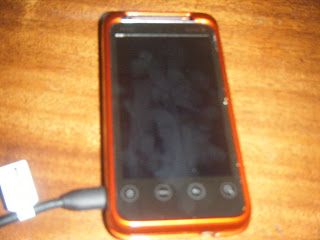 Not hard to figure out what my favorite color is, is it? ;)

Then we went to this Mexican restaurant that Holly had a coupon for.  It was pretty good. 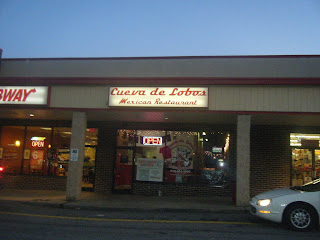 We stopped by a drugstore for cough drops, and then we headed over to Reynolds Coliseum for the game.  You have to get there early to get good seats.  I'd never been in Reynolds before tonight because all the basketball games have been held in the much bigger RBC Center since 1999.  These "retro games," as they call them, are a new thing, and way cheaper than regular tickets!  I was excited to get to see Reynolds, since my mom and dad spent so much time in there for games and concerts and stuff.  Here's a pic I stole off Google of the outside of Reynolds - by the time we got there, it was too dark for me to get a good picture of it. 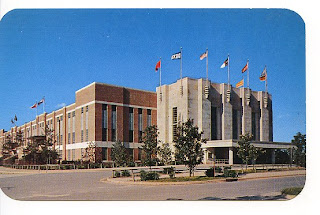 Mom and Holly were talking ALL sorts of smack before the game, until I reminded them of the fact that Campbell has several statistics that beat those of Duke, Carolina, AND State.  That, and my "little old non-important school" in its "little old non-important conference" has a player that has gained national attention and may very well be the first Campbell basketball player drafted by the NBA.  Our basketball program is FINALLY getting really good.

It was really odd being at the game tonight and not cheering for the Wolfpack or singing during their fight song.  Haha!  First time I've ever been to a sporting event and been on the "away" team.  It was a very tight game.  At halftime, it was tied at 41.  And that's only because we got way too many fouls that gave the Pack way too many free throws.  Even Mom agreed Campbell outplayed State in the first half.  By the second half, though, the Pack remembered they had to also play defense and they ended up beating the Camels 87-81.  It was crazy close, though.  According to an article on gopack.com, there were 15 ties and 12 lead changes.  That's a lot for 40 minutes of play!

Anyway, it was still fun.  Here are some pics I took of Campbell warming up, the starting line up being introduced, and the last one is of the tip-off.  They suck because you aren't allowed to use flash at all in the Coliseum, even before the game started. 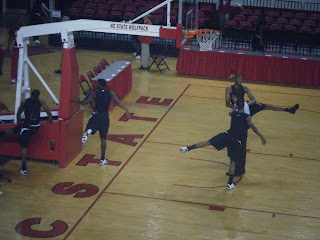 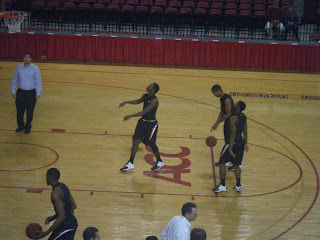 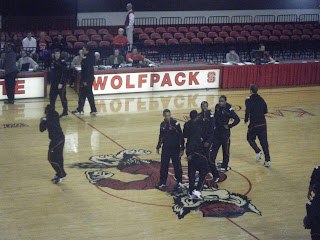 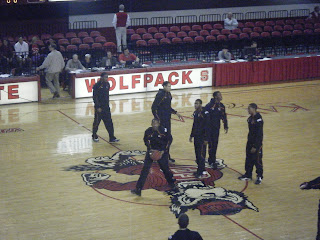 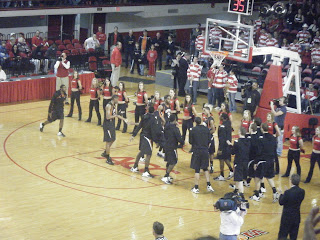 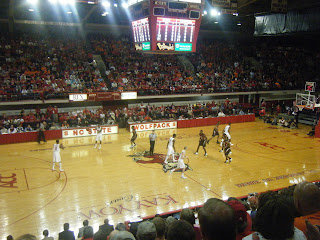 Quote of the day:
Me: "I don't know what sound a camel makes."
Mom: "I don't think they have a sound.  I think they just spit."

Just another reason to love my school.