The caption says it all. 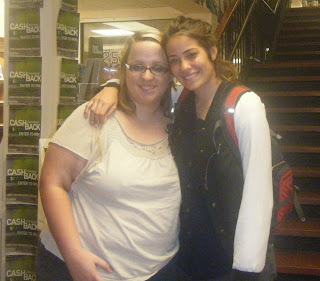 Good friends are like stars. You don’t always see them, but you know they are always there.

That picture was taken tonight in the bookstore as I went with Ryann to return her books after our French final.  Said final was fine, pretty much exactly what I expected.  Well, it would've been exactly what I expected had I not forgotten that Dr. Steegar said he was going to surprise us with a topic to see if we could talk spontaneously.  But hey, I did fine, and I've never gotten anything below an A with Dr. Steegar, so whatever.

But the best news of the day isn't that MY FINALS ARE DONE!

It's not I'M OFFICIALLY A JUNIOR!

It's RYANN IS COMING BACK TO CAMPBELL NEXT SEMESTER!!!!!

I am beyond relieved.  She says she may be leaving at the end of next semester, but at least this will give me time to get used to the idea if that's the case.  I was SO unprepared to say goodbye to her today.  I'm aware that I've mentioned about a BILLION times what this girl means to me, but I just want to say this:  In basically 9 months time, we went from barely speaking to each other to being like sisters.  And that blows. my. mind.  She said that the whole soccer disaster finally got resolved today, and while it's still completely bogus that she is being punished, it's better than her record being tarnished by being kicked off the team.  So yeah.  I didn't have to cry today.  That was nice.

I find it sweet but also very amusing that she and Elizabeth are still SO mad about the whole Nick thing, despite the fact that I've told them both I'm completely fine and they shouldn't worry about it.  Apparently I forgot to mention to Ryann that I was giving Nick another chance at being friends, and when I mentioned that to her as we were leaving the bookstore, she honest to God looked like she wanted to hit ME.  Ha!  They think I'm crazy, but it's just because they're so protective.  It's a good thing Nick already left campus because I'm pretty sure if he hadn't, she'd find him and "lay down the law about this second chance thing"...at least, that's what she threatened.  As did Elizabeth.  I'm still trying to get used to having girlfriends, friends that are this protective.  I mean, Matt's protective in a way, but he's kind of all bark and no bite.  I'm fairly certain these two would actually kick someone's ass if necessary.

So anyway, this picture is gonna be Ryann's Christmas present.  I texted her and let her know I emailed it to her like she asked me to and her reply a little while later was "OMG I LOVE THIS PICTURE!!!!!" And it's not like it's expensive to get two copies of a picture made at Walgreens. :)  And frames are easy to find.

I've basically done nothing else today except eat and pack.  It felt really good to sleep in today.  Even though my earliest exams were at noon, I've gotten up early every day (like 7:30 or earlier) for one reason or another.  And I'm gonna be getting up relatively early tomorrow so I can finish packing and eat lunch before Mommom gets here and I have to check out at noon.

I'm not going to talk about the mixed emotions I have about going home for a month, because that wouldn't be happy.  Instead, I'm going to say this:

This was the perfect ending to this amazing semester.  Walking back to my dorm in the pouring rain and all.  It was perfect.  I love my life more and more every day.