I'd love to tell you that my Christmas break was full of exciting plans from the very beginning.  I really would.

My official first day of vacation was mostly spent sleeping.

And it felt fantastic.

No responsibilities, no work, no babysitting. Nada.

Just catching up on the one thing that college students so frequently lack.  (Well, besides air conditioning if you live in Burkot.)

I was awake for a bit this afternoon, and my allergies and chest were much better.  I avoided my mom's room, so I thought I'd be fine.

Heh.  Nope.  Apparently the living room makes me sick, too.  Mom's decided she needs to paint the fireplace wall (it's a different color than the rest of the walls) a new color, and she has to do it before she can put these new rugs she bought down and put up the Christmas tree.  So I was hanging out in there while she and Shane were getting the TV off the wall, and apparently that moved around too much dust.  This is going to be a long, sniffly month.  Oh well, she's trying.

Bruno sent me the new Vespers album last night, or at least what they have of it at its current stage of mixing.  It's absolutely incredible.  I can't wait to have the finished product, the physical copy in my hands, which will hopefully be in a few weeks.  Before I say what I'm about to say, I want to make something perfectly clear: I don't help them out for the attention, or for the free stuff.  I would still do everything I've done to help them already and whatever I do in the future if they never gave me anything but their words of thanks and appreciation.  I am honored to be a part of their "dream team," but I am also honored and grateful for the gifts, like being one of the few to hear these early mixes.  Sometimes, I even feel like I don't deserve things like this, but I realized that giving me a free t-shirt or sending me their early mixes is their way of saying thank you.  I just wanted to make sure you guys understand my heart and my reasons for doing what I do for them.

After I listened to all the songs, I DMed their tour manager Clint on Twitter.  He followed me a few weeks ago and told me thanks for helping with the Kickstarter campaign, and I was truly a little surprised that he knew about me.  He tweeted last night after he heard it about how good it was, and I replied "If this were Facebook, I'd totally like that." (haha), and he said "It's a great album. I can't wait for you to hear it."  I wasn't sure if he meant me specifically or like the fans as a whole.  But anyway, I DMed him to avoid any other fans possibly seeing it and getting jealous, just to tell him Bruno sent it and that I loved every song on it.  He sent me some incredibly kind messages back.  Even their tour manager appreciates me, yet I still sometimes feel like I haven't done that much for them to appreciate.. :)  I love helping people so much.  It makes me feel so fulfilled. (read from the bottom up) 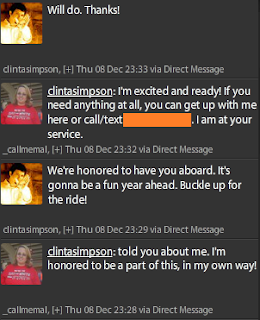 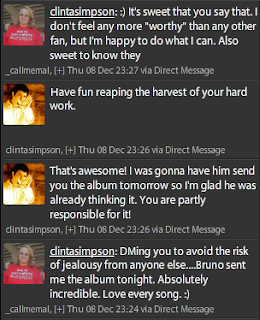 Between that, the music, and getting some extra, really good sleep, I'd definitely say this vacation is off to a good start. :)