A Complete Turn Around

I was in excruciating pain from the second I woke up, I'm thinking the worst I've had since I started this medication plan.  I say "I think" because I can't remember what my pain is like from day-to-day, but I had tears in my eyes or running down my cheeks pretty much all morning because it was so intense.

Luckily, by the time I went to the infirmary for a check-up on my foot, the tears had stopped.  But then I had to tell the very nice doctor bad news: yes, the pain I originally came in for is getting better and the giant blister on my ankle is healing, but I have new pain and a new blister.  Sigh, it just never ends.

Then I got to Phonetics and found I got an 83 on that test I was so freaked out about.  Granted, I was happy because it was a B and higher than I expected, but I was frustrated because I made a LOT of stupid mistakes because I was so tired and an 83 is far from the kind of grade I'm used to getting.

My afternoon tutoring session was canceled for today, which meant I got to go straight back to my dorm after Public Policy.  Then I had to deal with accepting the fact that my neurologist feels she basically has no other options to help me other than this IV therapy, and I had to deal with a very difficult conversation with my mother in which we realized we have to figure out how to get me help for more than 100 days of constant pain without costing her good standing with her administration.  Parents should not have to choose between their job not making them depressed and their child's health.  They just shouldn't.  I'm not sure what's going to happen yet.

This is where things finally started getting good.  Great, actually.  Ryann invited me over to her apartment for a movie night with her roommates, Taylor and Cissy, their friends, a girl also named Taylor (but she often goes by her last name with this crew), Ian, and Spencer, who was down visiting from Virginia.  I met Spencer back in early December when he visited before, and we've chatted occasionally and were excited to see each other.  As soon as I walked in, he got up and gave me a hug.  Then, I sat down at the kitchen table to talk to Ryann, and he came up and said, "Happy Valentine's Day," and handed me this. 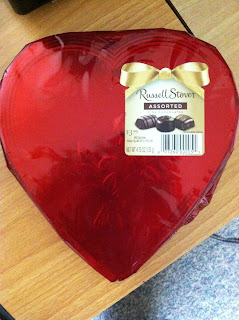 A box of chocolates. Melt. my. heart!  I meant what I said yesterday about honestly not caring that I didn't have a Valentine this year, but to have this guy that I don't know all that well be sweet enough to buy me a Valentine's Day present just made my day.  Spencer is such a sweetheart, and after all the stuff that went down tonight (which, to respect Ryann, will not be blog material because it is not my story to tell) I feel like I really consider him a friend.  This kind gesture and the talk we had put a huge smile on my face after a long and difficult day.

We all also watched this bizarre movie called Looper, and then Ian drove me back because he insisted it was too cold for me to walk up the street.  Also a very nice guy.  :)

Anytime I go over to Ryann's apartment and hang out with her and her friends, it feels like the highlight of my week.  But tonight could not have had better timing.  Good friends + good talks + fun + surprises = happy Mal.  Thus why it's past 1 in the morning and I'm sitting here writing this blog post.  It was a late get together, haha.

And I get to see them tomorrow, too.  The women's soccer team is playing UNC Pembroke at 1:00 and then playing the alumni at 3:00.  Ryann asked me to come, so of course I couldn't say no.