That I would wake up to pouring snow on the one day the alumni game is scheduled.

THAT NC GOT SNOW PERIOD.

That NC got snow just days after I told my friend in Oklahoma that NC never gets snow.

That it would take hours for the snow to stick, and then that it would start melting like two hours later.

That I decided to try sitting in the pouring snow to watch the current team play. 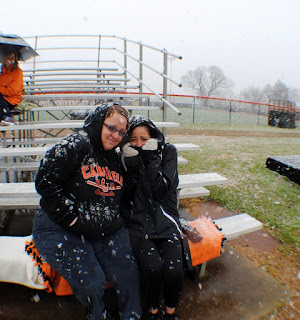 That I found a best friend who is as big of a goofball as I am.  (see her pose?)

That I could care so much about someone I barely know.

That kind, chivalrous guys still exist, and I got to hang out with two of them this weekend.

That I could leave my dorm feeling fine, walk down the street and in the door of Ryann's apartment, and promptly pass out due to what I can only think was a mix of a blood sugar crash and dehydration.

That I could drink a Gatorade and a ton of water and take a two hour nap and, aside from the bruise forming on my head from passing out face first, feel normal again.

What doesn't baffle me, though?  That I could pick talking to people and giving advice over sleeping some more, even though I probably have an early morning tomorrow.  Some things never change.