So.  There's this blog.  It's called The Bearded Idealist.  It's written by this guy named Stephen.  He's very funny, and just the kind of blog I like to read, though I just added his blog to my reader tonight after reading all of his posts so far this year and crying from laughter.

Anyway.  Every month, he does a feature called "Beard of the Month", and back in July, Taylor was the featured beard.  That's how I first came to know about Stephen and his blog.  Well, at the end of the year, Stephen did a "Beard of the Year" contest where all of the monthly features competed against each other to see who could get the title.  It sounds silly, I know, but this is the cool part - it wasn't just a "let's see who can get the most votes" type of contest.  Instead, the winner was decided by which nominee could raise the most money for an organization called Live58 that works to stop sex trafficking (seriously, check them out, what they do is amazing).

At the time the contest started, I had five dollars and change in my bank account.  The old me would've held on to that little bit of money.  But when I saw what the donations were for, I basically thought, how could I say no to that?  Plus I got to help Taylor (though he lost, boo).  So I went and donated everything that was left in my account.  I didn't have any better use for it.  Afterwards, I sent Taylor a tweet telling him what I'd done, just to let him know I'd "voted" for him.  Somehow, Stephen saw it (and I'm still not sure how he did since he doesn't follow me and I didn't tag him in the tweet) and responded. 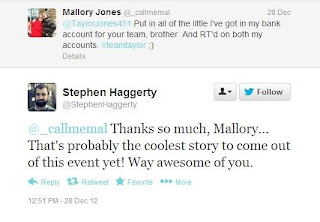 I basically just responded that I was happy to do it.  After that, the whole thing sort of slipped from my mind.  I got so caught up in the New Year and getting back to school that I just never thought about it.  I figured if Taylor had won, I would've heard about it, so you know, whatever.

Fast forward to tonight, and I randomly thought about that contest.  I was curious to see who had actually won, so I went to his blog and looked up the "Beard of the Year Winner" post.  I read the post about the guy who won, thinking basically, "Hmm, okay," not really feeling anything significant...until I got to the part where Stephen talked about his reaction to people participating in the contest.

See that last bullet point there?  Yeah, that woman would be me.  And I'm not telling you all about this because I want a bunch of compliments.  I'm telling you this because when I saw that and remembered I was the person he was talking about, my eyes immediately welled up with tears.  I wasn't even quite sure at the time why it was hitting me so hard, but it was.  Then, I realized that I had never made the connection between what I had done and the story of the widow's offering.  I didn't think about it when I made the donation, I didn't think about it when I told Taylor I'd donated, it never once occurred to me even though I know the story well until I read this on Stephen's blog.

I don't remember the last time I felt so humbled.  I still feel so "new" at being a Christian that to know someone looked at what I saw as an insignificant action and saw something Biblical moved me greatly.  I left a comment on the post, and told Stephen via Twitter to go read it.  He responded. 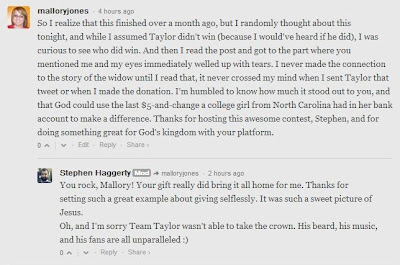 It was such a sweet picture of Jesus.  Someone looked at something I did and saw Jesus.  That blew my mind.  I truly didn't know what to say or think after that.  Even now, sitting here writing this post and trying to explain what's going on in my mind and heart, all I can think is that God really does use everything.  I remember at the time I almost felt silly only donating $5, despite that being all I had, but doing it anyway because I wanted to help.  But I didn't think about it after that.

I just remembered something.  Taylor responded to my tweet about having donated with this:

Which is true.  It may have "only" been five dollars and change, but Live58 will still use it for something, and it'll be something good, something to help save people.  And I'm sure I knew that at the time, that that gift would be a blessing to the victim that gets help.  What I never expected was that Stephen would see this as a blessing to him.  And I never imagined that I would be this blessed by it, especially not now, six weeks after everything happened.

But then again, I think that's kind of the whole point of the story of the widow and her offering.

Luke 21:1-4 - As he looked up, Jesus saw the rich putting their gifts into the temple treasury.  He also saw a poor widow put in two very small copper coins.  "I tell you the truth," he said, "this poor widow has put in more than all the others.  All these people gave their gifts out of their wealth; but she out of her poverty put in all she had to live on."

I bet that widow felt a little bit awkward, too, going up and giving two small coins next to larger, more impressive, extravagant gifts.  But she did it. anyway.  She gave everything she had, and Jesus saw that as more lovely, more beautiful, than everything else.

Sometimes, what feels insignificant to us makes a big difference to someone else.  It won't always make sense, but we need to do what we feel led to, anyway.  You may or may not get a thank you or recognition, but one thing is for sure: God will reward your faithfulness.

For me, that reward came with the tears I cried as I felt Him whisper to me "I see you."  That reward came with the knowledge that even when I don't realize it's happening, I'm doing exactly what I've always wanted to do - I'm making a difference to people.  I'm helping make someone's life better.  And that keeps me pushing forward.

Don't stop trying.  Don't stop spreading His love.  Don't stop giving everything you can to do His good in the world.  You may not see the point or the justification behind it this side of heaven, but He does, and that alone makes it so worth it.