One of the things I love most about my friendship with The Vespers is the number of friends that I have made through them.  Both through my trip to Nashville and through Twitter, I have met (both literally and the online kind of figuratively) some incredible people who have encouraged me, taught me lessons I didn't know I needed, made me laugh when I didn't think I could, and just truly become friends of mine.  And of course, there are so many people I've met through the blog world about whom I could say the same things.  The power of the Internet people.  It's not as impersonal as it sounds.

One of the people I got connected with through The Vespers is a guy named Travis.  I don't remember when or why we started talking via Twitter, and I know I didn't meet him in Nashville because he doesn't live there.  But anyway, over the past couple of days, I've been helping him with his College Algebra, since it's one of the courses I tutor here (and is a very interesting thing to do via social media), and he has been so appreciative and sweet about the help.  I honestly think it's been as much of a blessing to me as it has been to him.

While I was helping him, I posted this tweet, and it sums up my feelings in one sentence. 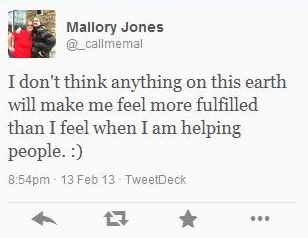 And while we were talking, I mentioned that I didn't know what to blog about tonight, and he wrote back, "Helping others in any given situation at any given time. Be of service and be happy to do it. Cuz that's how you've been with me."  Seeing that made me think of when my friend Lauren told me that I'm one of the most selfless people she knows.

I will be the first person to tell you - I love people.  I always have.  It's next to impossible for me to see someone who needs something that I can give them or do for them and turn away without having done it.  It honestly kind of baffles me that this is such a thing of wonder to people who know me, that me helping the people around me out is even worth commenting on.

Take Travis for example.  Have I met the kid?  Nope.  Do I know him well?  Nope.  But what I saw on Twitter a few days ago was a guy working really hard on something he just didn't understand, a guy who's got his own set of issues outside of school that have been taking his attention (and rightfully so), and he was dealing with a course that I'm being paid to tutor at my university.  It was midnight - what was more important to me, sleep or helping this guy out?

Um duh.  I will always pick helping people over sleep.  And anyone who knows me knows how much I love to sleep.

Here's the thing.  I'm not some freak of nature for making helping those around me a priority.  Anyone can do this.  It doesn't have to be some grandiose or expensive gesture.  I mean, tutoring Travis doesn't cost me a dime, and I manage to do it while texting friends, looking at Facebook and Twitter, and listening to music.  The first step is to just PAY ATTENTION.  Don't be so caught up in your own world that you get tunnel vision and miss someone who needs a friend that could be right in front of your face.  But also, pay attention to when God might be telling you to do something.  That same friend Lauren listened to a calling from the Lord that's leading her to Jamaica this summer for a mission trip.  So yeah, pay attention.

Second of all, don't just do what's easy.  The time I've spent helping Travis could have been spent many ways getting ahead in my classes.  But really, Jesus faced the biggest cost of all, his life, and he paid it because he loved us that much.  As Christians, sometimes showing the love of Christ to people means sacrificing in some area of our own lives.  The Bible pretty much spells it out for us.

John 15:13 "Greater love has no one than this, that he lay down his life for his friends."

So do something for a stranger, too.  For example, since I'm seeing The Vespers the week of Taylor and Bruno's birthdays, I decided that with this job, I could afford to buy them birthday presents (and give Caitie a super early birthday present, and Callie and Phoebe wedding presents).  Taylor was easy - I knew exactly what I was getting him as soon as I decided.  Bruno, however, had me stumped.  Last night, Caitie asked him what I should do, and he said "Do something for someone who needs it more than I do."  And when I jokingly teased him that he was no fun, he replied, "Nah, I just don't like stuff, rather be selfless."  With that, I immediately knew what I'm going to do.  It was such a lesson for me, too, simple decisions like telling someone to give your birthday present to someone in need are selflessness in action.

I don't mean to sound like I'm preaching.  I certainly fail at this sometimes.  But I do my best, and since I've been told I'm such a great example, I figured I'd share my thoughts on the matter.

In the end, though, I think Travis's words summed it up better than I did.  Help anyone in any given situation at any given time.  Be of service and be happy to do it.  The reason why helping people makes me so incredibly fulfilled is because a) I get to put a smile on their face, but mostly b) I know in my heart that I'm showing them the love of Christ.

We were not created to make this life about ourselves.  We were made to know God and to lead others to know Him.  I'd say this is a good way to work on the latter part.  I've learned than most of the time, your actions will show the love of Christ so much more deeply than your words ever could.