Mostly because of my feet. I've been hammer-toed since I was born. And it usually doesn't bother me, but I think they're getting worse. Every day it's hurting more and more to walk. But my mom thinks it's just my feet getting used to all the walking I'm doing here at school, and maybe she's right, but it worries me. She said if they're still bugging me in a couple weeks, we'll talk about it again. So we'll see. I really do hope she's right. I don't want two more surgeries. Plus, my orthopedic surgeon at Shriner's who did my back surgery won't do them because I turn 18, so I have no idea how we'd pay for them. The last thing we need is more medical bills. I guess all I can do is pray, right? 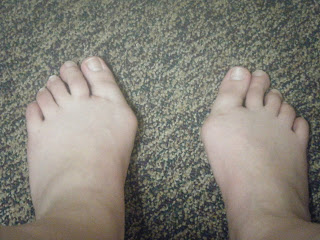 That's what they look like, and almost three years ago, when we first asked about possibly operating them, docs at Shriner's said they were really bad, but they couldn't operate on them then because since I was still growing, the bones would probably just slip right back.  But of course, now I'm done growing, and they can't operate on them now because I'm so close to "aging out."  *sigh*