He was brutally handsome, and she was terminally pretty.

My sleep schedule could not have been more off during this finals week.  But today I woke up at 6:30 (after only about 4 hours of sleep) knowing that this was the last day I'd be waking up this early for quite some time, and I didn't really mind it at all.  I didn't want this semester to end.

I got ready and headed to my 8 am Presidency final in the rain.  Boo.  But I made a stop over by Austin's room to pray one last time over him before he left for break.  I don't really want to talk about why I felt like I needed to pray over him because it's not my place to talk about his life, but I will say that I had that feeling that I needed to go see him and pray since I woke up, and I'm really glad I did.

After the final, I took a nap until 11:00.  It turns out, I was wrong about the bookstore hours, or they changed them this year, so I couldn't go return my books.  It's no big deal, I'll just return them when I buy next semester's books.  When I woke up, I finished last minute stuff, and my RA showed up right at 11:30 to do the checkout.  Since I didn't know exactly when my ride would get there, and it was freezing and gray out, she let me stay in my room once she knew I'd done everything necessary, and just told me to text her when I actually left.

Mom ended up not coming to the basketball game this afternoon, so Holly had to come pick me up.  She arrived a few minutes before noon.  We packed my stuff in her car (thankfully after this many years, I learned I really don't need to bring as much stuff home as I think I do), grabbed lunch from Bojangles, and headed to Raleigh.

Our first stop was a brand new experience for me...a Wolfpack basketball game!!!!  I was pretty much in heaven.  I'd never even been inside the arena before, and it was so cool.  This was the view from our seats, and I loved it. 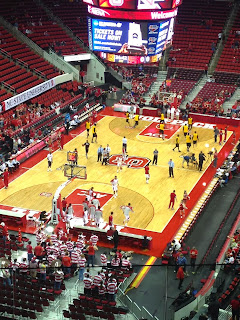 The game was great.  We won.  The experience was cool, but not as great as it could have been because the place was far from packed since we weren't playing a conference or any big name.  I didn't really care, though.  I had a blast.  And it was a lot of fun to be there with Holly. 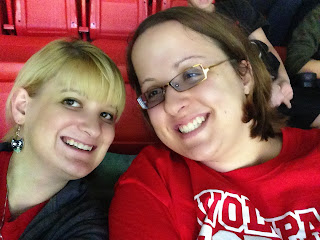 Ignore the fact that I'm not even looking at the camera, ha!  It was a little jarring to realize how much faster basketball games go compared to football games.  I guess it's something to do with the 20 minutes less playing time, and the fact that they don't have to put a whole new team on the field every time the ball changes possession. ;)  We left the arena just after 4:00 (the game started at 2:00).  On the way out, I took a picture of this.  Sort of like how I take a picture of the entrance to Carter-Finley Stadium every time we go to a football game.  Oh the memories. :) 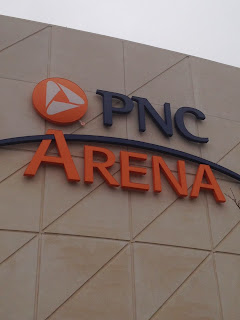 And I just really like this giant picture of Mr. and Mrs. Wuf on the outside of the arena. 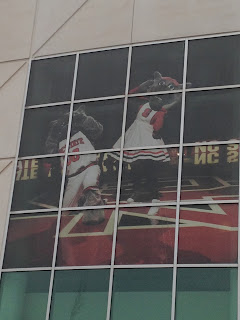 After that, Holly and I headed to a nearby Mexican restaurant that she loves, Cueva de Lobos.  That's Spanish for "Den of Wolves".  It felt rather fitting after a Wolfpack win! :)  We sat at the bar and had a drink while we waited to hear from Mom, and I got caught up talking to the guy next to us about the Kansas/Colorado basketball game on TV.  He and I both love seeing a ranked team (Kansas) lose to an unranked team (Colorado).  It didn't look like it was going to happen, as Colorado went from being up 14 points to them being tied with just a few seconds left.  The guy and I were talking about how Kansas would likely kill Colorado in overtime, but then the coolest thing happened!  Colorado had 3.9 seconds on the clock, got all the way down the court, and a guy was a few feet behind the 3-point line and just FLUNG the ball at the buzzer.  AND IT WENT IN.  Now, I have no attachment to Colorado, but I do like seeing Colorado lose (after they were the team to eliminate us at the Sweet Sixteen 2 seasons ago), and that was just an incredible shot.  Holly and I ate some delicious quesadillas and tacos, and around 6:00 we each got changed for where we were headed next.

Mom finally arrived at 6:30, and we headed off to the theater!  For Holly's birthday this past Tuesday, Mom bought tickets to see "We Will Rock You" at a very nice theater in downtown Raleigh.  We'd actually been here several years ago to see "Jesus Christ Superstar".  We Will Rock You is a stage production, but it's also like a rock show, all (obviously) centered on the music of the phenomenal band Queen.  Holly and I both acquired most of our music taste from Mom, so we grew up on Queen, so we were thrilled.  I actually only got to go because Mom's boyfriend is out of town at a work conference and her best friend had to go to a family funeral.

These are the seats we had, though...the view was PERFECT.  And we were on an aisle row, so we had a ton of leg room. 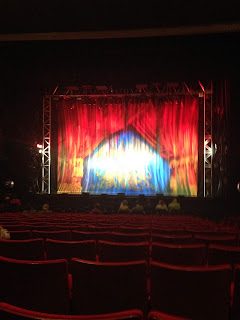 However, I didn't make it to intermission before I realized my head/eyes could not handle the lights in the show.  We only tried it out since my neurologist said my seizures aren't epileptic, and thus strobe lights shouldn't be a problem, but I was seeing stars.  I didn't want to ruin Holly's birthday, so I chose to just go sit in the lobby.  It gave me a chance to charge my phone some, and talk to the very nice bartenders.  They were a ton of fun.  One of them, Casey (the brutally handsome boy of the night :p), kept cracking jokes the whole night on David, because he's a redhead and the world is full of ginger jokes.  Casey also was very sweet and gave me a free water and giant cookie.

Also, because I just cannot meet someone new without sticking my foot in my mouth at some point, here's my foot-in-mouth moment of tonight:
Casey: (after making some joke about David) Oh come on, everyone knows gingers have no souls!  Don't you watch South Park?  He's fine. (and then he winked at me)
Me: Hey, just because you're Mr. All-American Boy doesn't mean you get to pick on him.
Casey: Actually, I'm Canadian.

The nice thing was that even though I was in the lobby, there were speakers out there, so I could still hear all the incredible music and sing along to my favorite Queen songs.  A lady who was working out there also convinced me to do this... 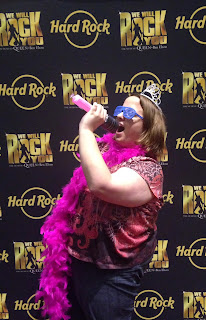 Hey, I always wanted to be a singer. ;)  This may or may not be my new Facebook and Twitter profile picture.  Haha!  Why not, right?  By the time Casey, David, and the other bartender had finished breaking down the bar and headed downstairs, people had started filing out.  (Why people left before the end of the show, I will never understand.)  The first people who stopped to take a picture with the photo props, the mom couldn't work the camera, so I took the picture for them.  And then someone else asked me to take their picture...and before I knew it, I was taking so many photos for people that Mom and Holly walked out and Mom laughed and asked, "So are you the official photographer now?"  Good thing I like taking pictures. :)

We were out of there by 10:20, dropped Holly at her car at Cueva (we switched my stuff from Holly's car to Mom's car before we went to the theater), and then Mom and I headed back to Swansboro.  We listened to music the entire way and sang at the top of our lungs.  And those moments of singing harmonies to the songs of Nashville (the TV show), the Doobie Brothers, Fleetwood Mac, and the Eagles (the credit for the title of this post, it's just a great line) with my mom?  Those are the moments that make me think being here, instead of at Campbell, might actually be okay.

(I didn't fall asleep until after 3 am, and I had a killer headache by the time we got home just after 1, so that's why I'm actually writing this on Sunday night.)