Saturday, Amariah, the kids, and I went to her friend Patty's church for a Christmas event.  My first time in a Mormon church.  It was fun!  We had a big breakfast and then spent the morning working on Christmas decorations that they were bringing to a domestic violence shelter.  Because I am not visually artistic in the least, I seated myself at the table that was making chains out of cut up wrapping paper made into loops.  It was so much fun!  The whole time that I was stapling away, I was talking to this girl from the church and asking her questions about the Mormon faith.

During the breakfast portion, I remembered to get some pictures.  In order, Andy, Amariah, and Soraya with me.  They're simply wonderful.  Aren't Amariah and Soraya beautiful?! 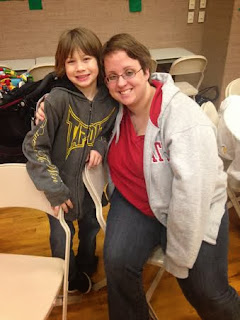 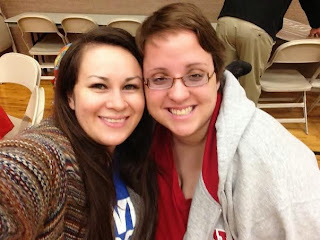 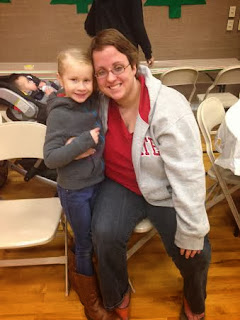 Late in the morning, Alex and his girlfriend, Ciara (pronounced like Sierra, not like the singer Ciara), picked me up from the church and took me to the club.  We just sat there for a bit talking with Alma and Francisco.  Originally, I think I was going to hang out with Alma for the afternoon, but then Alex invited me to the mall with him and Ciara.  So I went.  And I'm really glad I did.

We walked through this farmer's market in the parking lot of the mall and ate gelato in 40 degree weather because why not.  Then, we wandered around the mall for a bit, in and out of stores.  My favorite was this one called Fuego.  It had all sorts of weird and funny stuff in there.  Exhibit A: 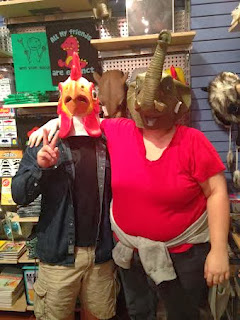 Alex the chicken and Mal the elephant 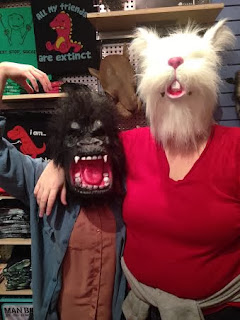 Ciara the gorilla and Mal the (very very creepy) rabbit

From there, we headed to this awesome Tex-Mex place called Chuy's for lunch because when Alex asked me what kind of food I liked and I told him Mexican was my favorite, Ciara squealed, "Ooooo, we HAVE to take her to Chuy's!!!!"  She is loud and SO much fun.  So to Chuy's we went.  On the way, I sang for them.  Ed Sheeran, because Alex loves him, and then Jenny & Tyler and The Vespers because Ciara said she thought my voice would sound really good with folk music and they are the closest thing to folk I have.  I haven't sung in front of anyone in a long time, but apparently today was the day to quit that.

Lunch was so, so good.  I had these deluxe quesadillas that I wanted to eat a whole second plate of.  While we were eating, I told Alex and Ciara my testimony, because Alma had told all of us that I needed to do that, but I also got to hear some of theirs, too.  It may or may not have taken a little bit of nudging, but it worked. ;)  We got so caught up in talking that we sat at the table in the restaurant long after we had finished eating and paid for our meal.  (Okay, Alex paid.  I didn't have to buy anything after the airport  in Charlotte on Thursday until I headed to the airport on Monday.)

We got back to the house and hung out in Alex's room with Dennis.  When I got up there, they were messing around with Alex's old guitar.  Alex and Ciara decided to go buy a new set of strings to replace the one that had popped off, and I decided to hang back with Dennis since I really hadn't talked to him yet.  I showed him the very little I know about the guitar as I worked on tuning it, but then we ended up talking about school and his future and what he wants to do and I worked with him on his math homework.  He is such a great kid.  He thanked me constantly for helping him and apologized if he was bothering me, but I laughed and told him I wouldn't have offered to help if it was a bother!  He's quiet a lot of the time, but sometimes he's a total goofball.  He's kind, loves to serve, and is just all around so sweet.  When we were talking about his future, I just randomly decided to give him my email and told him to email me anytime he wanted or needed to talk, and then without thinking, I said that I could be like his big sister.  And he said, "Well, my mom did adopt you, so I guess you are my sister."  And I smiled and told him that I would be way cooler than Alex.  He smiled and told me, "I always wanted a sister.  And now I have one."  That was when my heart pretty much melted.

Soon enough, Alex and Ciara got back from the music store, and Alma and Francisco got back from...wherever they were (ha!), and we all congregated downstairs.  Ciara had to leave because she had a family thing that night, so I made sure to get one picture with her without us looking like possessed animals. ;)  She is so amazing.  I just love her. 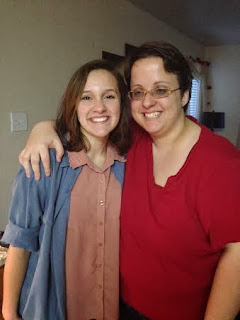 Alex left early to go help get everything ready for night two of Luminaries, and Alma, Dennis, and I headed there a little while later.  There were a TON more people there because the weather had cleared up, and there were a lot more outdoor activities.  When we first got there, I did a little bit of Christmas karaoke.  Ha!  Apparently I really am getting used to stepping out of my comfort zone.  The rest of the night, I just wandered around the whole night, not relying on Alma to introduce me to people.  That was how comfortable I felt there.  It was like I was at a large, crazy, extended family reunion, but way better. 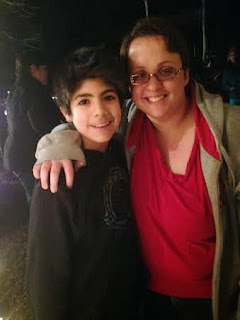 I told Dennis he had to take another picture with me that night since I'd realized he wasn't smiling in the one on Friday and I'd seen what a great smile he has.  Isn't he adorable?!  He made this his profile picture on Facebook, which made me very happy. 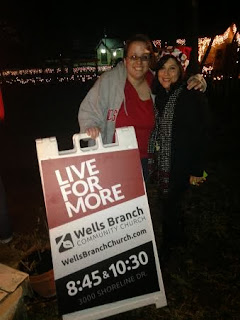 Mama Alma :) this picture was her idea, haha 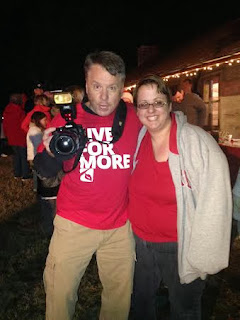 At the last minute, I ended up crashing at Alma's house, which I was more than okay with once I learned that their dog could be kept up away from me.  I went to bed with a smile on my face.  The whole church had made me feel like family, but I was particularly touched by how my relationships had advanced with Alma, Alex, and Dennis.  I really did feel like I'd gained a beautiful-inside-and-out third mom (my British mum is my second one haha) and two amazing little brothers, and I knew they felt the same way about me as their daughter/sister.  Days 1-3 had simultaneously felt so long and lightning quick, I was not looking forward to how fast Sunday was going to go.