Friday morning, I woke up just as Andy and Soraya were headed off to school.  Friday is cinnamon roll day in their house, so I had cinnamon rolls and eggs for breakfast.  Amariah, Ayden, and I headed off to "the club", where Amariah and Alma work.  They sell this health drink/shake called Herbalife.  I just hung out and watched them do what they do and met some of their friends/clients.  Eventually I took a nap in Amariah's dark office.  That was nice, because my headache was really bad, and it was pouring rain outside. 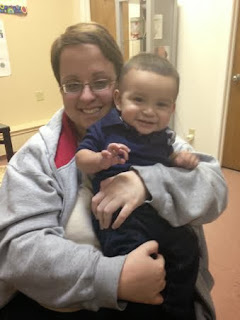 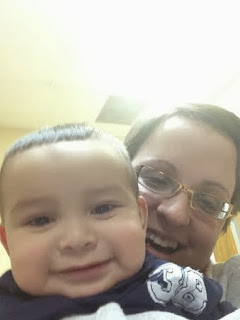 This is Ayden.  He's adorable.  And he loves selfies.

For lunch, we went to this place called Jason's Deli.  I got this AMAZING chicken pot pie soup that was quite true to its name.  It was delicious and perfect for a gray and rainy day.

After lunch, I went back to the LFMC because Chris invited me to come to Preach Practice, which is exactly what it sounds like.  Every Friday at 2:00, the pastors practice the sermons and things for the coming Sunday.  I got there early (of course), so I watched Chris and Ben O., another one of the pastors, play ping pong until everyone who needed to be there got there. 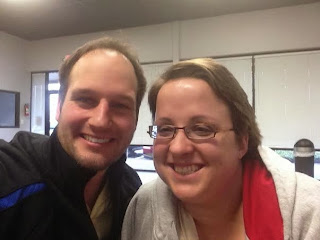 A few hours later, I was feeling better, so Alma, her husband Francisco and I got some dinner, and then we headed out to Luminaries.  Luminaries is a 2-night event held every December by the church, and it's just a big neighborhood Christmas event.  They had to cancel some of the stuff (hayride with Santa, for example) because of the weather, but there were some things to do, and people still came out.  People could still get pictures with Santa in a cabin and do crafts in the main community center building.  The rain did manage to stop for the evening, but the park where everything was held was pretty muddy.  We stayed there until about 9:00, and I spent pretty much the whole night just wandering around talking to people and having Alma and Chris telling me they needed to introduce me to someone.

Pictures!  Because there's not much else to say about this. 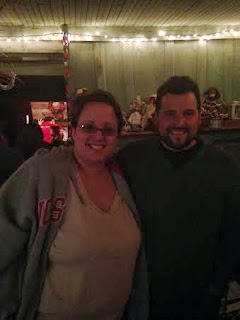 Ben D, another guy (I'm not totally sure what his role is exactly) who I'd met earlier at Preach Practice 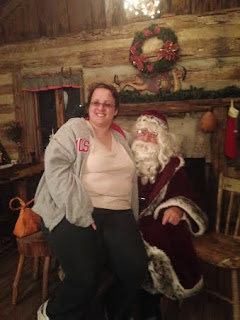 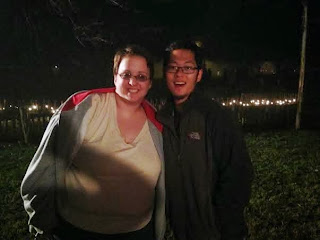 Phil, the youth pastor.  I had met him and his wife, Brandee, and their beautiful baby girl, the night before at the Effie Center.  Brandee was the one who informed me that Chris was a verb.  "You got Plekenpol-ed!" she told me (Plekenpol is Chris' last name) when I told her about how Chris initially got me to join The City and share my testimony with a group of total strangers. 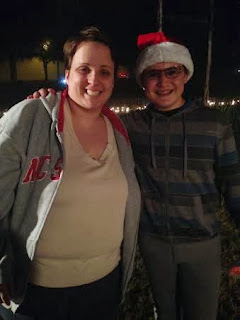 This was one of the youth kids (Scott, I think his name was?) who randomly came up to me and asked me if he could put on my glasses for a minute.  So I took a picture with him.  Because why not? 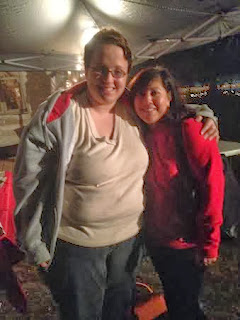 Mama Alma!  She's amazing.  She was already telling me I'd been adopted by this point. :) 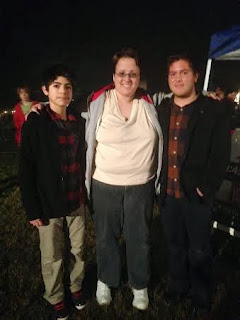 Dennis on the left and Alex on the right, Alma's boys.  Dennis is 13, 14 in February, and Alex turns 18 on New Year's Eve.  Only I would make you take a picture with me within 5 minutes of meeting you.  I didn't realize until much later that they weren't even smiling.  I made up for that. ;)  Funny but true - when I first met Alex, I said, "Apparently, I've been adopted into the family," and Alex nodded and casually responded, "Yeah, my mom adopts a lot of people."  That's Alma for you. :)

After everything was over, Amariah took me back to her place so I could get a shower and go to bed.  I was pretty exhausted, and she was taking Andy and Soraya to the youth lock-in for a few hours (Alma was taking Ayden to her house while they were there).  I took a long shower, and then spent quite a bit messing around on my phone, but I was still passed out cold long before they came home.