Today started off rough.  Mom and I were both woken up at 3 am because Chelsea was screaming.  Chelsea was screaming incessantly because Blake wouldn't sleep (because he wasn't feeling well, mind you), and apparently if she doesn't get to sleep, neither of us do, either.  So I only got three hours of sleep.  That was fun.

But I dragged myself out of bed at 4:30.  I did the usual getting ready stuff while I listened to Mom and Chelsea yell at each other (of course), and then Mom and I left just after 5:30.  God bless that woman for getting up that early for me.  The Jacksonville airport is TINY.  Like, there are 3 gates tiny.  So making my flight wasn't a problem, even though I didn't get there until 35 minutes before the plane was due to leave.

The Jacksonville-Charlotte flight isn't even 45 minutes.  But I spent the whole time talking to this Marine wife who, poor thing, was taking her wild 21-month-old to Buffalo, NY, while pregnant.  I tried to help her best I could because he kept throwing things all over the place.  It was a nice conversation.

Charlotte's airport is, I think, bigger than Raleigh.  I didn't have to leave the terminal, but there are 38 gates in the terminal I was in and they were split into three sections and I had to go to the very end of the biggest section for my connection.  They, of course, moved my flight to that gate.  I also stopped at a sports grill and scarfed down a $10 panini in that hour.  But I made it!

I made it because, for some strange reason, there are some gates in the airport that board two planes at the same time.  My gate was one of them.  So we couldn't even board our plane until the other plane boarded.  And then we got held up in line with all the other planes.  So even though we were supposed to leave at 9:20, we didn't leave until after 10:00.  I couldn't sleep on that plane for some reason.  It was rough.  I got to Austin 45 minutes after I thought I would, but thankfully, my ride was still standing there waiting by the baggage claim.

My ride, Gary, a man from the church, drove me to Amariah's house.  Amariah is the woman who let me stay at her apartment.  Her two oldest kids were still at school, at it was only about 12:30 Austin time, but I got to meet her sweet baby Ayden.  All I basically did was drop my bag off before we loaded right back up to go to Alma's house.  Alma is the oh so gracious woman who sponsored my coming, and is also Amariah's best friend.  We had chicken spaghetti for lunch, and sat there talking for a bit before we headed out to the Live for More Center.

The Live for More Center (LFMC) is basically where everything happens for the church besides the actual services.  It's where the pastors' offices are, where events like youth groups and the after school program are held...you get the picture.  So we went there to meet Chris.  Yes, as in Pastor Chris, the guy that I've talked about multiple times on this blog over the past year.  He was headed out to the main area as we were headed in, and I immediately dropped my purse when I saw him, and he gave me a huge hug.  It was such a cool feeling.  In that moment, that voice on the phone suddenly became a real person in front of me.  It took me a few minutes to wrap my head around the fact that I was there with him.  Amariah only stayed a few minutes before she had to get back because her other kids, Andy and Soraya, were getting home from school, but Alma, Chris, and I went and sat on the couches.  Chris immediately started asking me questions about how things have been: school, health, family, my faith.  It was very touching to see how much he remembered and thought to ask about; one of the most humbling about the connection I've had with him for the past year is that he's put so much effort in investing in my life when there was no guarantee I'd ever meet him and he had a whole congregation right in front of him who needs him.

Two really cool things happened while we were sitting there.  One, a woman named Amanda and her husband Rod came in.  Amanda is a woman I connected with through The City (the church's social network) who reached out to me because she has thyroid cancer.  Chris was like, "You two know each other?"  And I said, "Yep.  We have a bond.  A thyroid bond."  Ha!  Second, while I was talking to Chris, I brought up Muria, the woman he asked me to have a phone call with back at the end of October, and I randomly decided to call her while we were sitting there.  She told Chris that I called her at exactly the right time because this was a particularly rough day for her.  I love when God makes himself known like that. :)

Also, Alma mentioned Community Groups to Chris, and Chris said I should definitely go to a Community Group.  It turned out that one of the Thursday night Community Groups (there's one pretty much every day) is hosted by Tate, a guy I connected with through The City because he's also from NC.  So I decided to go to that that night.  I ended up hanging out at the LFMC for the rest of the afternoon because Alma had stuff to do and so I could see what the church's after school program, the Effie Center, was like.

So I stayed there for the Effie Center and helped out with that and just hung out and got to meet some of the youth, as well as the volunteers that day, some whom knew me through The City and just randomly called my name before even telling me who they were.  That cracked me up!  If I wasn't....well, ME, I'd feel like a bit of a celebrity thanks to them.  Hanging out with high school kids was...interesting.  Needless to say, I do not miss high school.  But they were nice kids, and I loved how they all actually enjoyed being there.

After the Effie Center was Community Group.  I got a ride to Tate's house, which was funny because it was literally only a couple blocks away.  Chris hadn't told Tate or his wife, Debbie, that I was coming, so I just sort of awkwardly walked up to the house and knocked.  Thankfully, this is a church that is rather used to random strangers showing up at people's houses. ;)  Of course, that was the one Thursday that Tate couldn't be there because he had tickets to a concert that he bought a long time ago, but I got to sit and talk to Debbie for a bit until other people showed up (it started at 7:00, I got there about 6:30).  Most people couldn't be there that night, but some did come.  One woman, Erinn, when Debbie introduced me, her jaw just about hit the ground!  It was funny.

Community Group that night was actually CHRISTmas.  And yes, the caps are intentional.  We were bringing Christmas to a family in need...which just so happened to be Amanda and her family.  So we carpooled over to Amanda's family's apartment, ate pizza, watched them open gifts, and just sat and enjoyed talking.

Believe it or not, this is the only picture I got all day.  It's a good sign when you're so busy enjoying life that you forget to get any pictures of it. :) 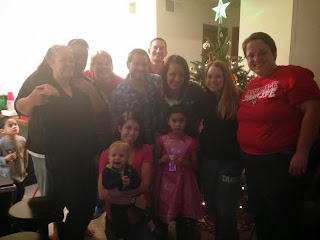 Around 9:00, people were leaving, so I had Alma come pick me up and take me back to Amariah's house.  Andy and Soraya didn't want to go to bed until they met me, which I thought was so sweet.  They really are adorable kids.  Soraya loved to hug me.  After Amariah got them to go to bed, I took a shower, and then sat and talked to Amariah for a bit.  Around 11:00 I went to bed and absolutely crashed.  I guess 3 hours of sleep, a 21-hour day, and flying halfway across the country is a good recipe for solid sleep.  Go figure.