Monday morning, I dragged myself out of bed at 7:30.  Not because I was tired.  Because I simply didn't want to leave.  I had a text from Alma as she took Dennis to school that she'd left breakfast for me on the table, so I got dressed and finished packing my stuff up, neither of which took long at all, and headed downstairs with my suitcase.  I was eating as Alma returned, and Alex came down right around that same time and started getting his own breakfast.  His high school doesn't start until 9:00, the lucky thing!  Alma was telling us how Dennis got up late because he overslept because he was so tired, and I couldn't help but laugh a little.  We kept joking that "because Mal was here" should be a totally valid excuse for the boys for being so dreadfully tired at school and maybe not having their work done. Don't I feel special. ;)

Alma, Alex, and I just stood around talking as Alex ate.  I had time to kill and definitely enjoyed the extra time with them.  Alex actually ended up leaving for school a few minutes late I think, but neither of them seemed to care. 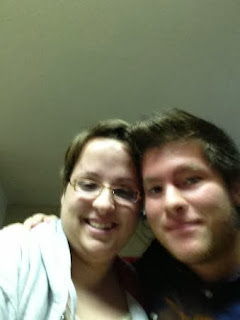 I managed to get one more picture with him before he left.  And I hugged him, but we talked for a few more minutes and then he decided he had to give me one more hug.  I think they like me. ;)

Alex was heading out the door about 8:55, just as Alexis showed up to take me to the airport (yes, the same Alexis from yesterday).  I had to get out of there real quick because Alma was on the verge of tears, and if she started full on crying, I was going to full on cry, too, and I didn't want to be sad.  The visit was so amazing I wanted to keep my mind on all the positive things.

Alexis ran me by a Sonic that was on the way so I could get some more food for breakfast that wasn't outrageously expensive.  We talked the whole way to the airport.  I got to know more about her.  She is such a sweet girl!  I'm thankful that we had already traded numbers because I knew I wanted to keep in touch with her.  When we finally got to the airport, she even got out and got my bag for me, and then hugged me and told me she loved me.  Pretty instant friends, if you ask me. :) 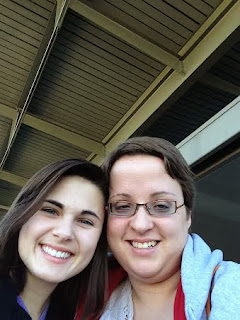 I don't like how I look in this picture, but I love it because I'm so happy I got a picture with Alexis!

The Austin airport is a lot smaller than I realized, a lot smaller than it felt when I was trying to get out of it on Thursday, so getting to my gate took no time at all.  Add in the fact that Alexis and I got there quite a bit earlier than expected, and I had plenty of time to waste as I waited for my flight.  So I listened to music, texted many of my new friends about how happy I was to have been there and how great the visit was, and writing on The City about the same things, and then just simply reminiscing about everything that had happened in the past few days.  I kept looking down at my wrist at one of the few little gifts that Alma had given me throughout the past few days, and I was grinning like a fool. 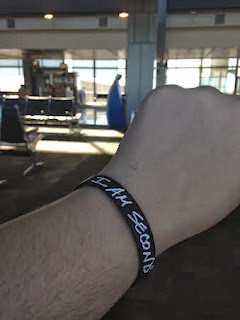 This is an I Am Second bracelet, but not just any one.  It's Alma's.  She gave it to me.  I plan on never taking it off.  Ever.  :)  It's the perfect little memento for me to carry around as a reminder of all that these days in Texas held.  I left a piece of my heart there in Austin, and with this bracelet, I'll never forget that I'm carrying pieces of the hearts of several people there around with me, as well.

This is the caption I put with this picture on Facebook: "Chris told the congregation that I have fallen in love with the church.  And that's true.  I loved these people fiercely before I ever stepped foot on Texas soil.  Spending a few days with them only served to solidify and strengthen that love, but more importantly, it made me fall infinitely more in love with Jesus.  I left Texas with a new resolve to make God first in every part of my life, and I'm going to wear this bracelet wherever I go as a reminder of what this trip did for me."

I hate goodbyes, especially with people as far away as they are.  But I told everyone that this wouldn't be the last time they saw me in Wells Branch.  I'm certain of it.  They mean too much to me now for me to not make my way back to Texas one day.  I don't know how, and I don't know when, but I will be back.

There aren't words to accurately describe the gratitude that fills every part of my soul because of this journey I made to Texas.  There are things I learned this weekend that I am never going to forget, and people who have made a permanent mark on my heart.