It's 2 am right now as I start this, but before I get to all the surprises I'm thankful for today, let me document all the other, non-surprise stuff.

Medical:  they've been forcing me into seizures today.  Four total, by having me work this "arm bike".  It's like an exercise bike, I just use my hands/arms.  Since all the seizures in the past six weeks were while I was out doing stuff, they knew they had to get me to do something if they were going to trigger one, and it worked.  Once the first one happened, the doc (not my normal neurologist, some hospital guy) told me to do it as much as possible, because the more they could trigger, the more they would have to go on with the EEG/video monitoring recording.  I don't know if I'm going to have to keep doing it tomorrow.  I hope not.  Seizures are exhausting enough by themselves, even more so four in a day WHILE severely sleep deprived.  At least Mom will be back tomorrow night.

Visitors:  Yay!  I got to see people today, too.  Holly got up at what I'm fairly sure is a much earlier hour than normal and came and spent a few hours with me before work. 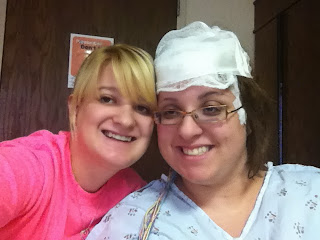 Alex came by when he got out of class!  This was so sweet of him.  Just being around him makes me smile because we're such good friends. 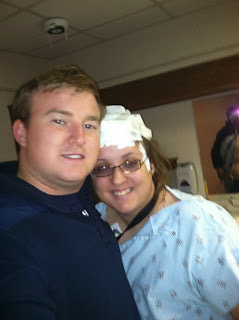 And Matt!  I haven't seen this boy since my birthday, and after his four jobs today, he managed to come by.  And I got to meet his girlfriend!  That hasn't happened since several girlfriends ago when he was a freshman in college.  She was sweet.  But I got to lay on him and hug him and mess with him and tell his girlfriend all about us, and she got to see our bizarre sibling-like bond.  It was wonderful.  11 years, 15 surgeries, and who knows how many hospital stays, and this was the first time it's actually worked out for him to come visit me while I'm in the hospital. 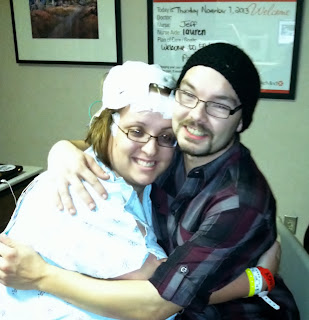 Okay surprises.  There were several of them.  In no particular order...

Hannah, Peyton, Emily, and Travis got back to campus just after 2 am last night...by 7:45 am I was getting texts from them.  And they miss me!

I had some sweet conversations with Ethan and Chirag, a couple of the soccer boys, and found that several of the team members know about my health and have been concerned for me.  My conversation with Chirag was really sweet; I saw what a great guy he is after really only talking to him in passing after games.

Pastor Sean and Carla and Jacob (their son) surprised me by coming all the way up here to visit!  So good to see them since I haven't been to church or small group in weeks because of all this.  Pastor Sean prayed before they left and without even knowing it, touched on things about my life and my future with this story that I've been given that I've been praying about already.

Holly came back a second time, tonight while Matt was here!

Matt actually CAME.  He's never been known for his reliability or punctuality. ;)

My blood sugar crashed and I blacked out while trying to give Matt a hug bye.  Not a full seizure, though.

I've gotten to share my story to varying degrees with hospital staff.

When I texted Mom to tell her they finally managed to trigger a seizure, Mom texted back "Excellent.  Would you like an iPhone 5C?"  Just like that.  So I have a lime green iPhone 5 coming to me tomorrow.  That shocked me big time!  I was perfectly happy with my current iPhone 4, but this makes for a fantastic early Christmas present since I didn't really want or need anything else.

And lastly, while Holly was here tonight, after Matt left, Michael called her (turns out they never broke up, it's weird but they're working things out and I'm happy as long as they're both okay).  And he actually ended up spending 20+ minutes talking to ME.  That wasn't the surprise, though; it was that while we were talking, I or the first time truly understood just how deeply he loves me and respects me.  He said things that I honestly never expected to hear him say, things so kind that they brought tears to my eyes.  And he told me he loved me over and over and OVER again.  And we actually got to talking about faith and spirituality and I learned that he does believe in Jesus, which is surprising since Holly doesn't.  This was definitely the biggest surprise of all.  And Saturday morning, he and Holly are coming back and Holly is gonna take Mom to lunch for some mother-daughter bonding, and Michael and I are gonna stay here and talk about all the stuff we didn't get to talk about tonight because Holly was getting jealous/bored. :)  I want the opportunity to talk to him more, especially since I know that he does believe in God, so I can assure him that all the good things he sees in me, all the compliments he had for me tonight, are all God working in me.  This was never something I felt comfortable talking to him about before, but he actually brought it up.  So I'm really looking forward to Saturday.

I don't think I forgot anything, but since I slept only from 3-6:30 am this morning, forgive me if I did.  Now I'm going to go type up all my contacts on the computer just in case the transfer from one phone to the other has any problem tomorrow.  Murphy's law, ya know.  If you don't back it up, you'll wish you had, and if you do, you'll have wasted your time.  But I need to kill the next almost 40 minutes until I'm allowed to go to sleep, so why not?

Today was a great day.  Love surrounds and astounds me!  God is all over this room.  I feel it.  And I also feel all the people who have been praying for me here with me.  This intense peace and joy I have, it's all God.  That's the only way to explain it.  Only God could bring this many surprises into one day to make my day even brighter.  I'm gonna hold on to this tomorrow when I spend the whole day by myself.

God is moving.  Answers are coming.  I know it.