My Return to Sanctuary.

I got less than 3.5 hours of sleep before my alarm went off at the oh-so-lovely hour of 5:30 am.  I didn't even care though.  I jumped straight out of bed, practically bursting with excitement that the day was finally here!  I ate a little bit, got ready, and packed my last-minute stuff.  Summer arrived at 6:30, and in the balmy 27 degree temperatures (ha!) we grabbed breakfast at McDonald's and headed up to Raleigh.  God bless Summer.  And her seat warmers.  Those lovely seat warmers.

The flights went off without a hitch.  Well, except for the part where I forgot that my hotel would have shampoo and soap and thus tried to bring that stuff on the plane with me (because why pay a $25 checked bag fee when you don't have to?) and the TSA people confiscated.  But other than that, just peachy.  And that one hiccup was my own stupidity.

But the actual flights went off so smoothly.  On my Atlanta-Nashville flight, there was no one in the middle seat of my row, so I got to stretch out some!  It was grand.  I took this picture just minutes before we landed.  I said this last time, but nothing makes me feel smaller or understand the magnitude of God's creation than looking out the window of a plane and seeing land stretch for miles and miles.  How cool is it that there is so much creation out there that you can't even see, yet God still knows you intimately and personally? 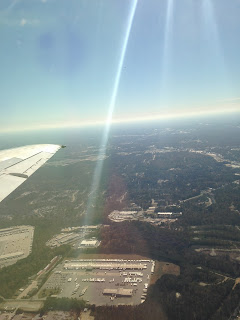 Caitie and Kyla picked me up from the airport (clue number 1 you've landed in Nashville? The airport is playing Taylor Swift. Ha!) and we headed off to lunch.  I was pretty much giddy that I finally got to meet and hug this sweet girl after 16 months of knowing her only through phone calls, texts, Twitter, and the occasional email.  She was talking to Caitie on the ride to Panera, and I took a picture.  This is Kyla's "Really?  You're taking a picture now?" face.  My response?  "Yep.  I'm documenting everything."  Good thing she loves me! 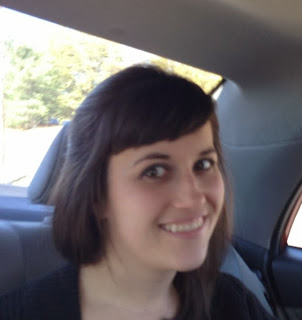 Lunch was delicious, and I had a great time just sitting and talking to them.  Then, we headed over to (what is now) Taylor & Kyla's house so they could sort through wedding stuff.  That took a couple hours, and then Kyla had to go meet her family, so I decided to go to the hotel with her, get checked in and settled, and take a nap.  (She works at this hotel, so everyone who came in for the wedding was staying there.)  But I had to get pictures before we left!  This is beautiful Kyla.  She's even prettier than pictures let on. :) 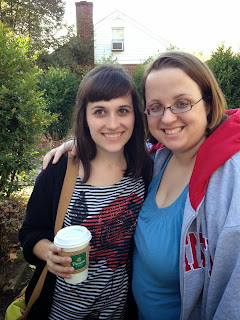 And Caitie!  I know I've said it a million times before, but she really is rad. 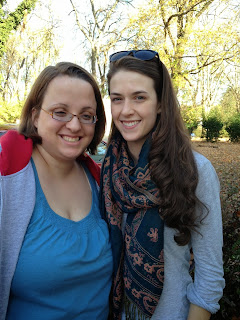 The nap felt great.  Only that night would I remember that pretty much all hotel bedding is down (duck feathers/products) and I am terribly allergic to down, and thus I spent the whole night after the nap sneezing like crazy.  And for some bizarre reason, this is the first hotel I've ever been to that didn't have some kind of alternative bedding on hand for people like me with this allergy.  But I wasn't about to let that get me down!  Otherwise, this hotel was pretty great.  The Best Western near Opryland.  (See, I told you I was documenting everything.) 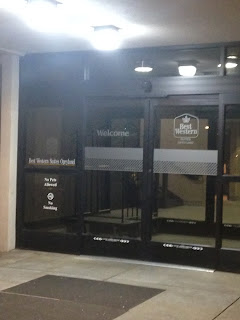 Another plus about this hotel?  It was right across a tiny little street from Logan's Roadhouse.  Logan's is awesome, but I rarely ever get to go there because the only one I've ever been to is down near Mom's house, and they have a big bucket of peanuts at every table, and thus we can't ever go there because of Chelsea's deathly allergy (yes, even to the smell).  So since I woke up at 6:15, and my ride to Sanctuary was due to be there at 8:15, and I was still pretty tired, I decided to just stick there for dinner. 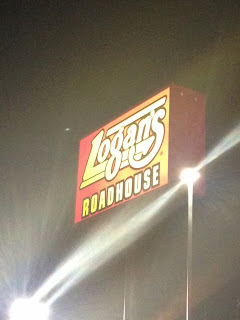 I had the most amazing New York Strip I think I've ever had that night for dinner.  Its seasoning was amazing, it was cooked right, and it cut like butter.  I was in food heaven.  When I headed back to go get ready for Sanctuary, I was so excited I was literally dancing to Katy Perry's "Firework", which Logan's was playing on its speaker system, in the middle of the parking lot.

My ride was just a girl who responded to a post I put in the Sanctuary Facebook group about needing a ride.  It was so sweet of her!  The reality of what was about to happen didn't really set in until she got there (finally, she got lost so she was running a little late) and we headed off to the church.  As soon as I stepped foot in Woodmont Hills, though, I was taken right back to the night of my baptism.  Everywhere I walked throughout the next couple hours, snapshots of that night flashed in my mind.  It simultaneously felt like it was yesterday and a whole lifetime ago. 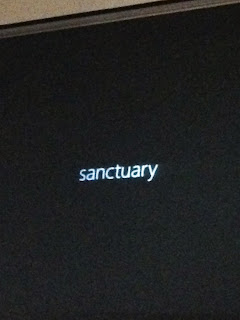 The service was...incredible.  Easily the fastest hour of my life.  Heather and I sat right in the front row, like I always do.  I started crying in the middle of the set, partially because I was so humbled and thrilled to be back there again and partially because I was so moved.  There is nothing like standing in a room with hundreds of other people and hearing you all sing out in unison, praising the God each of you loves.  It brought chills, in the best possible way. 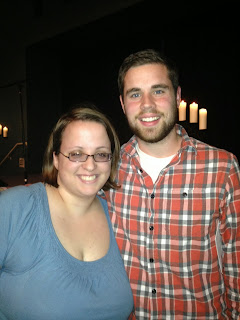 After the service was over, I went up to the stage to talk to Brooks, the only person playing that night who also played the night I got baptized.  Luckily, we've talked on Facebook a few times, so it wasn't totally weird.  I gave him my gift for the band, a thank you card with $30 and a letter explaining why I am so grateful for them and the role they played in the biggest night of my life.  He was great. 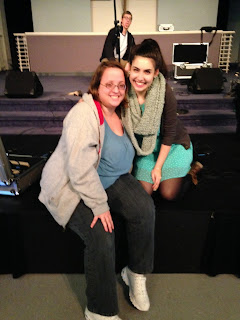 This is Calah (pronounced like Kayla).  She, Brooks, and this other guy named Warren were the ones leading worship.  I originally got her attention just to tell her what a stunning voice she has, and we ended up getting totally caught up in conversation.  It was so strange - no actually, it was so God; we had only been talking for a few minutes when she asked if she could pray for me because God had put something on her heart for me.  And in that prayer, she hit so many things that I've been dealing with that I couldn't ignore that God had orchestrated this whole thing.  She said she needed the encouragement that I had walked up to give her, but she ended up encouraging me in a huge way, as well.  I was so blessed by her!  She introduced me to this verse that I'd never heard before, Revelation 12:11 - "They overcame him by the blood of the Lamb and the word of their testimony."  We only spoke for about ten minutes, if that, so to see her pray for me and encourage me so wholeheartedly was incredibly touching.

I stood around talking to Taylor and Kyla, who surprisingly came that night, and various other people for a bit, but then I got tired and Heather looked bored with me talking to so many other people and she had stuff to do, so we decided to go.  Before we headed out, though, since the lobby was now pretty much empty, I decided to get a picture with the pool. 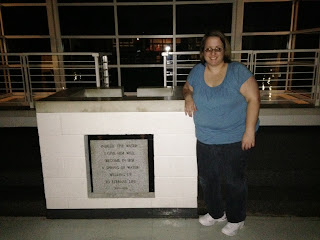 For sentimental purposes, I stood in pretty much the same place as last year. :) 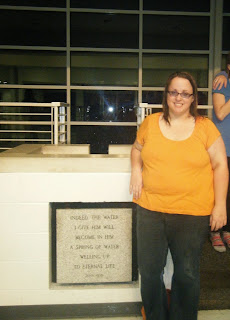 The water...don't ask me why I took a picture of the actual water.  I was pretty delirious with joy at this point.  But that's literally the place where I got baptized. :p 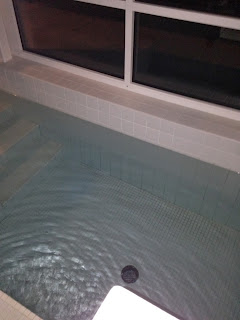 One last picture before we left...I don't know how I didn't cry saying goodbye to that church all over again.  It was so surreal being there again.  I can't describe it properly.  With all the health stuff that had been going on in the past few weeks, I had really gotten off track and lost and confused about who God is and where He was in all of it.  But coming back here, to the place where my whole world changed in the span of a few hours, it was a crystal clear reminder of why I gave myself to God and of the life that was given to me that night by His grace. 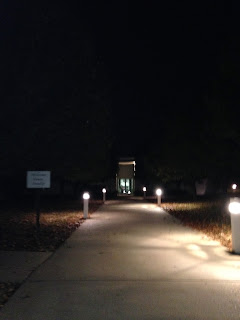 This is Heather.  She is sweet. 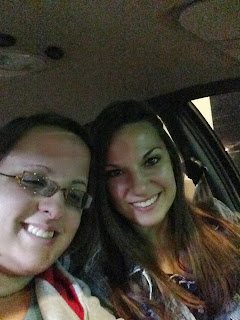 I headed back up to my room and basically just sat around thinking about how amazing that night was before deciding to finally get up and take a shower.  I finally laid down about 1 am and tried to get some sleep.

Thursday, I was thankful for my return to Sanctuary.  For the gifts God gave me throughout the night.  For the reminders of who I became when I surrendered to Him and how He loves me more than I could ever imagine.  For Calah, whom I think He placed in my path for the encouragement and lessons that came with our talk.  The whole night, it was the kind of beautiful that only God could pull off.  As we sang that night, Hallelujah to You, God of the redeemed.  Hallelujah, You've opened blinded eyes to see.  And we will praise You.  You are the everlasting light.  Hallelujah to You, God of the redeemed.