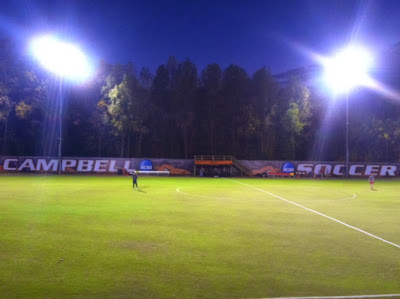 I spent two seasons sitting on these bleachers with this view, screaming louder than I knew was possible, come rain or shine, no matter how cold it was, for the women's soccer team.  But really, it was for Ryann.

I spent this fall going to every game I possibly could cheering on Bryce and the men's soccer team.  Slowly, as I met more of the players after the games, I wasn't just there for Bryce anymore.  I was there for all the guys.  They were (are) humble, hardworking, talented athletes, and they deserved every fan out there they could get.

Tonight, unless the boys get a playoff game here, was my last night sitting on those bleachers, and believe it or not, I was sad.  I love soccer.  I love my school.  But I mostly love the people that I was there to support.

No matter whether they won or lost, these guys were the exact same people, insisting on thanking me for coming out to support them despite me telling them that this was fun for me to do.  When they won, they never acted cocky.  The guys who scored the goals never once got full of themselves.  They celebrated everything together, as a team, more proud of each other than they were of themselves.  They are the prime example of why one of our school's sayings is "Campbell Proud!"  People like them, they are what the heart of this student body is really about.  I'm gonna miss this.  Heck, I already do.

You know what else I'm gonna miss?  This guy. 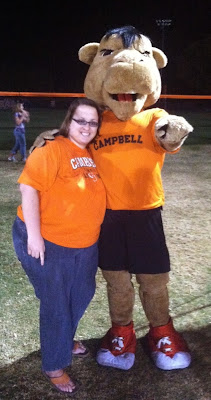 I can't go to a sporting event that Gaylord attends without getting a picture, especially not in my senior year, my year of lasts!  My mascot is cooler than your mascot.  He spent the first half totally adorably flirting and messing with this guy and his friend, Zack, whom I know from church.  (Side note: Zack lent me his jacket because it was unexpectedly windy and rainy and I didn't bring one so I was freezing.  It was so sweet!  Chivalry is alive.)  Then, in the middle of the soccer game, Gaylord went and changed into his football uniform (over the camel suit) and played tackle football with a bunch of kids.  Everybody loves Gaylord!  "Their mascot isn't just a camel.  It's a fighting camel.  And it isn't just a fighting camel.  It's a fighting camel named Gaylord."  I still remember that quote from a Yahoo article on weirdest college mascots.  We may be weird, but we're proud to be Camels!  ROLL HUMPS!

So today, I'm thankful for Campbell pride that shines win or lose, the boys on the soccer team and their incredible hearts, and Gaylord.  Because duh.