(I almost titled this post "Angels", but I thought that might scare my new friends. And I made it through the whole night without sticking my foot in my mouth. Ha!)

So um yeah.  I'm sitting in Wake Med.  My mom got on the phone this morning and my neurologist finally decided to admit me for testing and observation.  I got a "pack a hospital bag" wake up call at 8:20.  That was fun.  Not sure what's gonna happen, not much to say on that front since all the testing doesn't really start until tomorrow.  I am incredibly thankful for this, though, because falling face first on bricks is pretty much my limit.

So I want to spend my post talking about a totally God-ordained event that happened tonight.  A few days ago, a girl named Hannah started following me on Twitter.  I recognized her twitter name from some posts from some of the guys in my Reformation class.  Today when I mentioned that I was all settled into my hospital room, she replied, "where at?"  I told her where and totally not seriously said, "I would love visitors!"  I mean, I would love visitors, but it wasn't me asking her to do what she did.

When I found out that there are no set visitor hours and people can come 24/7, Hannah decided she was coming to visit me tonight.  Me.  A girl that she only knew from anything the Reformation guys had told her and Twitter.  This hospital is at least an hour away from Campbell.  I was stunned and so tbankful.

Later, I realized another girl, Emily, was following me.  We talked for a bit, and she told me she was coming with Hannah.  Yay, another face to see!

They showed up at 11:00, when Hannah said they would be here after she finished some evening activities...and they brought two more people with them, their friend, Peyton, and Hannah's fiancé, Travis.  And then they sat in my room for the next two hours listening to me talk about my life story, my faith, God and what He's done.

When they finally had to leave at 1 am, because, hello, it's a school night, they thanked me.  They THANKED ME.  A stranger.  For sharing more than I think they ever expected to know.  And I can't accurately describe what a gift they were to me, when Mom has gone home until Friday night and this was the one block of time I didn't think anyone I knew could come visit me.  People from my school who knew me via Twitter (Hannah and Emily) or not at all (Peyton and Travis) got in a car and drove an hour one way to pretty much just listen to me talk for two hours.

I mean this with every piece of my heart and soul, I truly believe that God sent these angels to me tonight.  They walked in strangers, they walked out friends, having just prayed with me and told me they love me.  I can't even accurately explain what a gift they were to me, and honestly, I'm not sure I want to.  There was something about tonight that felt so special, so...sacred.

You wanna know what solidified my belief that God orchestrated this whole meeting tonight?  Not only does Hannah know several of my Reformation brothers, she, Emily, and Peyton were in the hall on Monday where the seizure happened!  You won't ever be able to convince me that that was a coincidence.

So yeah, I'm thankful for these new friends.  These friends who feel like God-sent angels, who were a HUGE blessing to me in a night when I could easily get caught up in my own head, and were gracious enough to tell me what a blessing I am to them.  God sent them straight to me tonight, and I am SO thankful.  Not many people would get in a car late at night and drive an hour one way to talk with a stranger in a hospital for two hours...they did.  And now it's 2 am, I'm only allowed to sleep four hours a night (sleep deprivation might trigger a seizure), and I am grinning like a fool with joy that no language could ever accurately describe filling my soul. 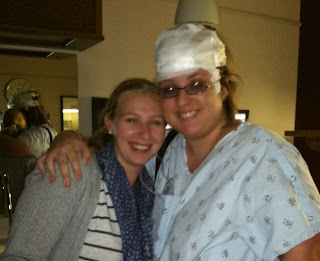 Sweet Hannah...the one who started all of this :) 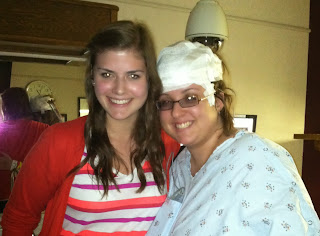 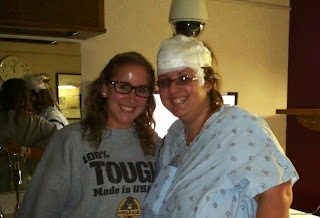 Peyton. I love her name! 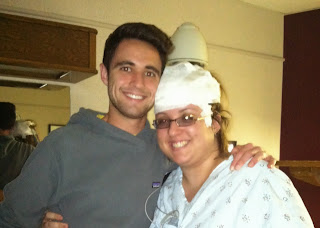 And icing on the cake of a wonderful night, they brought me this. 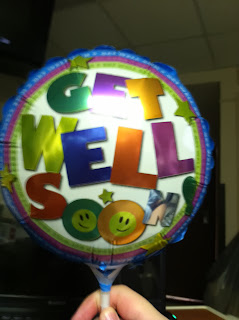 And a bag of some of my favorite snacks: goldfish, M&M's, Snickers, Reese's cups, and Spongebob fruit snacks (the fact that they are Spongebob cracked me up, by the way).

God is so good.  The love that surrounds me and the heart of my school family never ceases to astound me.  Hannah, Emily, Peyton, and Travis walked in strangers, and walked out friends.  Four beautiful reminders that God put right in front of my face of just how much I am LOVED.