So today was family reunion day.  As many members of my dad's side of the family get together once a year in October and eat barbecue and spend a couple commenting on how much everyone has changed.  It's always a very awkward day for a couple reasons...one, the relationship between us and my dad's (very large) family hasn't always been the greatest, and I don't think you could've ever called us close.  My first cousins greet and treat us like acquaintances, for example.  Second, my dad's mom had like ten siblings, and all of them had several kids, and most of those kids had kids, and now even some of those kids have had kids.  Put me in a room full of people I see once a year (if that!), and every year, it feels like I'm meeting them all for the first time.  This year, in fact, I think there were a couple people that I was actually meeting for the first time.  So basically, considering "shy" isn't exactly how you'd describe me, my traditional greeting for the majority of these people at these reunions is "Hi, I'm Mallory, Frances' son Keith who passed away's youngest daughter.  What's your name and how am I related to you?" And pretty much by the time I get the family tree of whoever is there that year straightened out in my head, it's time to leave and I start all over again the next year.

This was actually the only picture I got...my traditional picture with Blake before I leave every break.  Because Mom totally surprised me and agreed to let Holly take me back to school after the reunion! 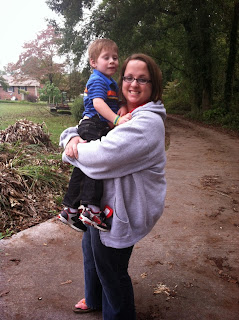 He wasn't in the mood to take a picture, to say the least.  All he wanted was to run around in the grass and trees.

The only other picture I took in the 48 hours that I was with my family was a picture of the view that I had for most of Friday afternoon, after my head eased up enough for me to stand being awake. 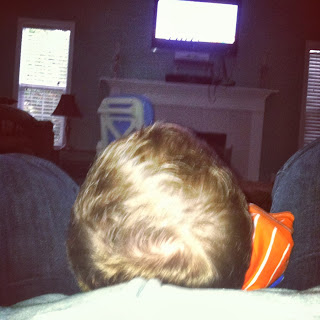 This would be me, laid back in a recliner with the feet propped up, and Blake laying between my legs using my stomach as a pillow.  I will forever volunteer to be this kid's pillow as long as he's willing to snuggle with his Auntie Mal. :)

I guess there just wasn't a whole lot I wanted to remember about this particular Fall Break.  So yes, after the reunion, I convinced Mom to let Holly drive me back to school instead of her doing it because she seriously needed to go home and take pain meds for her partially torn rotator cuff (yikes!).  Holly actually volunteered to do it.  This gave Holly and I some one-on-one sister time, and I made it back just in time to drop my stuff off and head over to the soccer field.  The game was good.  It ended in another tie after double overtime, which sucks, but those boys are fighters and you can tell they put everything they have into every game.  I just feel bad for the seniors, that their last season isn't going the way it should be.  They have the talent; the score just rarely seems to come out in their favor.

During halftime, I stepped WAY outside of my comfort zone and participated in the halftime game that they have for people in the stands.  Basically, two people volunteer, and since the girl searching for people was having a hard time getting someone to agree to it especially since there were way less people there than normal because it's Fall Break, I got that random spontaneous streak in me and decided to do it.  Turns out, I ended up doing it against an athlete who goes to my church.  We started at the midfield line, spun around 5 times, dribbled to the penalty box, spun around 5 more times, and then shot, and the first person to make a goal won.  I did.  I'm fairly certain he let me win, but the people who I was sitting near said he looked really bad, so I don't know.  If he did, that was very sweet; it's small and stupid, but doing something like that in front of a crowd of people is intimidating, especially because of my disabilities, so it meant a lot to me.  I won a coupon for a free frozen yogurt from a place nearby.

After the game, I headed into the athletic facility to say hi to Bryce and Justin.  Bryce spent a good bit of time in an ice bath, and his girlfriend is down this weekend because it's her fall break, too, so when he was out he spent most of his time talking to her and his family, so I didn't get in his way.  I was going to leave after I saw both of them, but then I ended up introducing myself to one of their teammates, who subsequently introduced me to another teammate, and long story short, I think I've met the majority of the team now.  It was really nice.  They're a great group of guys, and several of them were so sweet that I came up early on my Fall Break to see them play (they didn't know that I came for several reasons, but you know, whatever).  I'm excited that I'll be able to go to their last 3 home games and support them.  My last soccer-spectator season here at Campbell, ah!  Eventually, one of the guys I was talking to insisted that I get something to eat, which brought back a lot of memories of all the post-game tailgates I went to with/for Ryann. :)  I was sort of hoping that if I waited around long enough, I could get someone who was willing to give me a ride back to my dorm because I was/am rather sore from that halftime fun.  So I just hung out and talked to some of the players and their parents who were hanging around.  One of the player, Scooter, his parents recognized me as the girl who had won the halftime game, so they asked me what I won.  I told them, and Scooter's mom told me that this frozen yogurt place is pretty much his favorite ice cream shop in all of NC, so I just randomly decided to give my coupon to him since I'm not big on frozen yogurt anyway.  It seemed like I kind of made his night, and I like making people happy when I can, especially when it's not really a sacrifice for me. :)  In return, he gave me a ride back to my dorm, which worked out great because he also gave a ride to one of his teammates who lives in a dorm right near me.

When I got back, I cooled down for a bit because I was really hot despite the fact that it was barely warm outside, did some computer stuff, unpacked, and loaded the rest of my medicine cube.  Then I shaved and took a fantastic hot shower.  Now, it's 2:30 am and I'm waiting for my laundry to finish drying before I can go to bed.  I still need to pluck my eyebrows, anyway, so it works.

This is another reason I am happy I came back tonight.  I slept in the recliner at the house because the spare bed is so uncomfortable, but it's really hard to get restful sleep with dogs who like to bark for no reason and a wild 3-year-old who wakes up at the crack of dawn.  About 11:30 this morning, knowing we didn't have to leave until close to 2:00, I knocked on my mom's door and asked her if I could come in.  She asked me what was wrong, and I said, "I'm awake, and I don't want to be."  She laughed.  So I did get a nap in her room, but I'm still looking forward to climbing into my clean, amazing bed in an hour or so.

So yeah, between all the extended family and meeting so many of the soccer players, my brain feels a bit like it's on name overload.  Maybe that's adding to why I'm so tired.  That and it's past 2:30 and I've already taking my sleeping pill and I slept like crap last night.

I love this school.  This school is home.  Campbell proud, always and forever. :)