I'm the kind of person that when people tell me what's going to happen, or what something's going to feel like when it happens, I don't really get it until I experience it for myself.  It's like little kids who get told not to stick their hands on hot stoves because they'll get burned, but they do it anyway because they have that naivete, and they need to feel it and figure it out for themselves.

Going into this week, I knew that the enemy was gonna come attacking, and he was gonna come attacking hard.  I believed it, but I didn't know how to prepare myself, so I just faced every day the best I knew how, trying not to think about that idea.  Here's the thing; the devil doesn't really care if you ignore him, he'll still come, and he'll probably take advantage of the fact that you're not paying attention to hit you even harder.

I was up before the sun again today, in too much pain to sleep, but not awake enough to focus on work.  So I listened to music, my Youtube playlist, the worship music I have on iTunes and Spotify, whatever I could get.  In Jesus > Religion, Jeff writes:

"I hear a lot of people say that the fear of death and the fear of public speaking are two of the main fears in my generation, but I disagree.  I think it's the fear of silence.  We refuse to turn off our computers, turn off our phones, log off Facebook, and just sit in silence, because in those moments we might actually have to face up to who we really are.  We fear silence like it's an invisible monster, gnawing at us, ripping us open, and showing us our dissatisfaction.  Silence is terrifying."

Yep.  I was running away from the fight I knew was headed my way and the fear gnawing at the pit of my stomach.  I didn't do a very good job at distracting myself, though, until I met Austin for lunch at 12:30. 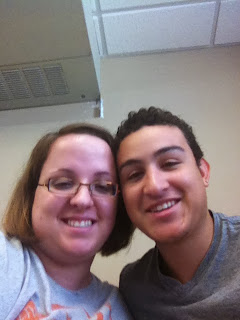 It was a sweet hour.  That's all I know to say.  In just two hours of conversation, I feel like we've known each other for years.  Before he left, he told me he was going to come see me tomorrow, but then I reminded him that tomorrow is appointment day, so he just said he'd be praying for me all day and that I "better" text him.  Which, duh.  Of course I will.

The rest of the afternoon was alternating between music and actually getting a little bit of reading done, anxiously counting down the minutes until I got to see Summer. 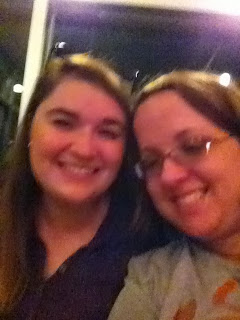 We had dinner, and again, I was able to forget for a while.  Because of many different things, she and I haven't had dinner together in a while, or really spent any time together at all, so we had a lot to catch up on.  Then it was Vesper time, something I've been looking forward to for at least two months!

Little did I know, that was when the enemy would really start trying to have his way with me.  Once the show started, and I had nothing to say to anyone and all I could do was listen to the music, I couldn't focus.  I couldn't focus on the incredible show, or how happy I was to be somewhere besides my dorm room.  I let the devil get in my head over and over again to the point that, basically unless the band was playing one of their new songs, I couldn't stop thinking about tomorrow.  And the 2 days after that.  And what could happen.  I never thought I'd be thankful for a show to end, but it gave me a chance to talk to people again.

I got to talk to Summer, as we waited for the crowd to dissipate, about the show, but also about my relationship with the band, and even beyond that, how she sees me and my story and what she believes God can do with it.  She asked me questions about what I'm open to, and I told her the truth, that if God opens the door for me to talk to people and share my story on a bigger level, I'll run through it.  She felt like crap tonight, and she was still such a sweet friend and an encouragement.

Then, eventually, I got to talk to the band and Caitie, as they straggled out after loading up everything and after talking to people as the crowd cleared.  The people were closing up, so we went outside, and Summer gave me a moment to talk alone with them.  I gave them a medical update, but also got to share my heart with them a bit about how they're still helping me even when we're separated by such great distance.  I could barely make it through what I needed to tell them because of the emotion welling up in my throat, but they were patient and listened and Taylor, always the most vocal one, responded with what I'm pretty sure is how they all see me and us and our friendship.  We prayed together, and in that moment, I felt a little more secure, knowing that I have people that are walking with me even when they're not physically with me.  Do you believe it was a coincidence that my night with these incredible friends of mine was the night before all this craziness at the doctor starts?  Because I don't. 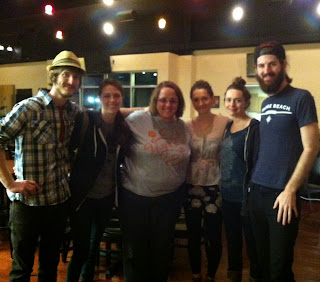 Summer and I drove home, talking the whole way, and I was able to push the devil away...until she dropped me off at my dorm.  Something in me just broke, and I was crying before I knew what was going on.  I knew I couldn't stand walking into my room alone, so I called the one person that I knew would come, even at 10:40 at night.  You know that Carole King song, "You've Got A Friend"?  Well, if you don't, part of the lyrics say, "You just call out my name, and you know, wherever I am, I'll come runnin' to see you again."  Yeah, well, that's Austin.  He told me I could call him anytime, and for some reason, he was the first person that popped in my head tonight.  So I called him.  And he came as fast as he could.  And we sat on the ledge outside my building for 20 minutes.  And I cried and vented, and he pointed me back to the Truth about God over and over and over again.  His profound and unwavering confidence in what the Lord is going to do for me was a lesson that I truly needed at that moment.  I told him I've been drilled all my life to avoid being a burden to people, but he told me that that's what the Christian community is about - carrying each other through dark spots, having hope when someone is hopeless, having confidence when someone can't find it. He held me in possibly the tightest hug I've ever felt as he went to the Lord for me.  And in possibly the most baffling move of the night, when I told him what a gift his friendship was, and how thankful I was that he came so late just because he knew I needed him, he simply squeezed my hand and said, "You're the true gift."

I'm blessed to serve a God that's an overachiever.  I just wanted someone, one person, to be here through this that was loyal and dedicated in reminding me that I am not alone.  He gave me dozens.  I begged to feel love tonight, and He gave it to me in spades, from Summer, the Vespers, and Austin.  I may not be as sure of what is going to happen in the next few days as Austin is, but here's what I am sure of.

God always wins.  And He chased me down tonight to get me to stop fighting a battle that He's already taking care of.

Labels: friends, God, me, The Vespers