Letting My Guard Down

Here's something I don't think I've talked about here in a while, to pretty much anyone.  But after how amazing tonight was, I feel safe, I feel like it's time.

The Brennan debacle of last year and my reaction to the constant back-and-forth is well-documented on this blog, and this year has dealt with a lot of emotional blows regarding Landon and Jay, and how the two seemed to be on a perfectly timed cycle so that as soon as one of them took a break from my life, the other would show up at just that second so that that feeling of turmoil never left me.  All that, too, is well-documented on this blog.

But what I didn't write about, or speak of to nearly anyone (no one that I can recall right now), is how all of that pushed me so close to turning back into the girl I used to be, or how often I wondered if I could ever actually be friends with a guy without getting dragged around or hurt.  I was so close to retreating back into my old shell, the one I shed a while ago, the one that kept me protected from letting myself trust anyone of the opposite sex.  Sometimes you just get so tired of getting hurt that the only option that seems available to you is the one that involves running away.

But then, this semester came.  I joined my Protestant Reformation class.  Bryce and I got to know each other, and surprisingly enough, I wasn't scared of him.  Letting myself trust him wasn't hard.  Then, I learned that Chris is a much different guy than the impression I had of him in my mind.  And slowly, I learned that all 15 guys in my class had much more to them than met the eye.  Day by day, I felt myself becoming more at home in that class, not worried about doing the wrong thing or making the wrong impression.  More and more, I was able to just be.  As that feeling of security grew stronger, so did my freedom in calling these 15 young men, 13 of whom were complete strangers to me in the beginning, my brothers.

Still, hanging out as a group in class or talking to them on Facebook is a completely different story than actually sitting across a table and talking one-on-one with somebody that I didn't know all too well.  But when Jayshawn offered to take me out to dinner and to the Theater Department's fall musical (as friends) so we could get to know each other, there was no way I could say no. 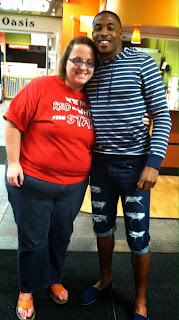 I can't even begin to tell you how thankful I am that I said yes.  For the first time in a long, long time, I let my defenses go.  I shared pieces of my heart with Jay that very, very few people, let alone guys, have seen.  And I wasn't even scared to do it.  There was something that was just so easy about tonight and how we talked that it honestly never even occurred to me to keep my guard up...and that is a huge deal for me.  I don't know how and I don't know why, but I felt safe in being vulnerable with this guy that I just met six weeks ago.  That is such a gift from God, it blows my mind.

We spent an hour before the show and about an hour and a half afterwards just talking, about God, faith, our class, our testimonies, family, church, friends, so much.  I was as calm talking to him as I would have been if I was sitting across the table from Matt.

I told Paige a few weeks ago that I was tired of being scared of people.  I was tired of living in fear of trusting the wrong person again.  And I told her that I just wasn't going to be scared anymore.  When I said that, though, my head still had to do some convincing of my heart.  Being afraid is exhausting, and I knew it even then, but I wasn't totally ready to let go of that fear and the control I thought I had over my heart and whom I chose to share it with.

Until tonight.  Suddenly...I don't feel afraid anymore.  Jayshawn pegged pieces of my personality just from what I shared with him, understood what I told him with no judgment at all, and told me flat out the good qualities he saw in me.  I was so humbled, and so honored that he was there to listen to me with no pre-conceived notions or expectations.  There were points when I got emotional in what I was saying, but I was honestly so distracted by being honest with him that I didn't care in the moment if he saw me cry.

I knew that joining this Protestant Reformation class was a brilliant choice and a tremendous blessing, but what I didn't expect is how the friendships I made with these students would affect me, humble me, and free me from the fears that old scars still haunt me with.  Another piece of my One Word: releasing my fear of being hurt.

I let my guard down 100% tonight for the first time in a very long time and it felt....good.

Glory be to God.