Let's start from the beginning, shall we?

Saturday, I woke up at the crack of dawn.  Okay, it was more like 7:45, but still, way earlier than I should have been awake on my birthday.  Eventually, I fell back asleep, though, and woke up about noon.  Mom, Mommom and Blake were at the beach (I was too sunburned to go) and Chelsea was at work, so I had the house to myself for about two hours before Mom and Blake got back.  I was texting Matt on and off, and he showed up right about 3:00 because his parents were out so he had nothing to do.  As soon as he walked in,  he was a Blake magnet, and I tell ya, I always knew my best friend was wonderful, but I had no idea how adorable he was when he gets around small children.  He played with Blake for two hours straight until Mommom got here with Chelsea and he was SO good with him the entire time.  My heart just about melted. 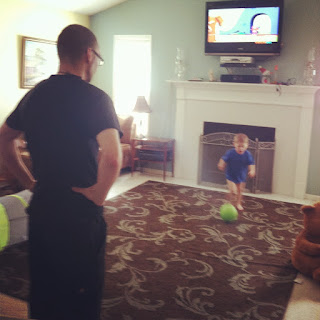 Since we didn't go out to a restaurant, dinner consisted entirely of things I chose: steaks, asparagus bundles, fresh corn on the cob, and my mom's incredible garlic mashed potatoes.  For once, all my grandma had to do was bring over the dessert, which was also my choice - Cheesecake Factory cheesecake: strawberry, blueberry, and chocolate mousse.  Guess which one I picked? 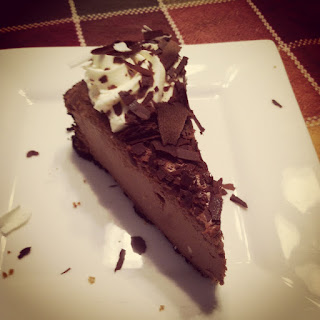 I had two Cape Cods and everyone had some limoncello, which I hadn't had since I was in Rome in 2005.  Funniest line of the night, Matt's immediate reaction to limoncello: "It tastes like the smell of Pine-Sol."  During dessert, Matt's momma, aka my other mother (she's "adopted" me like Mom's "adopted" Matt), came over to see me.  The funny thing is that she and Mom have the same name, except she is Sherri and my mom is Sheri. I thought that was super sweet of her, but what Matt didn't tell me was that she was bringing me a gift!  Then again, Matt may not have known. 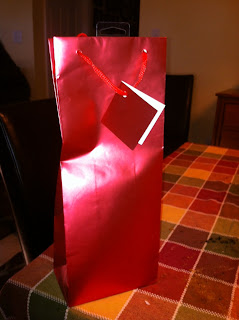 It had a bottle of Mary Kay after sun replenishing gel, because she sells Mary Kay and saw my post about my sunburn, and two little bottles of rum.  It was great.  She stayed for about 45 minutes, and of course I had to get a couple pictures before she left. 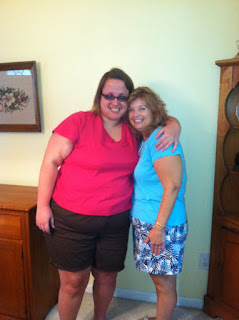 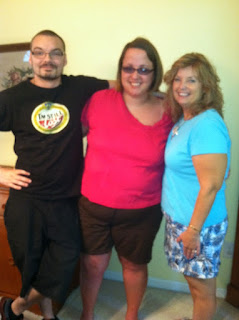 Excuse the off-kilter shirt.  I'm not the most observant person.  Ha!  After she left, it took 45 minutes to get Blake in bed and Chelsea to leave us alone.  But then, like I said yesterday, we spent the next 3+hours just sitting on the couch like this. 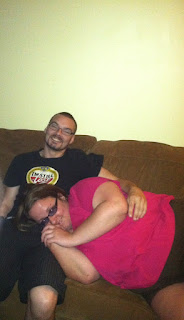 Well, eventually I moved on to my back because my hip hurt, but still.  We just talked.  I showed him the blog post I wrote about him on Tuesday, he told me I was a cheeseball and thanked me.  But after that, we talked.  About God, religion in general, politics, the news (because apparently I'm not the only nerd in this friendship), and our history as friends.  We haven't had a night like this since before he moved to Raleigh in December 2011 right after he graduated college, and it was exactly what I needed and wanted.  It was pretty cute, too; while we talked, he alternated between rubbing my hair and resting his arm on me, and sometimes he'd just randomly lock fingers with mine.  It's great, because we both know I am totally over him, we can be intimate like this without him having to worry about me getting the wrong idea. 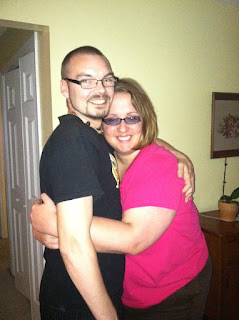 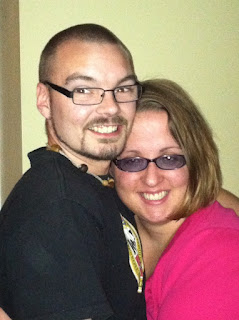 (two separate pictures, I'm not so weird that I'd crop one picture just to post it twice)

There aren't words to describe the love I have for this kid, or the love I know he has for me.  He eventually left just after midnight because I knew I had to get up at 5 to get ready for work.  He gave me a peck on the lips goodbye, again something he's never done before and could never do before I stopped having feelings for him, and I thought I was going to bed, but then Brennan called.  Two minutes later, Matt showed back up because he forgot his phone charger inside, and he gave me another kiss goodbye.  Then I spent the next 45 minutes talking to Brennan.  I knew I had to get up at 5, but I didn't care - I will always pick talking to people over sleeping, and we haven't talked in quite a while.  It was so good to talk to him.  He initiated subjects by asking questions, gave me advice and his opinion, updated me on his life, asked me on his own to text or call him after my appointment on Wednesday, and prayed over me before we hung up.  I already believed it before, but this conversation was such good reassurance - I legitimately believe that we both learned from our mistakes last year, and he really is different this time.  He even said that he will make sure we see each other when I come to Nashville, and that he's looking forward to it.  I'm so happy I listened to my heart and didn't give up on him.  The night already felt perfect after spending so much time with Matt, but talking to him was just icing on the cake.

I didn't fall asleep until close to 2 am, and woke up at 5 to get a shower.  I was at work until noon, then came back and hung out with Mom and Blake.  I got to take about a 90-minute nap before Mom needed my help entertaining Blake while she cleaned in preparation for Holly and Michael's arrival.  Chelsea and Mommom arrived just before 5:00, and Holly and Michael arrived just before 6:00.  Because both of them were able to find someone to cover their shifts today and thus did not have to leave until late tonight, we had an easy meal last night: tortellini, leftover corn, yellow rice (which I also love) and broccoli.  My grandma brought over these cheesecake bites that were delicious.  Holly, Michael, and I left just after 8:00.  We had to go to Morehead for them to get bathing suits because we were planning on going to the beach today, but we were back in town by 9:30 and headed to The Icehouse (just a great local restaurant) to have some drinks.  It was Holly's idea to take me out for drinks, which was sweet of her and exactly what I'd hoped for.

Of course, the one night we go out, the bar is completely FILLED with people I went to high school with.  I thought it was going to be super awkward, but it wasn't.  People were cordial, and a guy I know named Tyler even bought me my first drink. 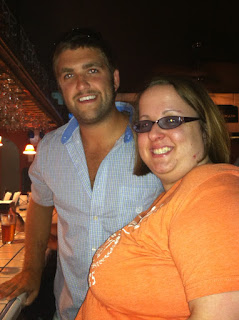 I guess people really do grow up.  :)  I had a Fuzzy Navel (peach schnapps and orange juice), some concoction Holly learned from her time at Ruby Tuesday's called a Relaxer (I couldn't tell you everything that is in it, but it was good), a margarita, a small taste of Jim Beam bourbon, and a Royal Flush (Crown Royal whiskey, peach schnapps, and cranberry juice).  I was feeling good by the end of the night!  Haha!

Some random dude that Michael started talking to at the bar took pictures for us. 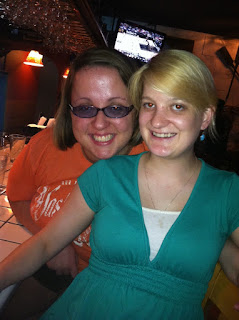 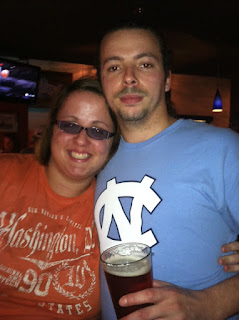 Michael thinks he's too cool to smile for pictures.  Just kidding!  I love him. 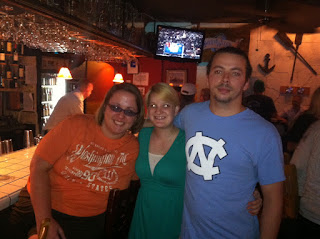 :)  They both took great care of me, the alcohol virgin, the whole night.

We got back around 11:30, and Holly came up with one more concoction she wanted me to try (shh! Don't tell Mom! :p), and we hung out until close to 1:00 when finally, I crashed. 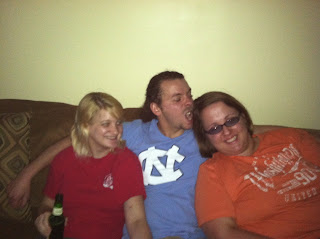 This is normal Michael.  I think he'll fit right in with this family. ;) I didn't even notice he was doing that.

Don't worry, I'm not becoming a big drinker or anything, but I just wanted to do something stupid this one time.  Not many people in this day and age actually wait until their 21st birthday to get drunk for the first time, and I didn't do anything absurd or black out or anything.  Besides, Holly and Michael wouldn't have let anything happen to me, and now I know that I can have a few drinks without affecting my seizure disorder.

Turns out, that much alcohol knocks a girl out.  Aside from getting up to go to the bathroom, I didn't get up until 4:00 this afternoon.  Thankfully, Holly and Michael made me drink enough water last night that I didn't have a hangover headache or anything.  I guess two consecutive days is as long as Chelsea can go without being mean to me, but hey, I'm just happy she didn't cause trouble on my birthday, so today was kind of rough in that aspect but I tried my best not to let it get to me.  I had Brennan's advice in my head, which helped.  Tonight we had Hawaiian baked chicken, asparagus bundles (because thanks to some miscommunication and forgetfulness, we had six bunches of asparagus going into this weekend), the end of the mashed potatoes, yellow rice, and the end of the cheesecake and cheesecake bites.  It was great.  I was pleasantly stuffed.

In other news, I had a pretty bad conversation with my boss today.  While I thought they were being understanding about my disabilities, but they're actually not, so as soon as I get another job lined up, I'm quitting.  I just don't have the time or energy to spend all summer miserable because of these people.  Me being me, right after I got off the phone, I started crying, partially because I was upset that I'm essentially being punished for my disabilities and partially because I knew I needed the money in order to afford a plane ticket to Taylor and Kyla's wedding in November.  But God being God, two really wonderful things happened immediately after that.

First, Chelsea remembered I had gotten a card in the mail.  It was the SWEETEST birthday card from Caitie.  I seriously teared up and smiled so big.  I'm gonna treasure it for a long, long time. 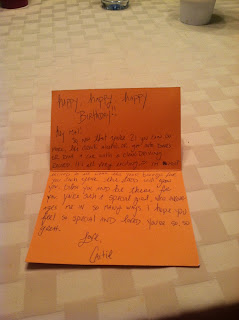 Also, my grandma overheard my mom and I talking about how much I need the money to go to Nashville in November, and she oh-so-generously offered that, if I can't get enough money saved, she has enough frequent flyer miles that she would get me a ticket with those and it wouldn't cost her a dime.  Of course, I want to be an adult and pay for this trip on my own, but it was so nice to have this backup plan.  So it's officially official: I'M GOING BACK TO NASHVILLE!!!!!!!  149 days and counting.

And so ends this absurdly long recap of the past few days.  God has been so good to me.  I have had an amazing weekend surrounded in several forms by people I know love me.  Spending so much time with Matt totally rejuvenated me to face the next two months before Campbell.  Talking to Brennan gave me a new perspective.  All the texts and calls from people reminded me just how NOT alone I really am.  A night out with Holly and Michael gave me a chance to let loose and totally forget my troubles for one night.  My grandma gave me an incredible gift.  The past three days have been filled with more blessings than I ever could have thought to ask for.  God is so good.

I'm ready to see what the next year holds for me.