It's really awful when you catch yourself missing someone whom you know was never anything but bad news.

There I was, sitting on the beach in the late afternoon sun, listening to the waves crash and feeling the wind blow.  I was the most relaxed I've been in quite some time.  It felt like a pretty perfect scenario...

I remembered a story he told me once, about how he had seen me on that very beach, laughing and playing in the water.  How he wanted to run up and grab me but knew he couldn't.  How he hated that I was so close but still unreachable.

And for the first time in the more than eight months since I told him to get out of my life and never come back, I caught myself wanting to call him.  To see how he is.  To see if he's better, more put together, grown up at all.  Even as those thoughts raced across my mind, I knew it was crazy, I knew I couldn't contact him...but I also couldn't stop myself from missing him.

Why?  Why would I bother missing someone who spent years playing with my heart and abusing the feelings he knew I had for him?  Why would I want to talk to someone who knew I was willing to risk everything for him and used that to try to break me?

I miss the person I believed with every piece of my heart that he was until I found out the truth.  I miss the feeling of security that washed over me every time we talked.  I miss feeling free to say whatever was on my mind, that feeling that let me tell him things that no one else - not even Matt - had ever heard.  I miss feeling wanted, in a way that no other guy has ever wanted me.  I miss how safe I felt with him.

If that guy were real, I believe something beautiful could have happened, but he's not.  That guy is only the picture he created to get me to fall for him way too hard.  The real him used my feelings to try to destroy some of my most valued relationships.  The real him disappeared just when I thought things were okay.  The real him left me wondering if any of the past 3 years had been the truth.

That would be what I'd say if I could talk to him again, if I had run into him on that same beach this afternoon.  Why?  Why would he put 3 years into fabricating a friendship with me for nothing but his own twisted pleasure?  Why did he have to use me like that, couldn't he have found some other way to reach the end he sought that didn't involve stringing me along and breaking my heart?  Was any of it real?  Did he ever love me like he said he did?  Were any of the countless sweet things he said to me during those late nights the truth?  Or was I just a toy that he could use to torment someone very close to me, because he knew that in my heart I had already picked him over her?

But those questions are all just going to have to fade away because I can't reopen that wound.  I've cried too many tears over him as it is.  His presence in my life did nothing but create damage and heartbreak, and that's not what you keep around.  I risked destroying, beyond repair, a relationship that I can't ever totally escape, and he told me it was all a joke to him as soon as I was about to really choose him.  I may miss him, or at least the person he had me believing he was, but I know myself well enough to know that one conversation will plunge me back into that whirlpool of drama.  So I can't.  An attempt at closure would do exponentially more harm than good.  I have to sit with these questions and pray that one day I'll forget these feelings that resurfaced on a simple summer day.  Maybe one day thinking about him won't hurt.

The girl who usually never lets go until she gets closure is finally learning to let go without it.

Release...my One Word taking on a meaning I never expected it to.

On a lighter note, here are the beach pictures from Sunday.  I forgot to upload them.  This is at a different beach than the one Mom and I went to today...hence the sudden onslaught of memories. 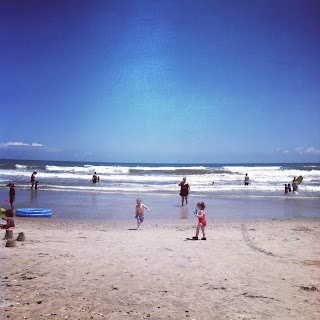 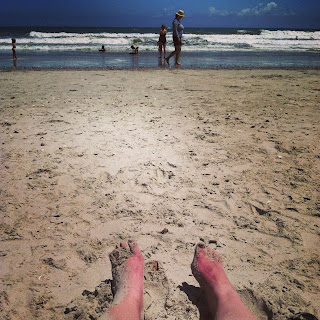 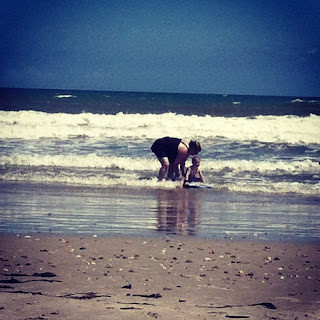 Labels: guys, me, One Word