A Birthday and a Birth Day

First, I can't believe I forgot to mention that yesterday was Holly's 23rd birthday! I texted her just after midnight and dedicated my Facebook status to her all day yesterday. So happy (belated) birthday to my darling sister!

Second, YAY BABY! My cousin Melissa (my dad's oldest brother's daughter) had her second baby boy today! She's 28 and actually got married on June 17, 2005. We weren't invited because her parents really don't like my mom at all, and needless to say, my mom isn't exactly a fan of theirs, either, but anyway...We're Facebook friends. She had her first boy on February 23, 2009, Greyson Scott (I'd never seen the name spelled with an -ey- till him.) And today she welcomed 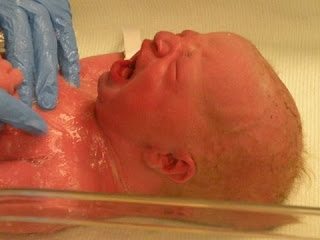 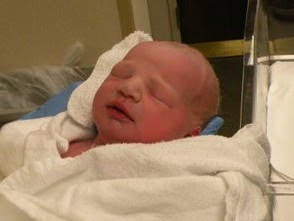 Rylan Cole
7 lbs 12 oz
20 1/2 inches
Isn't he cute? Not as cute as Blake, of course, but still pretty darn cute. ;) Haha! And I love the name Rylan, and was not expecting her to use it at all because it's uncommon. I've only heard it one other time in my entire life.

The funny thing about this was that her due date was December 13th. My mom's due date with Holly was also December 13th. So when she posted asking people when they thought he would arrive, I said December 3rd because it's Holly's birthday, and all. Well, arriving today meant that he was 9 days early, and I was 9 days early. And he was born at 2:37 pm. Chelsea was born at 2:38 pm. I just think all of these similarities are cool. (I know I'm a little weird, you don't have to tell me.)