Man oh man, babysitting is exhausting.  If I wasn't already sure of the fact that I don't want to have kids any time soon, Blake would be the perfect birth control.  He is a mess, and I love him to pieces, but he is exhausting!  Thankfully, when he took a nap, I got to take a nap, too.

Also thankfully, his daycare is open for part of the day tomorrow, so Mom and I can get some serious work done around the house while Chelsea is at work without him getting into trouble.

After dinner tonight, we had to go to Walmart because Chelsea needed to finish buying Blake's Christmas presents.  I know, I know, waiting until two days before Christmas wasn't exactly the brightest idea, but she planned on getting it done a couple days ago on her day off, but her friend who was supposed to take her got her license suspended so she couldn't.  Walmart two days before Christmas is insane.  I went shopping through the food section for stuff Mom had forgotten with Blake in one cart while they went to the toy department.  This way he couldn't see what they picked out for him.  I was done way before they were, so I basically walked in circles with him until my legs hurt so bad I was almost in tears because he would throw a fit anytime he stopped moving. 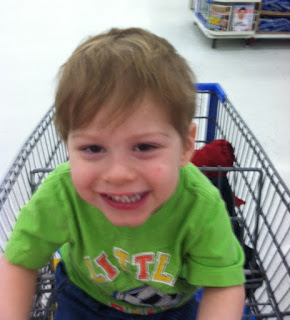 This is a picture I snapped while in the store.  Just so you can see how cute he is.  I'm amazed he stopped squealing long enough to pose for a picture.  He was talking (more like yelling) the entire time we were walking around.  He certainly loves to talk to people.  People love to talk to him, too.  Look at that face; how could you not? ;)

Then, we came home and things got really ugly between me and Chelsea.  I lost it.  There's good news, though.  Alex called me as I was sitting in my room crying, and that kid always knows what I need to hear.  I was smiling by the time we were done.  I also texted a friend who sent up some prayers on my behalf.  And after I got off the phone with Alex, I was sitting in my room reading my Bible and praying, and Chelsea actually apologized voluntarily and completely unprompted.  I don't even remember the last time she apologized for anything, let alone the last time she was the first one to apologize.  (Yes, I apologized, too.)

God is so awesome.