I've never been a big fan of reading.  Surprising, right?  Especially for someone as big of a nerd as I am.  But it was just never something I liked spending my free time doing.  Maybe because I'm the kid who does all her reading assignments for class so the last thing I wanted to do in my free time is pick up a book, maybe because I prefer things to be acted out in front of me so I can see it to understand it instead of just hearing about it.  I don't know.  The point is that books were never really my thing.

Over the past few years, thanks to an online Christian book club hosted by two of my favorite bloggers, I slowly started coming into the world of reading for fun.  I wasn't able to participate in all of the studies because of school and whatnot, but the books I did read captivated me just as much, if not more than, the accompanying videos did.  Still, though, I can't remember the last time I read a book simply because I wanted to.

Last Tuesday, I was talking to Taylor about the blog post from the night before and his reaction to it.  In the middle of the conversation, he asked for my address.  "I may have a present for you."  We had just talked about Radical by David Platt, so I asked if he was sending me that book.  All he told me was that it was a different book, but a book, yes.  That little stinker loves his surprises!  :)

After confirming with him that he had gotten the book in the mail, I went to the post office Monday afternoon and pulled out this. 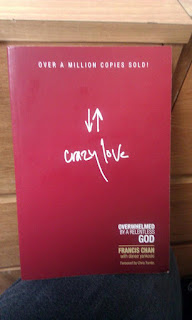 Crazy Love by Francis Chan.  I could hardly believe what I was holding when I opened the package.  I've wanted to read this book for quite some time, but had never mentioned it to Taylor, and here, he had sent me a book I was planning on buying myself with my Christmas money (along with Radical).  God is in the details, and I have such sweet friends.

Now, I was originally planning on waiting to start reading this until after finals were over, but I was sitting here in my room tonight relaxing in the relief that all my papers were handed in on time, and I kept looking at the book sitting on my desk.  Actually, staring was more like it.  I felt this urge to pick it up.  So I did.

Chapter 1 and the accompanying videos on Chan's website spoke to one of my biggest struggles: coming to terms with the fact that God is a God who created everything that exists - He created every galaxy, every planet, every star - and yet He still screams with a burning desire to know me.  I spent too much of my life running away from that simply because I was full of guilt over believing I didn't deserve the attention.  Now, I can't run, because I'm too busy staring in awe at the knowledge that after everything I've done, He still wants me.

In Chapter 3, Chan talks a bit about the relationship (or lack thereof, really) he had with his dad and how that affected His view of God.  It was something I could completely relate to.  While Chan and I come from opposite sides of the situation (he lost his mom, I lost my dad), I could relate to how it made him feel like he didn't deserve God's love, patience, and mercy.  It reminded me of how I spent so long trying to find my worth in broken people who could never satisfy the need I have for love.  Growing up without a father figure can leave a girl without knowing her self-worth or how she really deserves to be treated.  That was me, every single day, for a very long time, so desperately just wanting to be loved, thinking because the only guys that ever paid attention to me were the ones that lied to, used, and emotionally destroyed me that that was all I deserved.  It still is my sisters.  I watch them putting their entire worth into whatever guy is paying attention to them, and my heart just breaks because they have no idea what they're missing.

He also spoke about how people, in our arrogance, act like God owes us an explanation for what He chooses to do in our lives.  Guess what: God doesn't owe us anything when He already gave us everything just to save us from ourselves.  Prayer, at least for me, too often sounds like a drive-through order, and then I stomp my feet wondering why God won't just give me what I want when I'm a good person and I'm nice to people and don't I deserve something good in return?!

Ha.  Forgive me, Father, for I know not what I do.

The biggest lesson for me, though, was probably about what prayer is.  Sometimes I get so caught up in feeling like I'm not doing this Christian thing right that prayer starts to feel like I'm just talking to myself.  I forget that God hears everything I say and think, no matter where I am or what it is.  But here's what I learned tonight - prayer doesn't always have to be about words.  After all, God already knows all of our thoughts before we think them. He knows what we want to pray about even when our hearts hurt so badly that they keep us from finding the words.  Sometimes, prayer is just about sitting in awe of the magnificent, holy, perfect, loving God that we serve.  And I've definitely been doing a lot of that tonight.

If you're reading this, when you leave here, I pray that if you leave only having learned one thing, that that one thing is this:  You are wanted.  No matter what the world tells you, whether you're already a Christian and have been your entire life or have never been one but have been wondering what this whole Jesus thing is about, you are wanted.  There is a God waiting for you, waiting to give you the love that you've been searching for in all the wrong places.  You feel insignificant to people in your life, but you are not, you never have been, and you never will be insignificant or unimportant to the One who created you and knew you before you existed.

Let go of your past.  Quit beating yourself up for those mistakes.  Give your heart to God, and Jesus will bend down, lift up your face, look you straight in the eye and say, "I do not condemn you.  Go and sin no more."

Labels: books, God, me, The Vespers